Ryan Garcia easily made weight on Friday coming in at 138.8 lbs for his 12-round main event return bout against Emmanuel Tagoe on Saturday night at the Alamodome in San Antonio, Texas. Tagoe weighed in at 138.2 lbs. The fight will be shown live on DAZN.

We don’t know too much about Tagoe (32-1, 15 KOs) because he’s fighting under the radar through most of his career, and not getting a lot of attention. He’s won his last 32 fights, which isn’t easy to do even if you’re not fighting the best opposition.

This will mark the first fight that the 23-year-old King Ry has Joe Goosen in his corner, as he’s the replacement for Eddy Reynoso. Ryan felt that he needed to make a change after his seventh-round knockout victory over Luke Campbell last year, and Goosen was the man for the job.

To put himself in a position for a big fight against Gervonta ‘Tank’ Davis or the winner of the George Kambosos Jr vs. Devin Haney contest, Ryan Garcia (21-0, 18 KOs) needs to shine against Tagoe on Saturday night.

Ryan wants to score a knockout over Tagoe to let the other top fighters in the 135-lb division that he’s back and means business. Tagoe is a slick fighter, who is hard to hit, and won’t make it easy for Ryan on Saturday night.

The most notable fight on the Garcia-Tagoe undercard is super middleweight Gabe Rosado (26-14-1, 15 KOs) taking on Shane Mosley Jr. (17-4, 10 KOs) in the chief support bout. Both fighters are coming off losses, but Rosado should have too much for Mosley.

“If I had a fighter and I was called by Ryan Garcia’s team and I cared about that fighter, I would be very careful because Ryan is a dangerous guy,” said Joe Goosen to Fight Hub TV.

“Don’t let that nice little personality fool you. When he gets to the gym, he turns a switch on that is quite aggressive, and he can back it up with all sorts of technical qualities that he has. Defensively, speed-wise and accuracy.

“Look, let’s be honest. Ryan has power, he’s had it since he was 17. That was one of the attractions when he trained at my gym when he was a 17-year-old. He was putting a hurting on grown men back then.

“So, he always had that innate quality to where he had power as a thin-framed kid back then. He could hurt you. So, he’s always had that, and he turns his knuckles over really good. That’s one of the things he does, and he gets his body behind his punches.

“He’s got a real quick-twitch shoulder, he’s really good and does all the right technical things to hurt you with a punch.

“So his hands are in the right position, his shoulders work the way they’re supposed to, and then he’s got that incredible speed and timing.

“The timing of the punches are really important. So he’s got so many qualities that make his punch good. From the outside looking in, I’m observing Ryan and watching everything he does.

“If I have any slight suggestions to improve him, but it’s not something I have to concentrate on. It’s something that’s already there for the most part. But again, there’s always room for improvement no matter how good you are at anything, including doing interviews,” said Goosen. 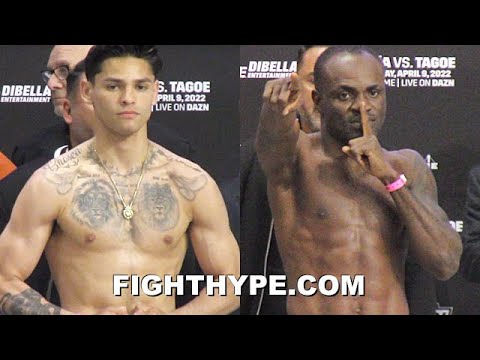