The WBO has ordered middleweight champion Demetrius Andrade (31-0, 19 KOs) to defend his title against #2 Janibek Alimkhanuly (11-0, 7 KOs) in his next fight. They now have 20 days to negotiate a deal before it goes to a purse bid.

Alimkhanuly is arguably the most formidable foe of Demetrius’ thirteen-year professional career, and there’s a genuine potential that he could lose.  If Andrade is beaten, that will essentially close the door for him getting lucrative fights against Jermall Charlo, Gennady Golovkin, and Canelo Alvarez.

The unbeaten 2016 Olympian Alimkhanuly, 28, is getting the title shot because the previous World Boxing Organization mandatory Jaime Munguia passed up on the opportunity to challenge Demetrius for his title. Munguia would instead try and get a title shot against IBF 160-lb champion Gennady ‘GGG’ Golovkin.

The dangerous-punching Janibek, from Kazakhstan, isn’t the fight that Matchroom Boxing promoter Eddie Hearn was hoping to get for ‘Boo Boo’ Demetrius.

Hearn has been banging the drum loudly for WBC middleweight champion Jermall Charlo or Munguia to face Andrade, but it’s not happening.

Now, Andrade finds himself in the position where he’s got to defend against a dangerous opponent in Alimkhanuly, and it’s not a given that he wins. 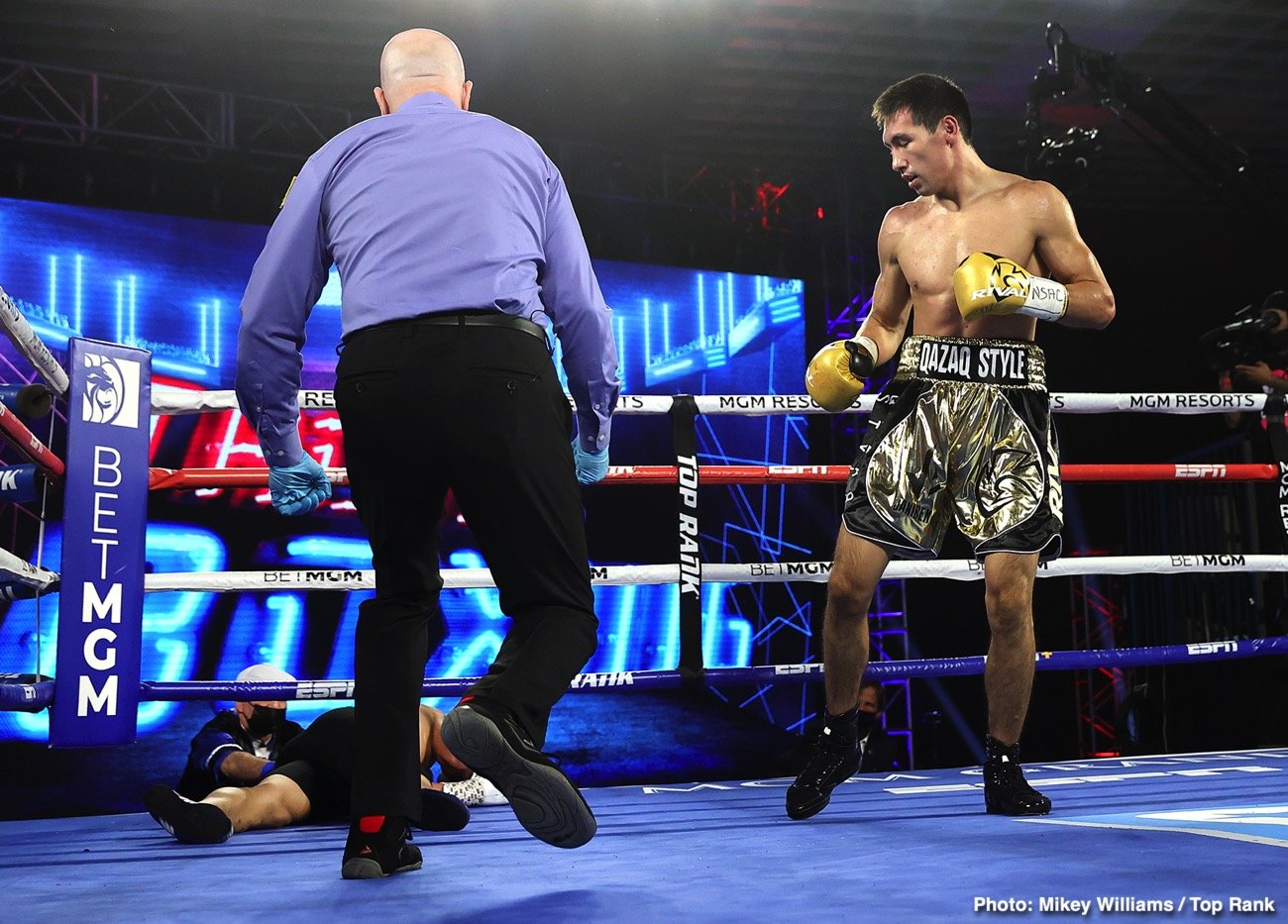 Alimkhanuly is coming off an eight round knockout win over former WBA/WBO middleweight champion Hassan N’Dam on November 20th. Before that, he defeated former WBA champion Rob Brant by an eighth round technical decision last June.

“Good, I have a great relationship with Demetrius,” said Eddie Hearn to Boxing Social. “Away from not delivering him a marquee fight, we’ve paid him a lot of money and kept him very active. That’s the number one priority of a promoter.

“The Canelo fight is NOT there for Demetrius Andrade,” said Hearn. ”

“The second is to get big fights. I’m quite honest in my assessment in that I don’t know what else I can do. I have failed in getting him [Demetrius] a massive fight, but I’ve kept him active and paid him a lot of money, and I’ve tried my best to continue chasing these big fights.

“If you can’t get him that big fight, what do you do?” said Hearn. “The contract will come to an end, and we still have fights with Demetrius., but at the same time, I want to see him fight [Jermall] Charlo.

“I want to see him fight Golovkin. I want to see him in all of those fights. If I can’t deliver them for him, I’d rather see him get them than worry about me. But we’ve got a good relationship. I respect him and think he’s a tremendous fighter.

“He respects us for being a 100% honest with him, and I want to stay in this. I don’t want to give up, and that’s why we wrote to the WBC to petition than to order the [Jermall] Charlo fight.

“It’s within their rules to do so; it’s in the best interest of boxing. Tell me a fight fan that doesn’t want to see Demetrius Andrade against Jermall Charlo.