WBC heavyweight champ Tyson Fury has let loose in (yet another) tirade on social media, with the 34 year old “retired” fighter tearing into rival heavyweight ruler Oleksandr Usyk. Usyk has made it very clear he wants to fight “crazy man” Fury, next year, after his injuries heal – Usyk having picked up, amongst other things, two black eyes in his repeat win over Anthony Joshua.

But Fury claims Usyk is “hiding” and he “ain’t got no injuries.” Fury, showing a real lack of class in referring to the Ukrainian as all manner of things (you know Fury’s style and his often-crude choice of language when attacking another fighter, so there is no need to repeat his blathering here), says he wants the fight in December. 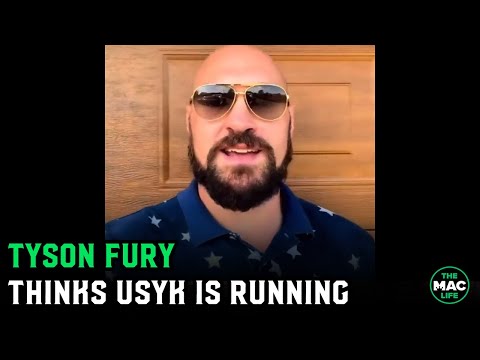 But this seems to be too soon, with Fury surely knowing Usyk is in no way “running” or “hiding” from him. Despite his trash-talk, Fury surely respects Usyk and his talents. Fury did go on to say that it “doesn’t matter” when the fight happens, that he will crush Usyk whenever and wherever the fight takes place.

And the whole world wants to see this fight happen, to see which brilliant fighter wins. But Fury didn’t stop after laying into Usyk; he also engaged in a brief argument with Manuel Charr. Charr called Fury out, with Fury saying how, if Usyk doesn’t want the fight with him, Charr “can get it.”

Okay, nobody wants to see Fury beat up on the 37 year old, inactive Charr (who is surely looking for a big payday, and who can really blame him?), but this doesn’t mean it won’t happen.

Might Fury take the Charr fight by way of a tune-up as he waits for the Usyk showdown?