Dillian ‘The Body Snatcher’ Whyte says he wants to fight Anthony Joshua in December. Whyte (28-3, 19 KOs) disagrees with the idea Joshua’s promoter Eddie Hearn has about scheduling the fight for 2023, while AJ takes a couple of tune-ups.

Joshua (24-3, 22 KOs) is coming off a second loss to Oleksandr Usyk, so it’s understandable why Hearn wants to put him in with a top 15 contender for December.

Although Whyte, 34, looked horribly poor in his sixth round knockout loss to WBC champion Tyson Fury last April, he’s a lot better than that. The reason Whyte looked bad is that Fury is so good and almost impossible to beat right now.

“By next week, I should have something significant,” said Dillian Whyte to iFL TV about his next fight. “I want to fight all of these guys. I want to fight the best guys.

“He’s got a title, so it’s a possibility,” Whyte said about a fight between him and WBA ‘regular’ heavyweight champion Daniel Dubois. “Joshua just lost, and that’s a rematch that I want, and it’s one the British public wants to see as well.

“There’s interest in that worldwide as well. That’s a big one. Eddie Hearn says he wants to fight in December, then let’s fight,” Whyte said in reacting to Hearn saying that he wants Joshua to face a top 15 contender in December and then Whyte in 2023.

“He tried his best, and Usyk was better than him on the night, obviously,” said Whyte about Joshua’s loss to Oleksandr Usyk. “It wasn’t a hard fight physically for him, but it was a hard fight mentally for him.

“He’s just going through a lot of things at the minute. I think it all became too much for him, and he broke down. You could see that he was showing signs of pressure and stress after the fight. He couldn’t deal with it.

“A lot of these guys don’t know how to deal with defeat. No one wants to lose, but life is full of ups and downs. You have to deal with the ups and the downs. You can’t just start crying just because you lost,” said Whyte. 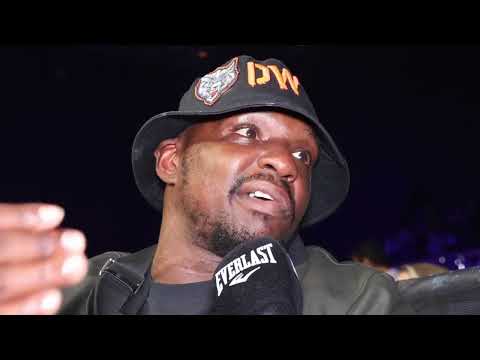