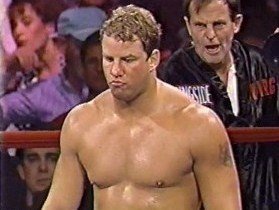 As part of the hugely enjoyable 30 for 30 series, ESPN will, on September 13, put out a show devoted to late heavyweight puncher and former WBO champ Tommy Morrison. The trailer is available now and going by the teaser this one should be excellent.

Morrison, who sadly passed away at the age of just 44 in 2013, sure crammed a lot into his short life – and not all of it was good. A true American tragedy, Morrison – at one point in time the quintessential blue eyed, blonde haired all American kid – suffered a most rapid fall from grace.

By his own admission, Morrison “blew it” when he could have been a great role model/hero to millions. Being shockingly diagnosed with the HIV virus in 2006 (Tommy maintaining, right to the end that the diagnosis was incorrect) Morrison saw his fighting career dissolve, with many millions of dollars doing likewise.

Though he did, quite astonishingly, return to the ring, even winning the odd bout, Morrison was all done when news broke on his condition. But during his career, a genuinely up and down one, “The Duke,” as Morrison was known (supposedly because he was a distant relative of movie legend John Wayne; real name Marrion Morrison) proved the many critics who claimed he couldn’t fight and was merely a Bill Cayton hype job to be so wrong.

After taking one savage, potentially career ending KO beating at the hands of rock-solid former Olympic gold medal winner Ray Mercer (Mercer appears in “Tommy,” stating on camera that Morrison hit him harder than anyone else ever managed throughout his career) Tommy showed real heart in coming back.

That he fought again after that sickening, close to 30-punch KO at the hands of Mercer is one thing – that Tommy managed to pick up impressive wins over the likes of George Foreman and Donovan “Razor” Ruddock is another.

Tommy beat Foreman by decision to win the WBO belt, surprising everyone by sticking to a smart hit and move boxing game-plan against the lumbering but lethal “Big George.” While Tommy’s thrilling KO win over Ruddock two years later in 1995 came after the two bangers had engaged in one of the most violent heavyweight slugfests of the decade.

Shortly after this fine win, however, Tommy’s insatiable sexual appetite caught up with him in the worst possible way. It was over and Morrison knew it.

If only the young Tommy had paid full attention when sage old slugger Foreman whispered so many words of wisdom into his ear just after Morrison had out-pointed him.

What more of this particular boxing tale might be revealed in “Tommy?”