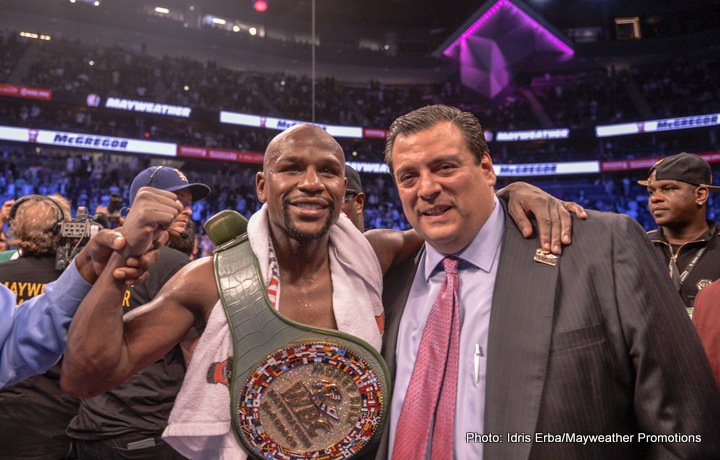 FLOYD MAYWEATHER – There could be no other topic for my column of today other than Floyd Mayweather.

Before I start, I would like to invite all of you to reach out and help the victims of Harvey in Texas. There are many ways of doing so, the WBC is doing activations to raise funds and direct such to the proper entities handling this crisis. But there are many ways you can help, even with just making a phone call.

Saturday night was magic. Boxing is, without a doubt, the overall winner. Millions of non-boxing fans watched a boxing match which was entertaining, competitive, and even dramatic and millions of those will now follow our sport.

Floyd Mayweather represented boxing and did it with bravery and pride. Most thought he would outbox Conor McGregor in an easy 12-round decision, and to the surprise of all, Floyd came to fight and never did he step backwards. He took the risks he had not taken in many years – he stood up against a much bigger, stronger, and heavier McGregor and was brilliant in his game plan, the greatness of boxing, the strategy, the step-by-step victory.

It had a dramatic beginning, as he seemed to be having difficulty figuring out how to fight McGregor and his unique, awkward, never-seen-before style. Size was evident and three rounds went on with uncertainty. At times, it felt as if it was Sugar Ray Leonard fighting Donny Lalonde. Floyd didn’t back up, used a body attack masterfully, took risks by standing toe-to-toe to exchange punches, and knocked out an exhausted McGregor.

McGregor has earned the recognition of the world and has many years to continue his career in MMA and perhaps in boxing. He must be praised for his effort, as well as his humble acceptance of defeat and exemplary behavior after the fight, which again is the trademark of boxing – fighters hugging each other after the fight #Brotherhood.

Floyd has announced his retirement from boxing, and it seems this is final. I certainly hope this is the last time we see the greatest fighter of this era in the ring, as he is going out on top, with millions in the bank, a family, health, and a bright future for any activity he wishes to take on.

I have known Floyd Mayweather for many years. My father loved Floyd since the first day he saw him fighting on the undercard of some boxing event. Floyd came to him and said he wanted to fight immediately for the green belt: “I’m ready now. It has been my dream since I was a kid.” Well, he was still a kid, and my father told him to be patient and his time would come. It certainly did, and Floyd defeated Genaro “Chicanito” Hernandez to win the WBC super featherweight title. When my father put the belt on Floyd, he just turned and gave a big kiss to Don Jose. Ever since that moment Floyd has been Green and Gold, capturing WBC championships in fivedifferent weight categories, as well as winning the special “Diamond,” “Gold,” and “Emerald” belts.

The McGregor fight was a fight full of uncertainties. There were tough critics against the event, and it was considered an event only for money. It captured the attention of the world. When that bell rang nothing was about money – it turned out to be a great fight for honor and pride. Floyd represented boxing, McGregor represented MMA, and they did just that – fight. They both wanted to win and gave the world a sensational spectacle which exceeded most, if not all, expectations of the “Money Fight.”

Floyd is flashy, flamboyant, and loves the attention, but that night was the true Floyd Mayweather. He fought and he stood tall representing boxing, making sure the sport came out victorious and proud. He was humble in victory and embraced Conor after the fight, and he was that little kid when his mom and dad were with him in the ring – it was a highly emotional moment to witness with whispers and kisses, and tears of joy.

Now Floyd has a responsibility for this and future generations. He must lead the way and live in an exemplary manner, save his money so it lasts for his lifetime, give back to boxing through Mayweather Promotions, teach discipline, hard work, and dedication to his fighters, and become the role model world heroes represent to the youth of the world.

Thank you, Floyd. You are and will always be a very special champion and friend to the World Boxing Council.

Thank you and I welcome any comments, ideas, or suggestions at contact@wbcboxing.com.