Thrill-a-minute heavyweight warrior Tommy Morrison should be celebrating his 52nd birthday today, but as we all know, Tommy passed away at the far too young age of just 44 back in September of 2013. Morrison lived a fast and exciting life, which was the same way he fought in the ring. One of the most exciting heavyweights of the 1990s, Tommy gave us a number of great action fights.

After having fought in a number of tough man bouts (this when underage), Morrison compiled a 202-20 amateur career, during which he boxed in the Olympic trials (running into a guy named Ray Mercer, losing on points). Then, at age 19, Morrison went pro. Soon spotted by Bill Cayton, Morrison became “The Duke,” and he was on his way to becoming the next heavyweight superstar. Tommy – supposedly a distant relative of movie legend John Wayne, hence the nickname – might have fallen short, but he sure made his mark on his sport and on his weight class.

For a good number of people, the brutally punishing fifth-round KO Morrison suffered at the hands of Ray Mercer in their 1991 fight signalled the end. To these people, Morrison, a hype-job who was a better actor than fighter (Tommy of course getting that big role in ‘Rocky V’) would not amount to anything after having been destroyed is such an X-rated manner by the man known as “Merciless.” Instead, showing real character, Tommy did come back. More than that, he became a much better fighter than he had been.

After regaining his confidence with wins over Bobby Quarry (today the last surviving Quarry brother), Wimpy Halstead, Kimmuel Odum and Art Tucker, Tommy gave us his first heroic win. Slugging it out with the tough Joe Hipp, Morrison had to overcome the pain of a busted jaw and near exhaustion as he stopped Hipp in the ninth round of a FOTY contender. For the first time, Morrison had shown he could take it as well as dish it out. Morrison then had to get off the floor to stop veteran Carl Williams in another exciting battle.

But in June of 1993, against living legend George Foreman, Tommy pulled off THE win of his career. And he did it in such a surprising way. Expected to slug it out with “Big George,” Tommy instead boxed and moved, quite brilliantly. The lethal but lumbering Foreman was widely out-pointed and Morrison was the brand new WBO heavyweight champ.

Unfortunately, Morrison’s reign did not last long. After a bizarre win over extremely late sub Tim Tomashek – who had literally been drinking beer in the arena before he was drafted in as a show-saving replacement for Mike Williams – Morrison was run over by huge underdog Michael Bentt. Morrison, done in inside a round, had blown a massive fight with Lennox Lewis. It was time for comeback #2. 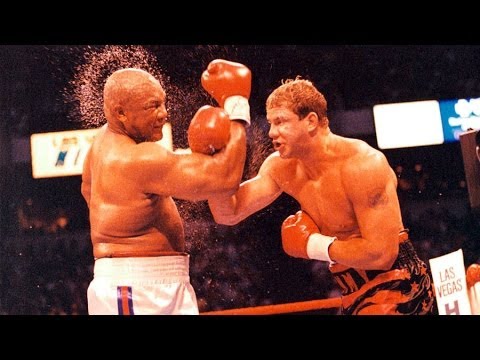 Tommy picked up three decent enough wins, he was then lucky to get a draw in his battle with Ross Puritty (Tommy’s chin again letting him down, his heart and courage seeing him through), before, in June of 1995, “The Duke” scored the most dramatic win of his career. Facing the dangerous Donovan “Razor” Ruddock, Morrison won an epic slugfest, his toughness, his punching power, his overall ability now confirmed to all. Now the Lewis fight was back on. Tommy was comprehensively beaten by Lewis, the fight not turning out to be the thriller many felt it would. And then, just one win later, Morrison was shockingly diagnosed as having HIV. His career was over.

Well, not quite. Insisting to the end that he was not HIV, Tommy came back for two fights, one in 2007, one in 2008, both KO’s. Five-and-a-half years after his win over Matt Weishaar in Mexico, Tommy was dead. It was a sad end for such a great fighter, a man who was by all accounts a great guy.

But Tommy’s legacy lives on, his millions of fans refusing to ever forget him. His two sons are pro fighters, both of them also keeping his name alive. Morrison’s final ring record reads 48-3-1(42). He was far, far more than a mere hype-job.