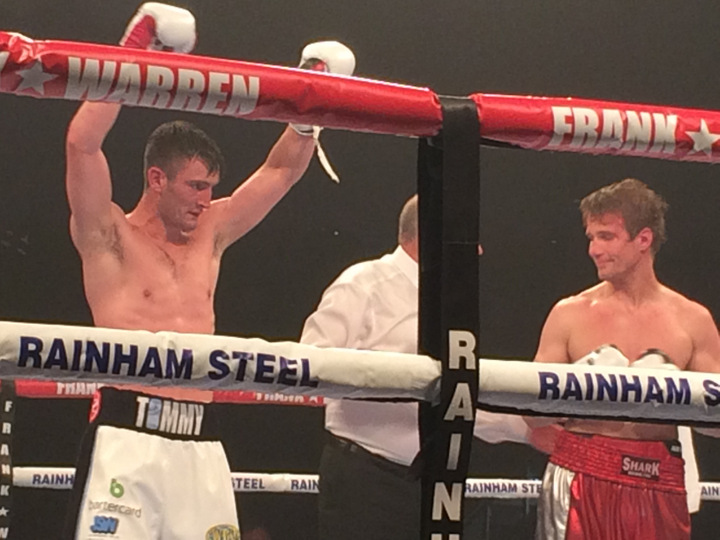 Bideford-born Langford (17-0) retained his WBO Inter-Continental middleweight belt by defeating former Finnish national champion Timo Laine (15-7) in round seven of their scheduled 10-round title fight at the Ice Arena in Cardiff on Saturday 16th July.

A late replacement opponent stepping in for former German national champion Ronny Gabel, Laine was completely outclassed, outworked, outboxed and outfoxed for the entire 19 ½ minutes, despite entering the contest off the back of an outstanding five-fight winning streak, four of those ending inside the distance.

From the opening bell, Langford, 27-years-old from Birmingham, established his range and dominance early, and if there were any fears of the short notice switch having an effect on the unbeaten Devonian, they were soon dispelled.

The Helsinki man started the fight by waving his left hand out in circular motions and looked to land a few jabs of his own; and actually had some success midway through the round with a double jab, right hook to the body and left to the head of Langford. He moved well as he was hunted down by the WBO titlist but was caught in the corner with a left hook followed by a big right hand in the final minute.

From thereon, Langford had it all his own way, swarming the 32-year-old challenger with an incredible variety of punches and setting a high work rate that the Finnish middleweight couldn’t match.

It was a perfectly polished performance from the titleholder, clearly pleasing the 300 travelling fans from Birmingham and Devon.

Referee Phil Edwards kept a watchful eye on the Northern European, who kept glancing towards his corner from round three onwards, and arguably should have stopped the fight earlier.

The Baggies Bomber displayed an assured, accurate busy display and pleased spectators with subtle tricks of the trade such as slight sidesteps designed to create enough space to whip in the body shots and clever Sugar Ray Robinson trademark tactics of pulling the opponent’s gloves down to land shots. More recently, two-time Olympic gold medalist and two-weight World champion Vasyl Lomachenko has been seen mimicking the mischievous move to great effect.

With the challenger covering up in survival mode, Langford intelligently used tippy-tappy punches on the gloves of his opponent to entice him into firing back to create further openings. It was extremely clever, mature, superior tactics from the 6ft tall middleweight.

The relentless punching and non-stop stalking from the champion wore the travelling fighter down and the fatigue was visible in the second half of every single round.

A little frustration and perhaps slight bewilderment as to how the challenger was still standing in the sixth round, Langford hurled Laine to the floor just as the bell sounded.

Uncharacteristically, the Finn threw six jabs to kick off what was to be his final round, just one of those finding the target. With hands dropped low, seemingly from exhaustion, he was soon backed up onto the ropes where he spent the majority of the fight. Langford unleashed an avalanche of unanswered punches prompting the official to step in and finally stop the one-sided show.

It was a double celebration for Langford, who had his 27thbirthday on Tuesday, as he recorded his fourth stoppage victory in his last six fights and moved up to 17-0.

Full credit to the Baltic Boxing Union champion for taking the fight at such late notice but it was certainly a level too high and he wasn’t nowhere near ambitious enough to stand any sort of chance against the impressive champion. Badly marked, he was sent back to Finland with multiple bruises, abrasions and two perforated ear drums.

Post-fight, Langford stated, “He was there to survive and he didn’t make it hard for me to find the openings. I did what I had to do in the end.”

The 160-pounder will not be away from the gym for long as the British Boxing Board of Control have ordered Chris Eubank Jr. to defend his British middleweight title against Langford, the mandatory challenger; purse bids to be agreed by September.