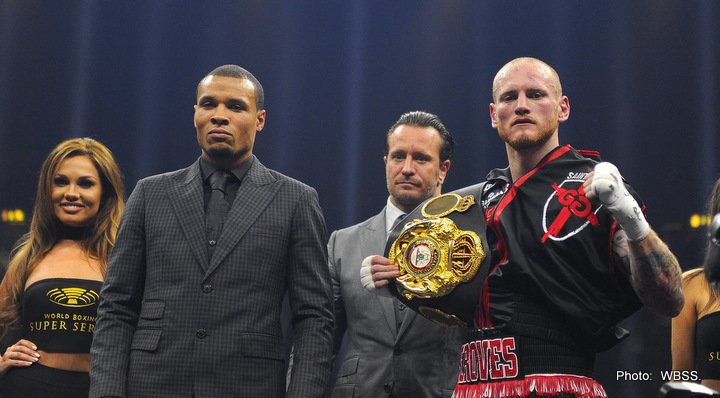 Tommy Langford, the 28-year old current title holder from Birmingham, is making the first defence of his British crown, after first capturing the title when defeating Sam Sheedy in 2016.

“This is an unbelievable event to be apart of,” said Langford. “The World Boxing Super Series is fantastic for boxing, and Groves vs Eubank is an exceptional fight. So it’s an honour for me to defend my British title on the undercard.”

“I know Jack Arnfield well, he’s a good fighter. But there’s no way he has enough to beat me. He better be ready come fight night!”

Arnfield, the 28-year old mandatory challenger from Blackpool, is making his second attempt to win the prestigious British title, after an unsuccessful challenge in 2015.

Said Arnfield: “I’m over the moon to be boxing on this massive show. I always perform my best on the biggest stage.

“I have sparred Tommy Langford before, so I know exactly what he’s going to bring. I’m not worried at all!

“I’m going to beat him up and punish every move he makes. I just hope there are no excuses after he loses.”

The Ali Trophy super middleweight semi-final between George Groves and Chris Eubank Jr. as well as the exciting undercard will be live on ITV Box Office on February 17. Fans can purchase the fight now at www.itvboxoffice.com where they can also get full details of how to watch.

Undefeated British super-middleweight Zach Parker (14-0, 10 KOs) has been confirmed as the reserve for the blockbuster World Boxing Super Series semi-final between domestic rivals George Groves and Chris Eubank Jr. on February 17 at the Manchester Arena.

Parker, who was recently announced as the mandatory challenger for Rocky Fielding’s British Super Middleweight title, will be on standby to enter the tournament in the unlikely scenario of one of the original participants being unable to continue.

Assuming Parker is not called upon to participate, the 23-year old from Derbyshire will face Spain’s Adasat Rodriguez (16-6-2, 10 KOs) in a 10-round contest on the undercard of Groves and Eubank Jr.’s hotly anticipated clash.

“It’s been a crazy year for me. It’s all come so quickly,” said Parker. “18 months ago I was boxing on the small-hall shows, and now I’m boxing on the biggest stage possible. I want to show people that I’m the best of them all!”

The 31-year old from Tenerife, who has previously shared the ring with World Boxing Super Series quarter-finalist Erik Skoglund, suggests his British opponent is in danger of overlooking him.

“This is a massive opportunity for me on the biggest stage,” said Rodriguez. “Boxing people all over the world will know about me after I beat Parker. People like to talk about Parker’s power, but I’m the bigger puncher!”

The Ali Trophy super middleweight semi-final between George Groves and Chris Eubank Jr. as well as the exciting undercard will be live on ITV Box Office on February 17. Fans can purchase the fight now at www.itvboxoffice.com where they can also get full details of how to watch.

“We have an opportunity to put on a mega fight. I can’t wait, it’s going to be epic!” said Eubank Jr. after facing off with Groves. Groves ended Cox’s unbeaten record Saturday night as he delivered a stunning right hook body shot to floor Cox.

“I was landing big body shots on Jamie, in the end it was a right hook to the body, it’s a crippling shot – I don’t blame him for not getting up,” said Groves now looking forward to fighting Eubank Jr.

“It’s going to be a great fight. Eubank has always been all-action. He has improved over the years but he hasn’t boxed anyone on my level. I know if I boxed like I did tonight, he doesn’t stand a chance.”

Cox worked furiously and fought with intensity from the first bell, but in the end he could not handle Groves’ greater power.

“He placed the shot greatly and he’s a very good champion. He prepared well, I made a mistake and he made me pay. It was a great fight until then,” said Cox.

“It was an honour being a part of this great tournament.”