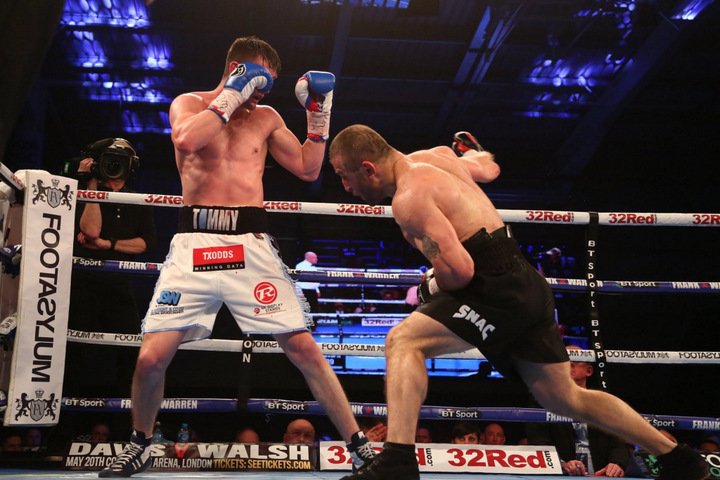 Khurtsidze was losing the fight until connecting with a hard left to the head of Langford that put him down on the canvas. Langford sprang back to his feet only to have referee Phil Edward stop the fight. Langford was none too happy about the fight being stopped. He wanted to continue fight, and for good reason, he was winning.

Langford was out-boxing the 37-year-old Khurtsidze until getting caught with a left hook that shook him to his boots. There’s no shame in Langford being knocked down by that punch.

If the same punch had landed on the chin of middleweight champion Gennady “GGG” Golovkin, it’s very likely that it would have knocked him out too. Khurtsidze is short at 5’4”, but he’s got major league punching power.
The referee Phil Edwards stopped the fight at 0:27 of round 5.

Langford was getting out of the way of Khurtsize’s big power shots in the first 4 rounds by moving, holding and not letting the shorter fighter set up his offense. Khurtsidze was still landing his power shots when he would cut off the ring on Langford, but he wasn’t able to get more than 1 to 2 shots off before Langford would tie him up or move away.

It wasn’t easy for Langford to clinch Khurtsidze because he was wrestling his way out of the clinches and landing hard body shots. You could tell that the body shots were having an effect on Langford because he didn’t look as mobile by the 4th. Khurtsidze was grounding him with his hard punches to the midsection.

Langford landed a lot of fast combinations to the head of Khurtsidze in rounds 1-4. The punches didn’t have enough power though to stop the forward progress of Khurtsidze.

Khurtsidze’s win over Langford now puts him in a title shot this Summer against WBO middleweight champion Billy Joe Saunders on July 8 in London, England.