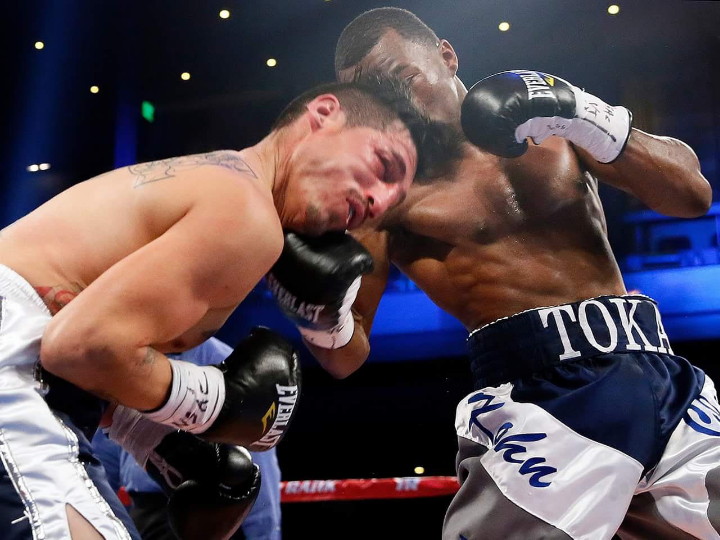 The undefeated rising super featherweight prospect Toka “T-Nice” Kahn-Clary (18-0-1 NC, 12 KOs) has faced more trials and tribulations by the age of 13 than most individuals face in an entire lifetime, nevertheless with the help of boxing, he has persevered through those difficult challenges and gotten off to an extremely successful start to his professional career.

“My childhood growing up was really tough. My dad left Monrovia, Liberia with my sister and I and brought us to Philadelphia, [Pennsylvania] when I was five-years-old. A year later, he was gunned down in the street, leaving my sister and me to fend for ourselves.” said Kahn-Clary. “We were homeless for a while and then we bounced around from one foster care home to another. I spent a vast majority of my childhood without any parental guidance and I never knew my mom nor do I’ve any idea how many siblings I’ve.”

Despite struggling to survive every day during his childhood, Kahn-Clary refused to give up and continued to fight, even when life appeared to offer little hope. Yet, despite all the obstacles he faced at such a young age, like struggling to find food and shelter each day or having to bike six miles to and from school no matter what the weather was, he never complained about his life nor felt sorry for himself. Instead, he embraced each day with a big smile and always tried to get the most out of every day, no matter how bad it was.

This perseverance and grit finally paid off for Kahn-Clary when a friend took him to visit Peter Manfredo, Sr.’s Boxing and Fitness Center in Pawtucket, Rhode Island when he was 14-years-old. After his first visit, he instantly fell in love with boxing and knew this is what he wanted to do for the foreseeable future.

“Boxing saved my life because without it, I don’t where I would be today. It gave me some much needed hope and excitement in my life and helped to keep me out of trouble that was constantly around me as I grew up,” Kahn-Clary. “I’ve put a great deal of time in boxing and I’ve gotten a lot out of it.”

The 23-year-old Providence, Rhode Island southpaw has looked extremely good through the first three and half years of his professional career under the guidance of his promoter Bob Arum of Top Rank. He has dominated every opponent he has faced, with the lone exception against Ramey Luna, who knocked him down twice in the fourth round, after which Kahn-Clary took over the fight and prevailed by a unanimous decision. Kahn-Clary’s boxing accomplishments can be traced back to his trainer Manfredo, Sr. who has been with him from the very beginning.

“Manfredo has played an instrumental part in my life and has helped me stay off the streets and gave me an opportunity to have a successful future. He has been loyal to me and stayed with me through my ups and downs. We’ve a great relationship with one another,” said Kahn-Clary.

Kahn-Clary’s boxing success continued last year as he went 3-0. He got 2016 off to a great start as he scored a sixth round knockout victory over the former WBC FECOMBOX and Mexican featherweight champion Gabino Cota on February 13th in Studio City, California. He dominated the entire bout and then ended it with a barrage of powerful punches that left Costa lying defenseless on the ropes which prompted the referee to mercifully stop the one-sided fight. Kahn-Clary has recorded three consecutive stoppage victories.

“He [Cota] was a good tough opponent and he fought well; however, I stuck with our game plan, executed it well, connected on my punches, and then in the sixth round, I saw that he was getting tired and his legs were buckling from my punches, so I applied even more pressure on him and wore him down so much that he couldn’t defend himself,” said Kahn-Clary. “I was pleased with the win and I look forward to 2016 being a significant year for me.”

Kahn-Clary’s victories in the ring are attributed to his impressive array of boxing skills from his lightning hand speed and tremendous power in both hands that when combined with his aggressive, overwhelming, volume-punching fighting style and impenetrable defense, it makes him extremely difficult to be defeated. In addition, he has gained invaluable experience while training with undefeated WBA super featherweight champion Javier Fortuna (29-0-1), up and coming contender Luis Rosa (22-0), and three-time Olympian and former world title challenger Rau’shee Warren (13-1). His young age, great work ethic, and keen ability to continue to improve each bout, will allow him to get even better in the near future. While there is no need to rush his career toward a world title fight just yet, he already believes he’s more than ready for that task.

“I wanted to fight the best boxers in my division and I know I’ll be ready at the end of this year to take on world champions, Gary Russell, Vasyl Lomachenko, and Leo Santa Cruz,” said Kahn-Clary. “I’m extremely confident in myself and I believe that I can accomplish amazing things when I get into the ring.”

Despite the fact that his life has finally turned around for the better, he still hasn’t forgotten what got him to this point in his life. He’s still an extremely modest fighter who’s constantly hungry and works harder than ever before to accomplish everything he set out to do in boxing.

“You should always be humble, hardworking, honest and true to yourself, and most importantly, you should always remain positive, and if you follow these attributes closely than you’ll overcome anything that life throws your way and accomplishment whatever you put your mind to,” said Kahn-Clary.

“My ultimate goal as an amateur was to make the 2012 U.S. Olympic Boxing Team which unfortunately didn’t happen. So after I missed the cut, I weighed out all the advantages and disadvantages for deciding whether to stay as an amateur and try out for the 2016 Olympics or not and after much debate, I decided that my best option was to go professional. I didn’t want to wait another four years for that opportunity to happen again and Top Rank wanted to promote me right away,” said Kahn-Clary. “Despite not making the Olympic team, I’m extremely happy with what I accomplished in the amateurs and I’ve no regrets.”

“I’ve a great team and I expect 2016 to be an even bigger and better year for me as I box against the top contenders in my weight class and get closer to fighting for a world championship,” said Kahn-Clary. “Hopefully in the not too distant future, I‘ll bring a world title back to Rhode Island.”