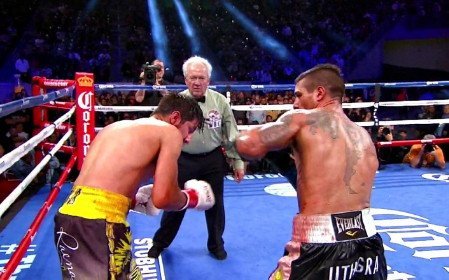 Julio Diaz (40-10-1, 29 KO’s) suffered a rib injury in the 3rd round tonight against interim WBA welterweight champion Keith Thurman (23-0, 21 KO’s) that caused the fight to be stopped at the end of the 3rd round a the StubHub Center in Carson, California. We didn’t learn anything from the fight other than the fact Thurman fights a lot better when he’s coming forward than he does when he’s being backed up and pressured.

It was clearly a huge mistake to make Thurman-Diaz the main event, because the fight was one-sided and not nearly as interesting to watch as the Lucas Matthysse vs. John Molina bout.

Diaz fought hard in the 3rd round, and had Thurman reeling after nailing him with some shots. During the flurry of action, Diaz was hit with a right hand to the body by Thurman, and that ultimately caused the fight to be stopped after the round. Diaz was cut in the same round on the side of his right eye.

Thurman knocked Diaz down with a left hook to head in the 2nd round. Other than that, the first two rounds were all Thurman with him landing hard shots against a timid looking Diaz.

After the fight, Thurman talked about being open to fighting Floyd Mayweather Jr. and Shawn Porter. A Thurman vs. Porter fight would be interesting, but Thurman is too slow for Mayweather and it would be like watching another Mayweather vs. Saul “Canelo” Alvarez fight, but perhaps much worse than that because Thurman clearly isn’t in the same league as Canelo.

In by far the best fight of the night, Lucas Matthysse (35-3, 33 KO’s) had to fight tooth and nail to defeat lightweight John Molina (27-4, 22 KO’s) by an 11th round TKO victory in a fight that was surprisingly competitive from start to finish. Molina dropped Matthysse twice in the fight in putting him down in rounds 2 and 5. However, the knockdowns seemed to enrage Matthysse, who was like an angry bull from the 6th round until he finished Molina off in the 11th round with a storm of shots to put him down on the canvas. Matthysse knocked Molina down in rounds 8, 10 and 11.

Read:  How Great Was Lloyd Honeyghan?

The fight became one-sided by the 9th, as Matthysse began to really dish out punishment on Molina. The ringside doctor checked out Molina after the 10th due to the punishment he had taken in that round. He let Molina come out for the 11th, but obviously that was the wrong thing to do because he was like a punching bag for Matthysse in that round. Matthysse backed Molina up to the ropes and tagged him with a series of hard shots to the head that resulted with Molina going down. The fight was then halted by the referee.

In another disappointing fight on the card, WBC lightweight champion Omar Figueroa defeated challenger Jerry Belmontes (19-4, 5 KO’s) by a 12 round split decision. Neither of these guys looked good, but Belmontes gave the fight away by running from rounds 6 through 12. It was hard to understand why Belmontes did so much running, because he was landing the cleaner shots when he was letting his hands go, and he probably would have won the fight if he had simply stopped running. The judges scored it 118-110, 116-112 for Figueroa and 115-113 for Belmontes.

Belmontes corner was asking him to throw shots, but he just kept running for some reason. He seemed to think he was out-boxing Figueroa, but the imagine that Belmontes gave off was that of someone who was reluctant to mix it up. He deserved to lose and it was a terrible fight to watch. The crowd booed nonstop from rounds 6 through 12, and neither guy did much to stop them from booing.

Had Figueroa’s management done their homework on Belmontes, they would have seen that he likes to move a lot in his fights. They could have saved themselves the trouble by not selecting him as opponent. After all, Belmontes had lost 3 out of his last 5 fights coming into tonight’s bout and it’s not as if he was a highly ranked contender.

Other boxing results on tonight’s card from the StubHub Center: