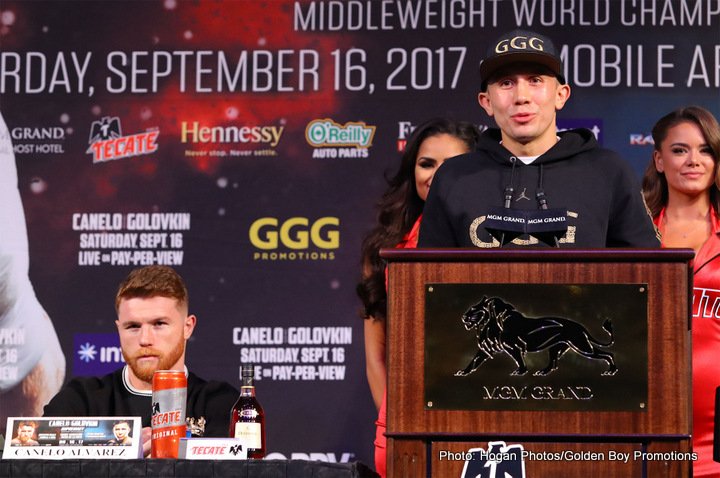 The long wait for one of the biggest and most anticipated boxing fights-of-the-year, that was three years in the making, is finally here as IBO/WBA/WBC/IBF middleweight belt holder Gennady “GGG” Golovkin (37-0, 33 KOs) squares off against two-division, and current lineal and Ring Magazine champion Saul “Canelo” Alvarez (49-1-1, 34 KOs) on Saturday September 16th, to determine once and for all, who is the better fighter. Their bout will be televised on HBO pay-per-view from the T-Mobile Arena in Las Vegas, Nevada.

This much hyped-up matchup between two top-tiered boxers has generated an immense amount of excitement in the sport, as demonstrated with twenty-four thousand tickets for the main event quickly selling out within a couple of days after being released to the public. The excitement from this matchup is certainly warranted because it is extremely rare in boxing for two elite fighters who are more or less, evenly matched, willing to fight one another (GGG is currently listed as a slight favorite at -160, although the line varies from site to site). Golovkin and Canelo both boast impressive records with only one loss between them in over eighty-eight bouts. They have combined to knockout seventy-six per cent of their opponents and they have never been knocked down. Furthermore, their fan-friendly, aggressive fighting style that predicates on them trying to brutally knock out their opponent, along with their great records has helped both of them obtain strong followings. Canelo is one of the biggest attractions in boxing who consistently sells out arenas, while GGG is not too far behind, as his fan base has rapidly grown after each explosive knockout victory.

Alvarez has won seven consecutive bouts, four by knockout after losing a twelve-round unanimous decision to the former pound-for-pound best fighter in the world Floyd Mayweather. He was only twenty-three-years-old when he sustained his first and only loss. During his current winning streak, he has defeated former world champions Erislandy Lara, Miguel Cotto, and Amir Khan, undefeated Liam Smith, and former world title challenger Julio Cesar Chavez, Jr., in his most recent bout.

He has youth on his side, since he is eight years younger than Golovkin (35 to 27). Canelo has the advantage when it comes to speed and defense. He throws more effective combinations than Golovkin and has a wider variety of them. Canelo will also be the much heavier boxer on the night of the fight since he gains upwards of twenty pounds from the weigh-in to the night of the fight, while GGG might gain half of that weight, if that, after the weigh-in. By being the bigger fighter in the ring, Canelo will close the gap in power punching, which Golovkin has the advantage.

The undefeated Golovkin is one of the best pound-for-pound boxers in the world, but is fighting one of the best opponents of his career. He knocked out twenty-three consecutive opponents before going the distance in his last outing to Daniel Jacobs. Golovkin will look to make his nineteenth consecutive middleweight defense, second to future Hall-of-Famer Bernard Hopkins, who made twenty. In his last seven bouts, he has beaten former world title challenger Martin Murray, and former world champions Marco Antonio Rubio, David Lemieux, Kell Brook, and Jacobs, the consensus second best fighter in the middleweight division.

GGG will be the bigger puncher in the ring as demonstrated by having the second highest knockout percentage of a current world champion at 89 per cent, second to WBC heavyweight title holder Deontay Wilder. He possesses the more commanding jab, which will help him control the action and set up his combinations and power shots more effectively than Canelo. GGG is the busier fighter who throws more punches per round, while Canelo has a bad tenacity to take off parts of rounds or even the entire round. He is also the much more efficient fighter. According to CompuBox, Golovkin is tied with IBF/WBA/WBO light heavyweight champion Andre Ward for the second best plus/minus in the sport at 15.1 (punches landed minus opponents connected shots). He is better suited for the middleweight division since he has fought in this weight class since he turned professional, in 2006. Alvarez meanwhile has only boxed once in the middleweight division when he fought Chavez, Jr. at a contractual weight of 164.5-pounds.

Canelo has performed better than Golovkin in his last two fights, however, that has more to do with the fact that GGG has faced the better competition in those bouts, especially in their last fight. Canelo easily defeated Chavez, Jr. who barely threw any punches, has never beaten anyone of noteworthy, and was boxing at a lower weight class. GGG nevertheless, beat one of the best fighters in the division, Jacobs who came into their fight winning eleven consecutive bouts, among them was a first-round knockout over former WBO world titleholder Peter Quillin. He also did everything he could to beat Golovkin and weighed at least ten pounds more than Golovkin on the night of the bout. GGG also scored an eighth-round knockout over Lemieux, another top-five middleweight boxer. Both of these victories are better than anyone Canelo has beaten and they are natural middleweight boxers. Arguably, the best boxers Canelo has beaten were Erislandy Lara in an extremely close, competitive bout and Cotto, and both of those bouts were at 155-pounds.

This should be an extremely entertaining and competitive bout and one that is extremely difficult to pick the winner; however, Golovkin should prevail by a close twelve-round unanimous decision. He is the better overall fighter who possesses more power, is the natural middleweight boxer, and more importantly, has fought the better opposition. Hopefully for boxing and for the fans’ sake, this bout lives up to its hype and gives fight fans something to talk about for years to come.