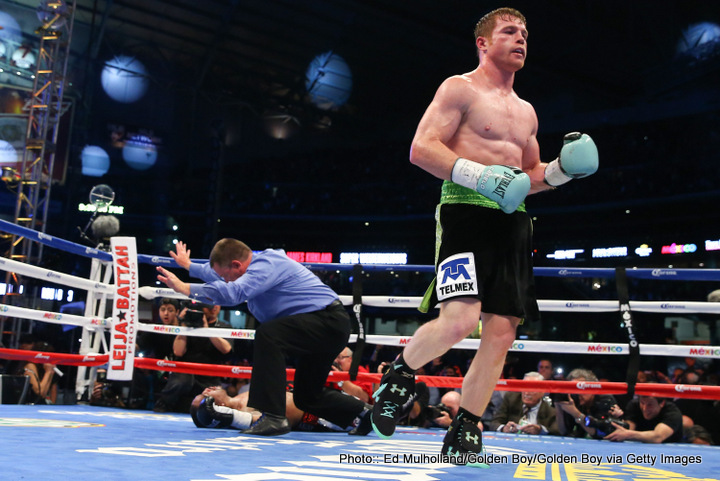 Well – I wrote yesterday that a couple of rounds of toe-to-toe action filled with drama would be better than 36 minutes of May-Pac and unless you are a total purist – I was proven correct. It was what we hoped for, albeit it for slightly longer maybe?

Though from the hurtful, venomous punches the Mexican star threw repeatedly how was Kirkland ever going to last? It looked like he was being used as a heavy bag by Alvarez whose mother, as always, cheered enthusiastically on from the sidelines.

The fans have been thrilled by last night’s slug fest from Minute Maid Park in Texas – and the young Mexican star did as promised when he absolutely sparked the Mandingo Warrior in spectacular fashion.

After repeating his habit of going down in the first, Kirkland showed warrior like spirit, yet little in terms of ring craft – succumbing to one of the most clinical right uppercuts I’ve seen.

We knew roughly what to expect from Kirkland and with no (former world champion) Ann Wolfe in his corner and after a long period of inactivity – it’s in no way shocking he was gone so early. His unheralded trainer will remain as such but maybe you can’t teach an old dog new tricks?

Kirkland fought completely the wrong fight but it was nothing we haven’t seen from James Kirkland in the past. In short, he was made for Canelo Alvarez.

After being obliterated by light hitting Ibihiro Ishida and down to Alfredo Angulo previously in his troubled career I think we have seen the last of James – at top level anyway. I don’t wish a Jeff Lacy style ending on any fighter but if any fighter goes that way – It’s Kirkland.

Yet for Alvarez – the future is very bright indeed.

The will he-wont he rumours surrounding a potential Autumn/Fall super-fight with Miguel Cotto seem to be blowing hot and cold. Cotto has Daniel Geale to fight first for his WBC middleweight title that is helping to lead him to perhaps unfairly being called another “catchweight king” – yet that’s another topic entirely.

De La Hoya wants it – and I’d heard it was almost a done deal before this one, provided BOTH come through – as Saul now has.

“June 6 (Cotto’s date) will be very important. After the May-Pac disappointment this is exactly what we needed.”

“It’s a natural. I think the fight is natural.”

Yet – fully aware of the uncertainty that leaves us all in the dark – especially until after Geale – he said;

“If I get to fight him – great. But I’m not going to hang my hat on it. If it doesn’t happen and we do not get to make it then I will continue.”

With little left at 154 to dine out on and avoiding a Lara rematch, the best challenges lie at 160, specified catch-weight or not.

GGG, Quillin, Lee, Murray, are all potential barn-stormers like tonight and I’ll leave you to draw your own conclusions as to how they would go and who else you would throw forward.

Yet at 154 – there is little credible left in my eyes that can match and sell the “superstar” status right now Canelo wants – barring Cotto or Golovkin and the latter I would love, I don’t think we will see – YET.

I’m banking on Cotto – IF he beats Geale – regardless of the negative press….

We’ll leave it on a question mark ?