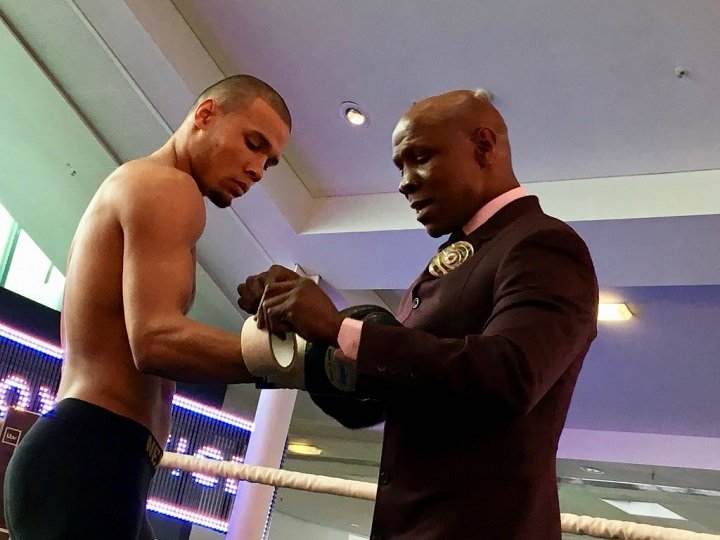 Long since retired former British superstar Naseem Hamed made quite the memorable pundit as a guest commentator on ITV Box Office this past Saturday night. Working the George Groves-Chris Eubank Junior WBSS semifinal, Hamed, as overweight as we have grown accustomed to seeing him these days, really did put the boot in in brutally assessing points loser Eubank Jr.

“The Prince” did not mince his words, telling the watching TV audience how Eubank should retire so as not to “hurt himself.” Hamed stated also how “you’re either good at boxing or you’re not.” Hamed made his feelings on Eubank as clear as possible on this matter. Some fans were shocked at the stiff criticism Hamed had for his countryman, yet those fight fans who remember Hamed from his glory years were not so taken aback at what he had to say about Eubank.

Ever since back in the early 1990s, Hamed and Eubank Senior have shared a healthy dislike for one another. Eubank, already a champion and a star, was insulted by Hamed’s claims that the middleweight had actually copied him; taking from the then unknown youngster his ring bravado, his flashy approach and even his famous ring entrance (Eubank not being able to master the head-first vault over the ropes Hamed would make legendary in the mid-1990s; instead merely jumping over the top rope).

Hamed went further, even appearing in a two page spread in a paper, himself surrounded by a number of almost nude models. “Eubank,” Hamed declared, “is too ugly to be able to do this.” Hamed, by now an even bigger star than the WBO champ, had insulted Eubank, severely.

To this day the mutual lack of respect endures; hence Hamed’s verbal hammering of Junior on Saturday. Was Hamed guilty of showing a distinct lack of class, or were his harsh words harsh but also fair? We will see in time if Eubank Jr has what it takes to be able to get back to top level.

For the purpose of a fun debate and nothing more, who, let us ask, was the overall better, more accomplished fighter – Eubank or Hamed?

Both were proven world championship calibre fighters, both won a couple of legit world title belts and both men showed flash, dash and the ability to score a great KO in a big fight. Neither man was ever knocked out in return (Eubank being stopped on an eye injury, but even this came right at the end of his career, and up at cruiserweight at that) and both men made a global impact.

LIVE on DAZN: Julio Cesar Chavez Sr and Chavez Jr Both In Action This Saturday

Hamed went out a winner but lost the biggest fight of his career, against Marco Antonio Barrera. Eubank lost quite a few towards the end yet he gained new admirers for the manner in which he pushed new star Joe Calzaghe and also rumbled with big cruiser Carl Thompson.

Hamed has the tidier pro ledger, he was the bigger puncher of the two and he made more money. Still, from this corner Eubank was “Simply The Best” when it comes to this (fun) debate.