A late report on a near-upset from Saturday night (March 6) in Miami, Florida.

Up at heavyweight, Russian veteran, former world title challenger Alexander Ustinov was held to a controversial draw after six tough rounds with a motivated Terrell Jamal Woods. 44-year-old Ustinov started the fight well yet faded, and held a great deal, over the second half of the pretty entertaining six-rounder.

Woods decked Ustinov in the third, while Ustinov had a point taken away from him for repeated holding in round five. Woods had plenty left in the tank in the final session, a round he definitely won. Ustinov, now 36-4-1(27) was very fortunate not to have been handed a loss.

Woods, a whole lot younger than Ustinov at age 31, is now a deceptive 24-47-9(17). It’s fair to say Woods of Forrest City, Arkansas has never been given any favours from the judges over the years – those nine draws, for example, could quite easily have been wins for the man dubbed “Knockout.”

Giant Ustinov, who had won his last two, these wins coming after his stoppage loss to Joe Joyce, pumped out his left jab quite well and he threw some big right hands at Woods. 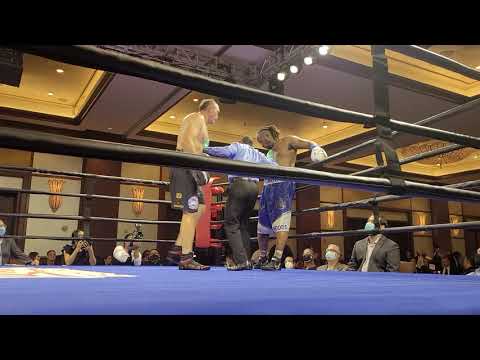 Woods was never hurt, though, instead taunting Ustinov. Ustinov’s holding, as in blatantly leaning on his man, was pretty bad. Based on Saturday’s performance it’s not clear how much Ustinov has left but it doesn’t appear to be too much.

As for Woods – who has been a hard working pro for almost ten years, having been in with the likes of, Adam Kownacki, Taishan Ding, Trevor Bryan, Zhilei Zhang, Robert Alfonso, Emanuel Nwodo, Kevin Johnson, Eric Molina, Michael Hunter, Michael Coffie, Dominick Guinn and Nagy Aguilera – he fully believes he won the fight and he wants a rematch with Ustinov.

“Yes, it was scored a draw but I truly won the fight,” Woods said to ESB. “I knocked him down in the third round, he lost a point for holding in the fifth round, and I clearly had the sixth round. He was holding through rounds three to six, all night! I would love a rematch.”

Whether Woods gets a return chance is another thing entirely. As bad as Woods made Ustinov look, It does seem unlikely. Woods has been a most active heavyweight as of late, with six fights in 2019, three fights last year and two fights so far this year. If Woods was a bigger name, plenty of people would have been screaming loud about Saturday night’s “draw.”