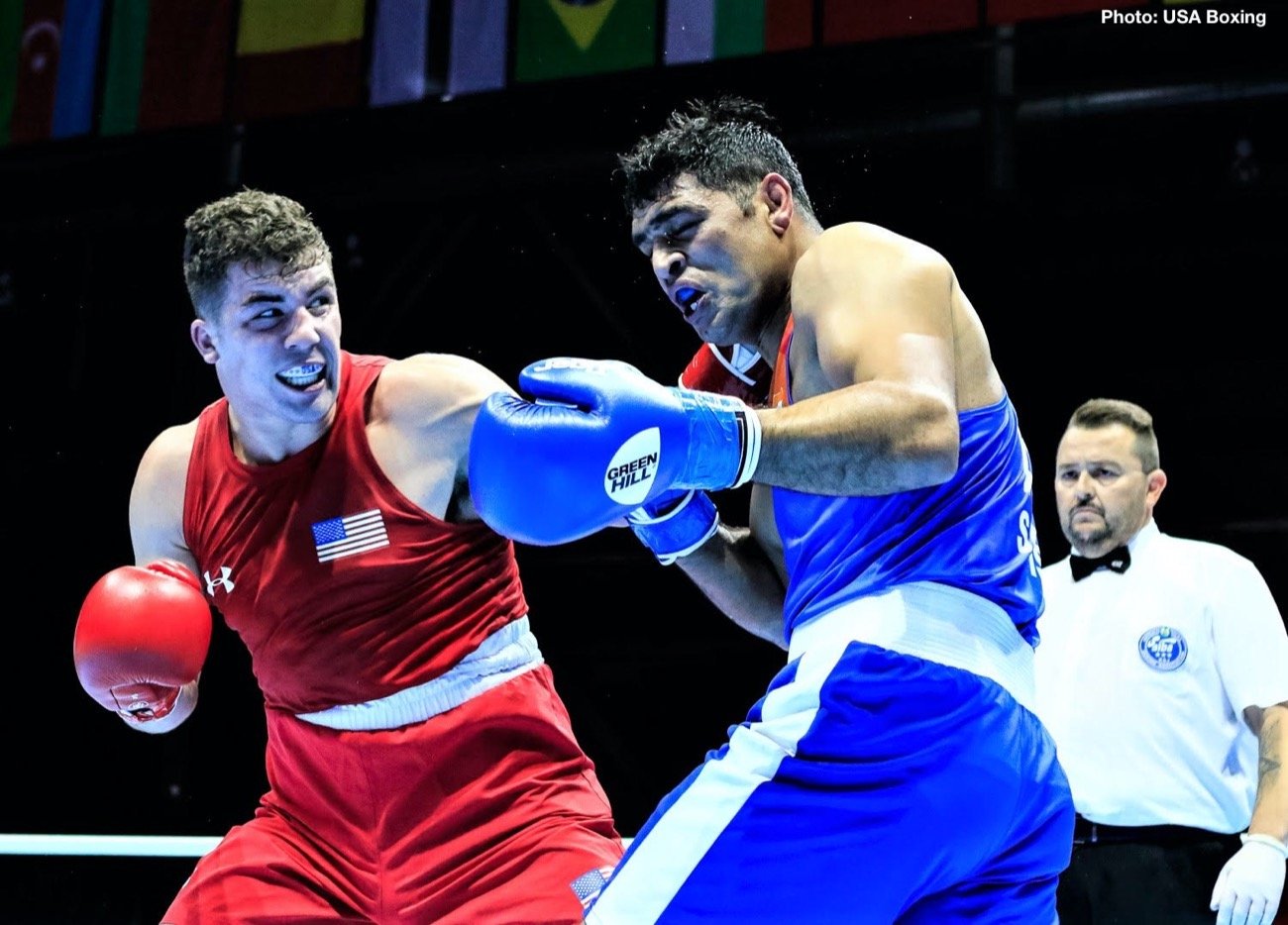 Earlier this year, ten-time National Champion Richard Torrez Jr. became one of thirteen male boxers to represent Team USA. The twenty-one-year-old southpaw amateur standout from Tulare, California is ranked number one in the United States and number three in the world in the super heavyweight division (201 pounds and above). Torrez has been on the USA Boxing Team for the last four years, has not lost a fight in the United States in the last seven years, and has amassed a stellar 151-10 amateur record.

Torrez was gracious enough to take time out of his busy training schedule to discuss with me his Olympic journey, his biggest accomplishment, the impact his father has on his boxing career and life, his thoughts ongoing professional, his controversial fight against Bakhoditr Jalolov, and much more.

James Stillerman: What was it like to qualify for the upcoming Olympics?

Richard Torrez: I qualified for the United States Boxing Team, which has been decided, however, we as a team must go internationally and qualify for the Olympics. We were about to head out for a qualifying tournament in March in Argentina, but it got canceled a week before we went due to COVID-19. That tournament has been rescheduled for next March in Argentina.

James Stillerman: So, what do you need to do to qualify for the Olympics?

Richard Torrez: For my division, I need to place in the top three in that tournament which will take place in Argentina. If that does not happen, then there is one more qualifier that was going to take place in Paris, France, but I am not sure where it will take place now, where I will need to win, in order to qualify for the Olympics.

James Stillerman: How difficult has it been to train for the last three years after graduating high school with the goal of making the Olympic Team, while missing a lot of fun activities and hanging out with friends?

Richard Torrez: I have missed a lot of things over the last couple of years like my prom and having a social life in high school, but I have always grown up with this mindset that in order to be great, you need to make a lot of sacrifices, and if you are ok with making sacrifices, then you will be ok with being great. I have found other ways to have fun like going for hikes and hanging out with my puppy. I have also traveled to eleven countries as an elite boxer which people who are going to parties would not be able to do.

James Stillerman: With the Olympics being pushed back until next year, how does it impact your preparation?

Richard Torrez: The main thing that changes is our intensity. When we were months away from the Olympics, we were practicing three to four times a day. Now, we are practicing twice a day and are not killing ourselves as much as we were before. We are now more focused on becoming a better boxer by working on our stances, techniques, having our hands up, footwork, and defense, as opposed to conditioning.

James Stillerman: Since the Olympic Team Buildings are close, where are you training?

Richard Torrez: Our boxing team is in a hotel in Colorado Springs, Colorado and they have a room set up for us with bags and strengthen and conditioning equipment and then we do our sparring and other boxing exercises outside since the governor [Jared Polis] passed a law which said that we need to have a mask on when we are training inside, which makes it difficult to do when you are sparring.

James Stillerman: You have accomplished a lot as an amateur boxer and won a lot of tournaments, but what has been your proudest moment or greatest accomplishment and why?

Richard Torrez: I have not had an opportunity to look back and reflect on my career and determine what my greatest accomplishment is because everything is in front of me. I am always focused on the future and what I can achieve this year.

James Stillerman: After the Olympics, will you go professional or will you continue to fight in the amateurs?

Richard Torrez: My goal since I was four years old was to become an Olympic world champion. That is what my dad instilled in me as an amateur boxer. After the Olympics, I plan on going pro in 2021. If I do not win a medal or the Olympics do not happen, then I will be at a crossroads and I will have to think about what I want to do next.

James Stillerman: When you go pro, would you still compete at the heavyweight division, even though you are smaller in size at 220 pounds?

Richard Torrez: I have talked with my dad a lot about this and I know that I am not that biggest heavyweight, but he has said if it is not broken, why fix it. My goal right now is the Olympics and to win a medal and once I go pro, then I will figure out my goals as a professional fighter. As a pro, I just want to be the best fighter out there.

James Stillerman: I know you want to go to college and major in engineering, so how does that fit in with your plans for the future?

Richard Torrez: I will go to college once I turn pro. I will be able to settle down a bit more because I will not have to travel as much, which will give me more time to take classes. I plan on taking general education classes in the beginning and then take classes in my major over time. I am lucky that I have friends and people back home that can help me out with my education. It will be difficult, but I will make it work.

James Stillerman: What is your take on your fight against professional boxer Bakhoditr Jalolov?

Richard Torrez: After I got knocked out, I went online and I saw all these articles, such as Yahoo, saying it was a mismatch and the fight should not have happened, but give me some credit. I know he was a pro fighter, but I am Richard Torrez. I have fought over 160 amateur bouts. I am trying to be the best in the world, so I want to fight the best. I should have been in the ring. He hit me with a good shot. I want a rematch. I was not victimized nor was it an unfair fight. I knew what I was getting into. I knew he was a bigger fighter, who fought professionally, but I still wanted the fight and I would do it all over again hundred times.

James Stillerman: What is like to have a father, who was a big-time boxer?

Richard Torrez: It is great. I can trust what he says to me because he was a big-time fighter himself, so I know what he is talking about. A lot of dads are their kids’ baseball or soccer coaches, yet they do not have anything to back it up in those sports, but my dad does. He was a standout amateur fighter [who had a 226-34-4 amateur record and was a member of the United States National Team in the 1980s], who was number one in his division for several years and was two fights away [loss in the semifinals] from qualifying for the 1984 Olympics Boxing Team, so I know that he knows what he is talking about. It is nice in that sense, but no one likes going home with the coach. Growing up, I had battles with him, yet nowadays, I truly appreciate everything that he has done for me.

James Stillerman: Who has had the biggest impact on your life and why?

Richard Torrez: My dad. Growing up, I spent at least two hours with him every day of my life in the gym since I was four. We have grown close over the years, but we also had our differences, but he has shown me the correct way to be a good boxer and more importantly, a good person. He has shown me what you do inside the ring, you have to show that outside the ring, and you always have to be humble. The lessons he has taught me in boxing are transferable to life.

James Stillerman: How did you manage to box, play football, basketball, track and field, do chess club, and be the valedictorian of your class at Mission Oak High School?

Richard Torrez: I gave up my social life. I would get up at 6 a.m. and go for a run, eat, and shower. Then I would go to school, take two AP classes, go to chess club during lunch, more classes, participate in my after school sport, run to boxing, and then do homework. I would wake up and repeat. I am very good at sticking to a schedule. I like the routine. Sometimes it gets boring, but it works.

James Stillerman: What positions did you play in each sport?

Richard Torrez: In football, I was the long snapper, middle linebacker, fullback, and I played on all the special teams, in basketball I was the center, and in track and field, I threw the shot put, discus, and ran the two-mile. I was also the president of the chess club.

For more information about Torrez, and the latest updates on his journey to the Olympics, friend him on Facebook @Richard Torrez, add him on Twitter @richardtorrez21, and on Instragram @theerichardtorrez.

Richard Torrez: I want to give a shout out to Macho Mike, who has been going through some struggles right now and was just diagnosed with cancer. I want to let him know that everyone here from Team USA is with him and wishes him a speedy recovery. 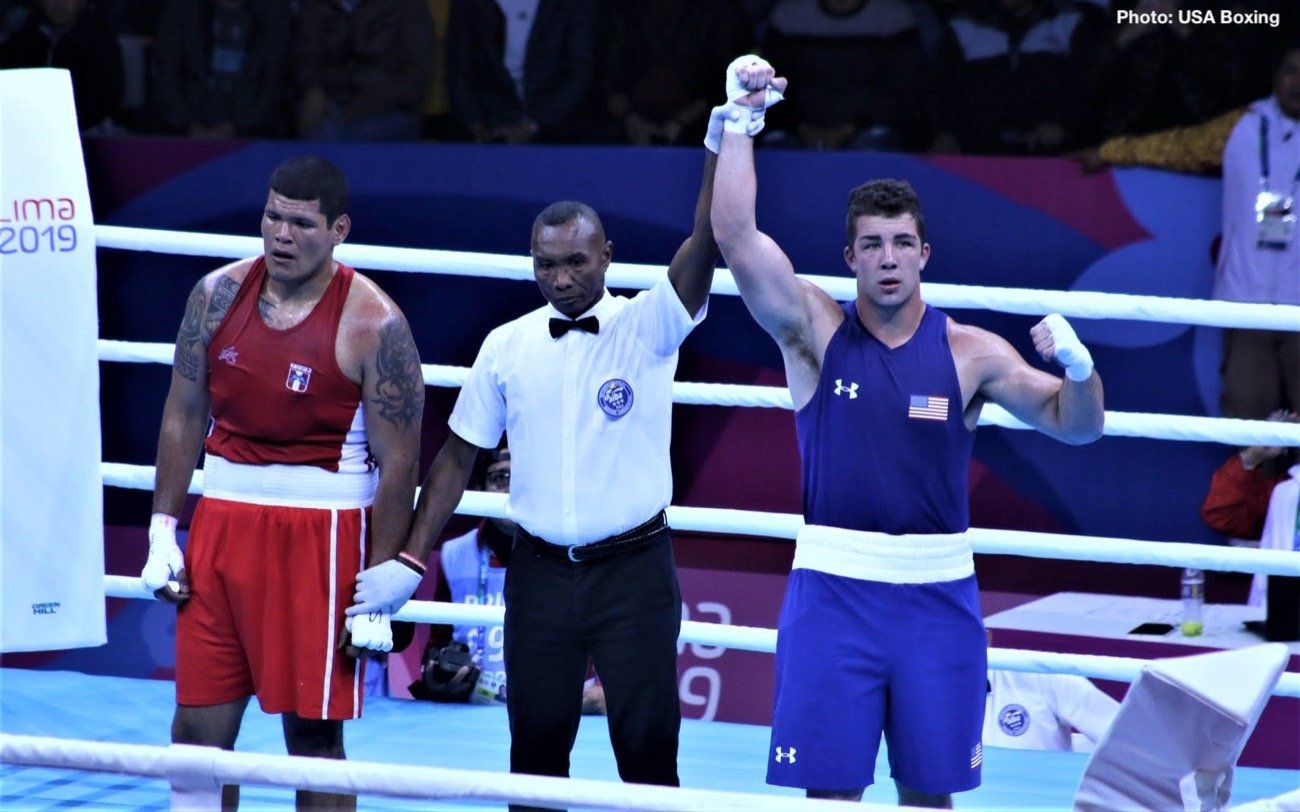