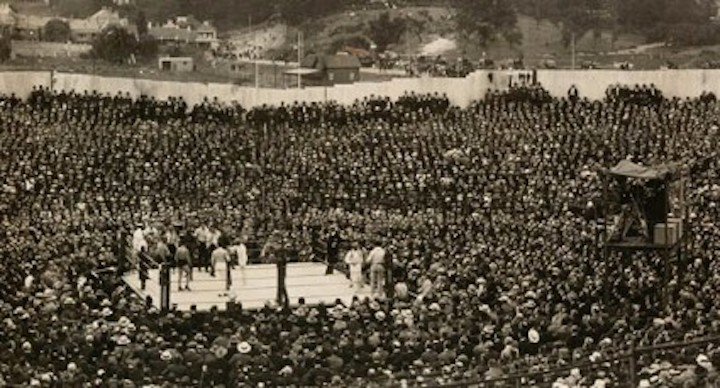 The great Harry Wills is best known for being the fighter the also great Jack Dempsey “ducked.” It wasn’t really Dempsey, but the racial tensions America was enduring at the time; the powers that be not in any way shape or form interested in letting another black fighter fight for the world heavyweight title after the carnage that followed the controversial Jack Johnson’s reign.

Wills may or may not have beaten Dempsey, we will never know. But quite a lot is known about Wills. And what a truly incredible individual he really was; both in the ring and out of it. Wills is looked at by many boxing historians as the single finest heavyweight never to have been given a shot at the title (Wills had to make do with being something called The World Colored Heavyweight Champion) and wins over the also superb Sam Langford, Sam McVey, Kid Norfolk, Fred Fulton and Gunboat Smith show how good Wills was.

But his great fighting ability and record (70-9-3(56) aside, Wills was an amazing person out of the ring. By accounts, Wills was a man with a strange ability to go without food, for a month-long period a couple of times a year, or so the story goes. Wills would fast, to the point where he would drop something like 60 pounds (he weighed around 220 of solid muscle in his fighting prime). It started, people think, in the early 1920s, at a time when Wills was a fighter in his early 30s. Wills apparently read a book about the enormous health benefits a fast could provide the human body with; it could even cure disease, the book said.

Not looking “for no publicity” from his month-long fasts, Wills’ odd habit was only revealed after his 1921 win over Kid Norfolk. Offered a fight with Jack Renault, Wills had to decline due to how he had begun his fast. The story was out but whether or not you chose to believe it was dependant on you either viewing Wills as “a good-natured eccentric,” or as “a hero to health cultists.”

According to a piece from BoxingNoir, Wills would usually suffer enormously on day-4 of his fast, what he called his “crisis day,” but that after that, it was plain sailing. And the effort was worth it, with Wills claiming he would “live to be 100,” and would be “fighting at age 50.” Wills is documented as stating how, as a result of his fasting, he never had the need to see a doctor, that his mind and body were “refreshed” and he felt like a million dollars.

According to the BoxingNoir article, Wills lost a staggering 1,820 pounds with his fasting, and in total he went an unbelievable two years and eight months of his life without food! Unbelievable? Who knows for sure, but the BN piece says Wills did indeed fast as he claimed, that it was “no publicity stunt.” And so the story goes – Wills, a big man, especially by 1920s standards, took nothing but water for 30 days straight, and he did it a number of times.

The great irony is the listed cause of death for Wills – diabetes. Wills was 69 years of age at the time of his death in 1958.

So did the fasting do any real good? Might Wills have died at a younger age had he not fasted as he did? It sure makes an interesting discussion, at the very least. They say making weight is the toughest part of being a fighter. Wills, a heavyweight, never had to worry about making weight; yet all the same, he saw to it that he dropped a good deal of pounds during his time.