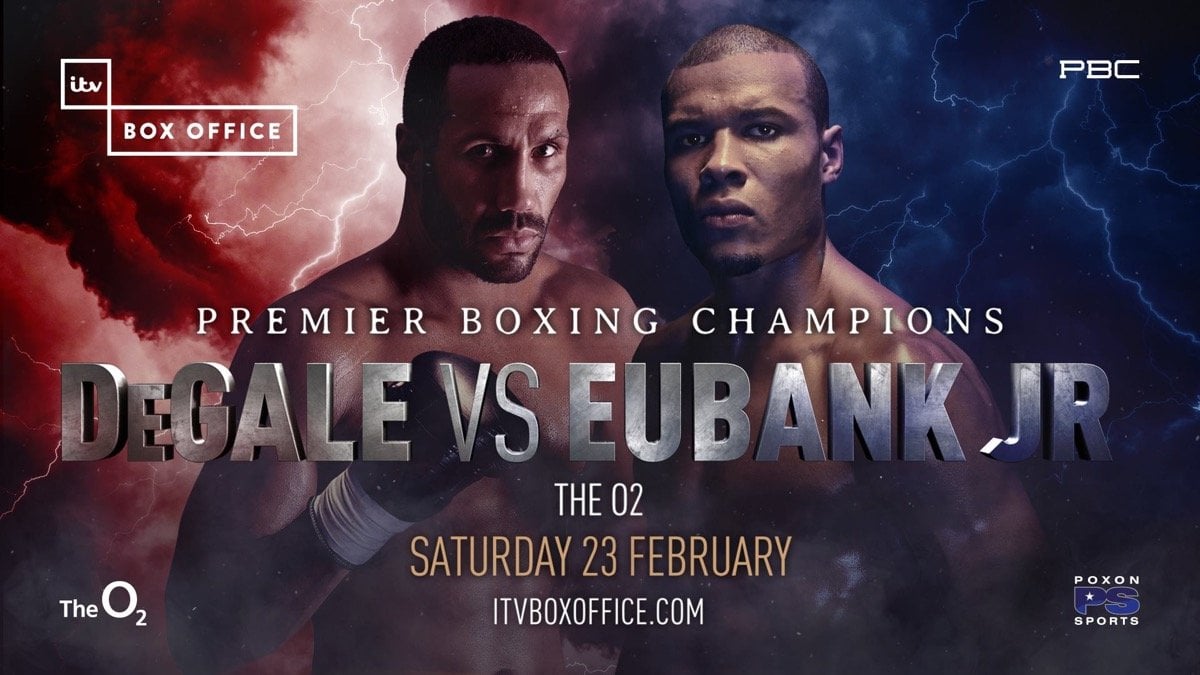 With the big-fight just under three weeks’ away, the bad blood is boiling up between the long-time enemies, who’s feud has stretched to nearly eight years, ahead of the ‘A Storm is Coming’ grudge fight promoted by Premier Boxing Champions (PBC) and Poxon Sports on Saturday 23rd February at The O2, exclusively live on ITV Box Office.

The fiery confrontation took place at a gritty converted former industrial factory in the backstreets of East London last week where DeGale and Eubank got up close-and-personal to film ITV Sports’ The Big Fight: DeGale vs Eubank Jr – Face to Face.

The special programme will broadcast on fight week and forms part of an unprecedented week of original programming content for ITV Sport, culminating in the big-fight on Saturday night.

DeGale and Eubank went face-to-face across a table with only ITV Sports’ man in the middle, the multi-award winning broadcaster Gabriel Clarke, who fired off hard-hitting questions to both fighters during a gripping and intense session that brought out the character, emotion and desire of both men ahead of their pivotal clash with everything on the line.

The 168 pound warrior have been priming their minds and bodies ready for the impending battle and with the clock ticking down towards their epic showdown, tensions were clearly running high and nearly boiled over as their escalating war of words and insults had two security guards poised to step in.

In one heated exchange DeGale ridiculed Brighton star Eubank Jr’s claims that he would outbox the more experience Olympic and Two-Time World Champion. DeGale stormed: “You think you can outbox me? I’ve won an Olympic Gold medal and world titles. You’re a joke.”

Eubank Jr. later ripped into DeGale and promised he would claim the rest his teeth, referring to the brutal world title unification fight between DeGale and Badou Jack in January 2017 when the Londoner’s two front teeth were punched out. Eubank mocked: “You’ve already had your two front teeth knocked out, I’m going to take the rest of them home with me.”

Even after Clarke had finished his questioning and filming had concluded, the pair continued to have an angry exchange and tellingly they bluntly refused to shake hands after Clarke looked for a sign of respect between them. DeGale coldly said, “I’m not shaking his hand until after the fight.”

For 31-year-old Summers, who hails from Tipton in the West Midlands, he has already come within touching distance of the British title after challenging for the title against then Champion Frank Buglioni in July 2017 at The O2.

He gave Buglioni a hard first title defence and took the Londoner into the trenches before losing on the scorecards in an action-packed fight. It certainly enhanced Summers’ reputation and he’ll now look to capitalise on that experience against Sterling.

He rebounded strongly after that night, displaying an array of skills, a combination of fast hands and powerful shots, to out box Gonzalo Romero and Tayar Mehmed to take his record to 15 wins from 16 fights.

Not only does Summers feel ready to get back into title contention, but he feels he is even better placed to do so than when he fought Buglioni.

“I bounced back in the right way after the Buglioni fight. I lost that night because of experience. Frank wasn’t a better fighter, but he had already boxed on the big stage. Now I have that experience of having already fought at The O2 to take into the ring with me this time. That’s going to be invaluable. I’ve been waiting for this opportunity to get back in the spotlight, and I’m going to take my chance this time. There’s a lot on the line: the loser has nowhere to go, while the winner has bigger things to plan for.

“I think Andre Sterling is a good fighter and I respect him. He’s accumulated a good record since turning pro. He’s a skilful boxer, but he’s heavy handed. It will be a good clash of styles. I’ll have far too much for him though. I’ve improved tremendously as a fighter. I think the size difference between us will be a factor too.”

28-year-old Andre Sterling’s career has been going places fast. In his last fight out in November 2018, the New Cross fighter was crowned Southern Area Light-Heavyweight Champion after outpointing the tough Kirk Garvey at The York Hall, Bethnal Green.

That career best win put Sterling forward for his British Title Eliminator opportunity and he knows a victory could land him a dream shot at the prized Lonsdale belt.
The former Fitzroy Lodge amateur is now unbeaten in nine fights with four finishing inside the distance since turning pro in April 2017.

This will be the first time Sterling steps out onto the biggest of stages at The O2, but he’s in a bullish mood and is ready to grasp his golden chance.

Sterling said: “This opportunity is massive for me and I’m grateful. I’m feeling good, happy with my close-knit team, and I’m having a superb training camp. My sparring sessions have been great, and my weight is just where I want it to be. This is the moment I’ve been waiting for and I’m ready. It’s going to elevate me to a new level. My future is very bright and there will be big fights ahead for the British public to savour.

“Ricky is a good fighter, there’s no doubt about it, but I’ll have too much for him. There’s no way he’ll keep up. I’ll show no mercy and you can tell Ricky that much. I hope he’s ready because I’ll be bringing huge fire power to the fight. That isn’t to say I won’t be vigilant about when I unleash the lion from the cage; you’ll see my boxing skill and pedigree on show. Just watch out.”

Both men have a great opportunity to step up in front of a huge crowd at The O2 and will put everything on the line to secure a victory that with will open doors and propel their careers to new heights.

The Big Fight: DeGale vs Eubank Jr – Face to Face certainly promises to be compelling and gripping viewing for the watching audience on ITV ahead of the eagerly anticipated DeGale v Eubank mega-fight when it premieres on Thursday 21st February at 2345.