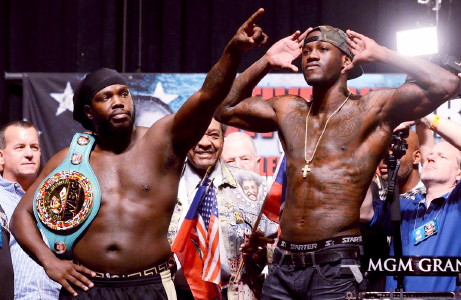 (Photo credit: Naoki Fakuda) Tonight’s fight between WBC heavyweight champion Bermane Stiverne (24-1-1, 21 KOs) and his hard-hitting challenger Deontay Wilder (32-0, 32 KOs) will be a short one, according to Stiverne. The 36-year-old Stiverne expects to get the inexperienced Wilder out of there by the 6th round by knocking him out in a painful fashion.

Stiverne notes that Deontay has positives in his game such as his power and height, but he feels that he’s not ready to step up so quickly at this juncture in his career.

“I think he’s [Wilder] a fraud. I don’t think he deserves to be fighting for the title and that’s why not with it,” Stiverne said via Fightnews.com. “But what is worse is that he is not even ready to fight at this level. I would be surprised if this fight goes more than 5 or 6 rounds.”

Stiverne goes on to say that he sees himself as the best. That obviously is a huge exaggeration on his part, because he’s clearly not the best in the division. Stiverne is a short 6’2” heavyweight who is pretty reliant on counter punching against guys that overcommit themselves. He’ll likely be at the mercy of a taller heavyweight who uses his jab and stays on the outside to pepper him all night without leaving themselves open for his left hand counter.

As long as the taller heavyweight didn’t throw too many right hands and didn’t let Stiverne get close enough to land anything, Stiverne would be at the mercy of the fighter. Wilder has the size to make Stiverne look very average, but he might not have the ring smarts to use his physical assets to shut down Stiverne’s game. Guys like Wladimir Klitschko, Tyson Fury and even Kubrat Pulev would be very difficult fights for Stiverne because they tend to stay on the outside and jab a lot.

For whatever reason, Wilder’s management never let him get a taste of what it’s like to face decent quality opposition, and now he’s being put in the position where he’ll need to learn on the fly against a good B-level heavyweight with a good punch.

Wilder has a chance in this fight if he can drop some of his big right hand bombs in the early going. That’s pretty much his only chance of winning. He doesn’t appear to have the training yet in how to control a fight from the outside with his jab, and he doesn’t even really have a jab to speak of. It would be asking a lot of him to suddenly show that he can control a fight with his size instead of his right hand, and I don’t expect that he will.