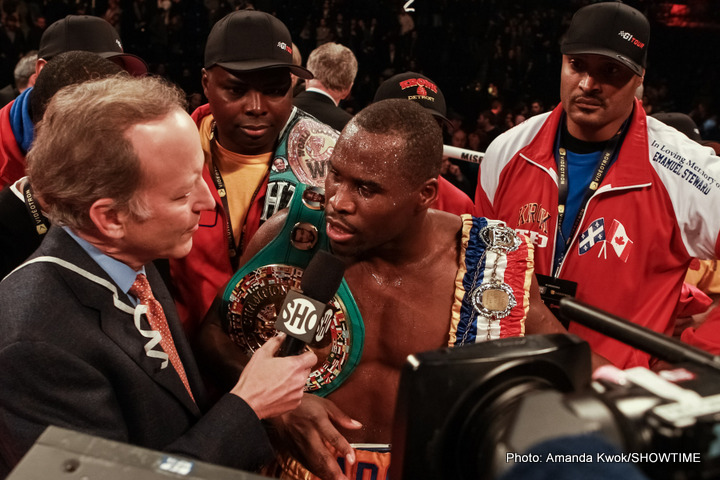 In an embarrassingly one-sided fight, WBC 175 pound champion Adonis Stevenson (25-1, 21 KOs) annihilated #7 WBC Dmitry Sukhotsky (22-3, 16 KOs) by a 5th round knockout tonight at the Colisee de Quebec, Quebec City, Quebec, Canada. If the idea was to pick out an opponent that was no threat to him, Stevenson did a good job with Sukhotsky because this guy did very little in the fight on offense in this one-sided affair.

Stevenson hurt Sukhotsky with a straight left to the head that put him down on the canvas. Stevenson would then knock Sukhotsky down twice more in the round with left hands before the fight was halted at 2:42 of the round.

“He [Sergey Kovalev] has com come to me. I’m the Ring champion, so he has to come to me,” Stevenson said.

Sergey Kovalev will be fighting Jean Pascal on March 14th. The winner of that fight will be the mandatory challenger to Stevenson’s WBC title. The World Boxing Council set it up to where Stevenson will be forced to fight Kovalev next year whether he likes it or not. It would be a welcome change to see Stevenson fighting someone good instead of the fodder he’s been facing.

In other action on the card, super middleweight Andre Dirrell (24-1, 16 KOs) had to survive being hurt by a big shot in the 12th round to stay on his feet to win a 12 round unanimous decision over Dereck Edwards (27-4-1, 14 KOs) in their IBF super middleweight eliminator bout. Dirrell is now the No.2 mandatory challenger for the IBF belt. James DeGale is the current IBF mandatory.

It’s quite likely that Dirrell and DeGale will wind up facing each other in 2015 for the IBF title if the current IBF champion Carl Froch vacates or is stripped of the title for failing to face DeGale.

Other action on tonight’s Showtime card: