Juan Francisco Estrada (44-3, 28 KOs) won a 12 round majority decision over Roman ‘Chocolatito’ Gonzalez (51-4, 41 KOs) in their trilogy bout on Saturday night to retain his WBC super flyweight and Ring Magazine titles at the Desert Diamond Arena in Glendale, Arizona

Chocolatito made a mistake in starting slowly in the first four rounds, giving away most, if not all, of them by not fighting aggressively against the 32-year-old Estrada.

When Chocolatito finally did begin putting pressure on Estrada starting in round five, he was in a bad hole and unable to catch up to him despite getting the better of the action in the second half. 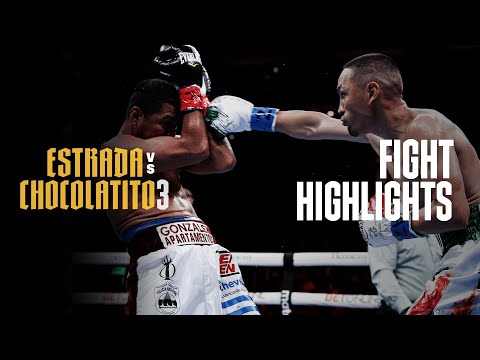 Knowing that he had an insurmountable lead, Estrada ran around the ring in the 12th, avoiding Chocolatito and ensuring he didn’t get caught with anything.

Overall, it was a boring fight compared to the first two Estrada-Chocolatito contests in 2012 & 2021.

Estrada, 32, avoided trading shots with the more offensive-oriented Chocolatito by using movement for the full 12 rounds.

The fight wasn’t entertaining compared to the first two matches between the fighters, thanks to Estrada’s movement, but at least we got a non-controversial outcome this time. In their previous fight, Estrada was given a 12 round decision over Chocolatito last year in a match he appeared to lose.

If this is the final fight between Estrada and Chocolatito, it’s a downer because it wasn’t a great fight unless you like watching movement instead of action.

The 35-year-old former four-division world champion Chocolatito didn’t fight with the same intensity as he had in the first two matches. Estrada was running from Roman, fighting a lot like the co-feature fighter Samuel Carmona with all the movement.

Promoter Eddie Hearn talked about a fourth Estrada vs. Chocolatito fight this week. It’s a waste of time. Unless the fight is staged in Chocolatito’s home country of Nicaragua, Honduras, or Costa Rica, it’s unlikely he’ll ever win another decision over Estrada in the U.S.

Carmona was giving Martinez a boxing lesson through the first five rounds, but he appeared to hurt his right hand in the sixth. From that point on, Carmona ran around the ring, playing it safe by choosing not to engage with Martinez. The crowd hated it, booing the lack of action.