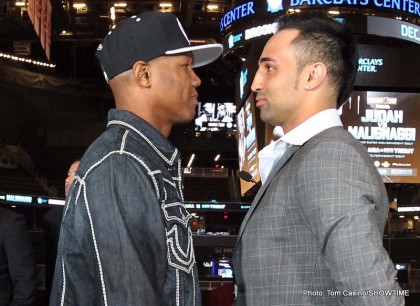 ATLANTIC CITY, N.J. (Oct. 26, 2013) – To celebrate one of the strongest years of programming in boxing history, SHOWTIME Sports® and Golden Boy Promotions will deliver back-to-back blockbuster events airing live on SHOWTIME on Saturday, Dec. 7 and Saturday, Dec. 14. Both events will be quadrupleheaders featuring six world championship fights including the most exciting and dynamic champions and challengers in the welterweight, super welterweight and super bantamweight divisions.

Throughout this past year, month after month, week after week, SHOWTIME and Golden Boy Promotions have featured the sport’s biggest stars in the most significant and meaningful fights in every relevant division in boxing. They joined forces to produce the most lucrative pay-per-view event in television history with perennial pound-for-pound superstar Floyd “Money” Mayweather,grew the average audience for live boxing on SHOWTIME by more than 30 percent from 2012, and attracted record crowds at sold-out arenas from coast to coast.

Then, on Dec. 14 at the Alamodome in San Antonio, the super-talented WBA Welterweight World Champion Adrien “The Problem” Broner (27-0, 22 KO’s), of Cincinnati, will make the first defense of his title when he meets the toughest opponent of his career, the dangerous, hard-hitting Marcos “El Chino” Maidana (34-3, 31 KO’s), of Santa Fe, Argentina in the main event.

A ratings goliath, Broner will be making his first start since capturing the 147-pound belt with a hard-fought 12-round split decision over defending champion Malignaggi. He made history when he became the fourth fighter to jump two weight classes and win a welterweight world championship, joining Hall of Famers Henry “Homicide Hank” Armstrong, Roberto “Mano de Piedra” Duran and future candidate “Sugar” Shane Mosley.

Maidana has won three fights in a row, including a smashing sixth-round technical knockout over Josesito Lopez in scintillating slugfest and Fight of the Year candidate last June 8 on SHOWTIME.