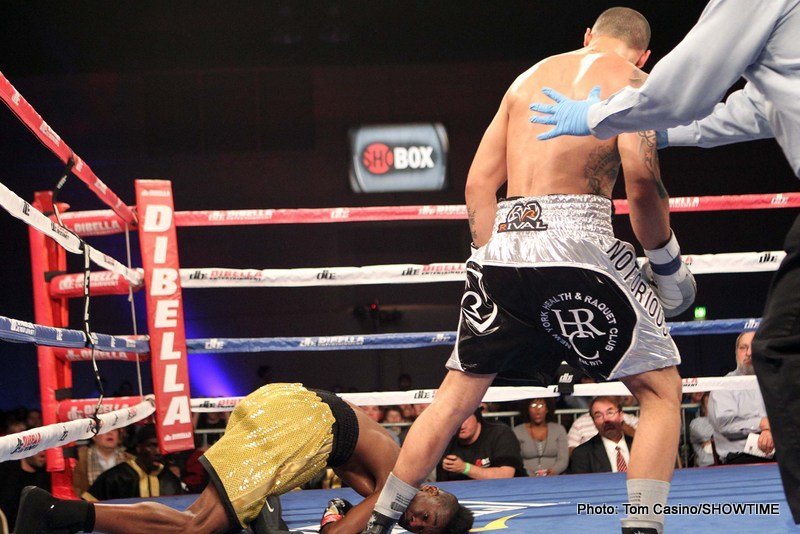 Promising, world-ranked southpaw Ivan Redkach (16-0, 13 KO’s), of Los Angeles, by way of Ukraine, passed the toughest challenge of his career, scoring one knockdown en route to a unanimous 10-round decision over Canada’s Tony Luis (17-2, 7 KO’s), but the night belonged to “The Brooklyn Rocky” Frank “Notorious” Galarza (12-0-2, 8 KO’s), of Brooklyn, N.Y., who registered an exciting second-round knockout over John “Apollo Kidd’’ Thompson (14-1, 5 KO’s), of Newark, N.J., Friday on ShoBox: The New Generation live on SHOWTIME® from Cook Convention Center.

In other ShoBox results on a four-fight card, Antoine Douglas (12-0, 7 KO’s), of Burke, Va., by way of Washington D.C., won a lopsided eight-round decision over Marquis Davis (8-1-2, 5 KO’s), of Tampa, Fla., in a matchup of unbeaten middleweights and undefeated junior welterweights Maurice “Mighty Mo” Hooker (12-0-2, 9 KO’s), of Dallas, Texas, and Abel Ramos (8-0-1, 4 KO’s), of Casa Grande, Ariz., by way of Gettysburg, Pa., boxed to an eight-round draw in an exciting scrap that opened the telecast.

“Redkach was legitimately tested for the first time and while he didn’t get the knockout, he showed the fans why he’s considered such an exciting fighter to watch. Galarza, who had limited credentials coming in, absolutely stole the show with a savage, stunning and sudden knockout.’’

Redkach dropped Luis late in the first round, but never could relax despite winning by the seemingly one-sided scores of 99-90, 97-92 and 97-93.

“I won the fight clearly,’’ said Redkach, the WBC’s No. 13-ranked contender. “I learned a lot. Tony is a true warrior. He made the fight a dirty fight and I got sucked into that game.

“I will take this as a lesson learned into my next training camp and improve on it.’’

Luis was livid with the scoring. “There’s always room for improvement and I didn’t fight the perfect fight, but I thought this was a much, much closer fight,’’ he said. “I felt I was hurting him, and he was getting tired. I felt I’d knocked him down in the first, but the referee didn’t call it even though his gloves hit the canvas. The ref was breaking us up too soon. He wouldn’t let me work.

“This is very disappointing to say the least.’’ 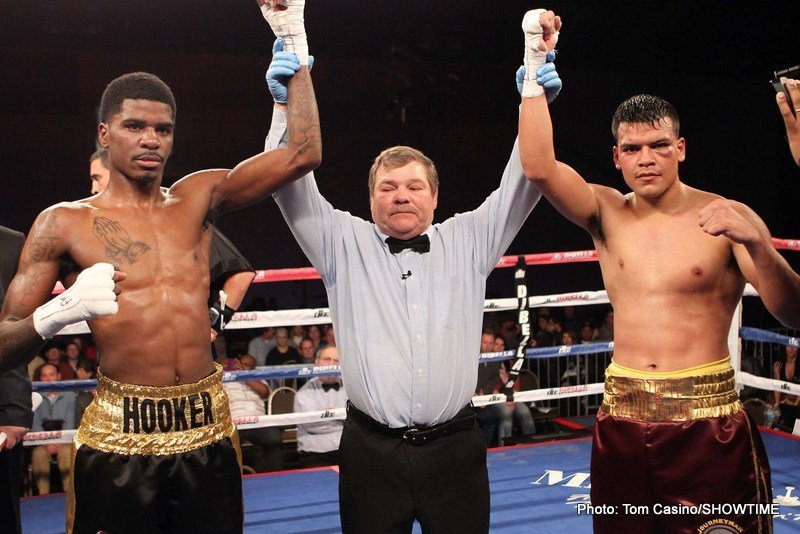 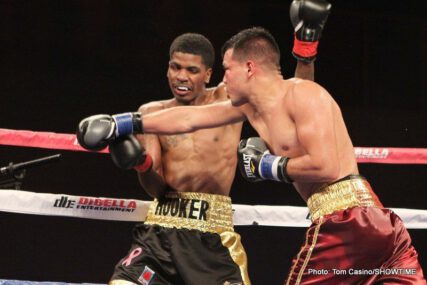 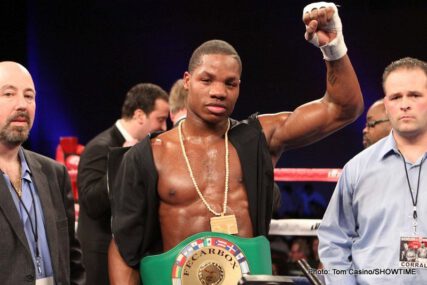 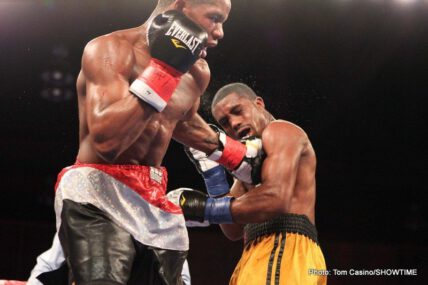 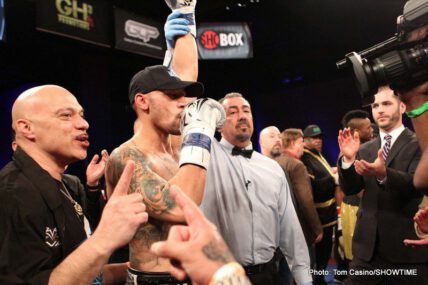 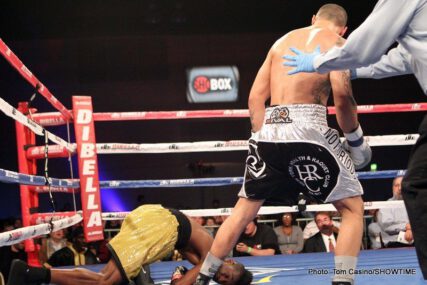 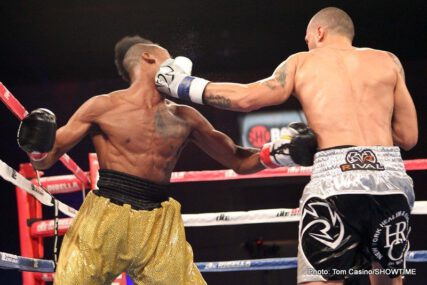 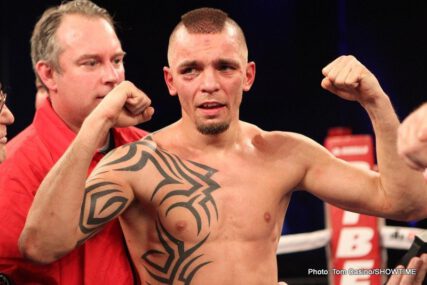 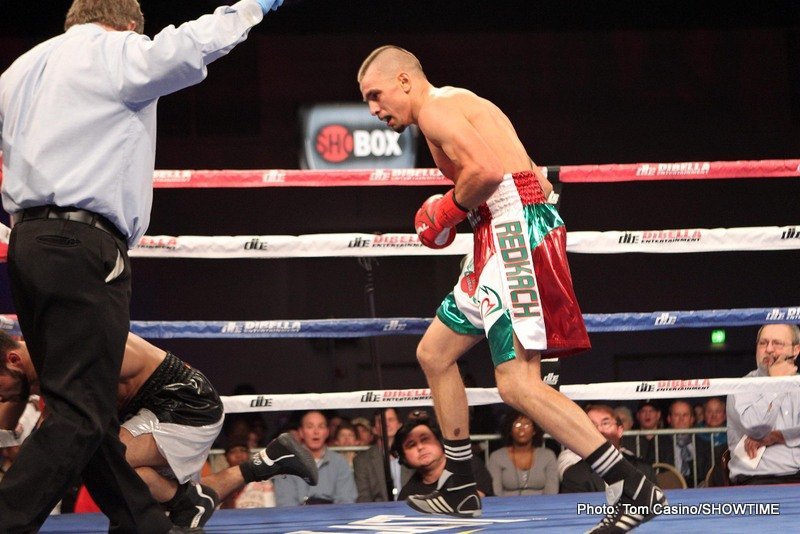 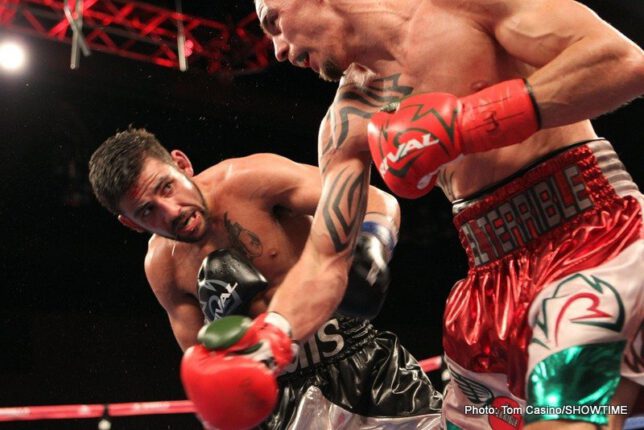 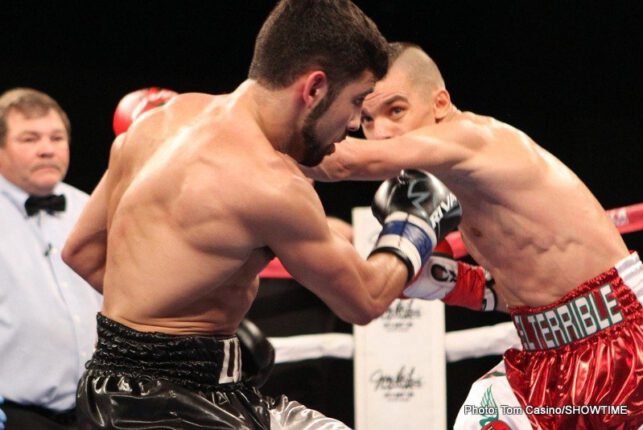 Galarza stopped Thompson with a devastating left hook at 0:16 in the second round. “This is the way to start the year,’’ a beaming Galarza said. “People are going to have to think twice about me now. What they saw tonight is who I am.

“Considering this was on a national stage, it has to be one of the very best wins in my career.’’

After starting slowly and losing the first round on all the scorecards, Galarza came out strongly in the second, threw a couple of right hands and then delivered the hook that sent Thompson crashing to the mat.

“Our game plan was to feel him out in the first and then step it up,’’ Galarza said. “The key was to get to him first, to not let him get off.’’

Douglas won by the scores of 80-72 twice and 79-73, but he wasn’t thrilled with his performance. “I am happy to get the win, but I’m not happy that the fight didn’t play out the way I thought it would. I expected more from myself; I expected to knock him out. I know I wasn’t 100 percent because I had a touch of the flu, so maybe I overestimated what I could do. Still, I expected more.”

To make matters worse for Davis, Douglas knocked out one of Davis’ teeth midway through the fight. To continue throwing punches – and perhaps save the tooth – Davis kicked it out of the ring without giving it a second thought.

The Hooker-Ramos was an excellent eight-round fight with give-and-take, two-way action from start to finish. In the end, one judge had it for Hooker, 77-75, but the other two scored it 76-76.

The event was promoted by DiBella Entertainment, in association with GH3 Promotions, Greg Cohen Promotions and Prize Fight Boxing.

The ShoBox quadrupleheader will re-air for first time this week as follows: