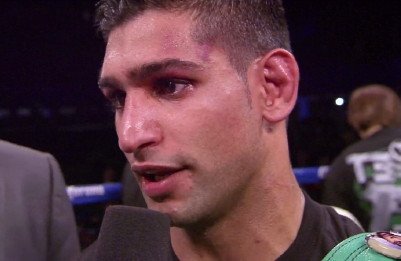 Golden Boy Promotions CEO Richard Schaefer is saying that he’s got an agreement from both Amir Khan and IBF welterweight champion Devon Alexander for a fight on December 7th in Dubai. Schaefer is still working out the details of the fight and he still needs to iron out the venue, but he’s got the hardest part out of the way in getting both guys to agree to the fight.

Schaefer’s grand plan is to have Khan fight Floyd Mayweather Jr. next year if he gets past Alexander. That’s a big if. Khan looks almost like he’s on his last legs in losing two out of his last four fights and barely beat Julio Diaz in his last fight.

That would have been three losses in Khan’s last four fights. I actually had Khan losing that fight but it shows you how vulnerable Khan is that he couldn’t even beat a fighter like Diaz without controversy.

Schaefer said to Sky Sports “I know Devon is on board, Amir is on board and we’re thinking December 7 for the fight. So now what we’re looking at is a possibility that the fight will be in Dubai if we can structure it in a way of that is enticing for Devon Alexander to go there.”

I’m not sure if Khan would keep more of his money because he might be able to escape the U.S taxes given that the fight is outside of the U.S. However, Alexander would still be taxed in a big way. The best thing Schaefer could do is to try and set up a fight between Alexander and Mayweather if Alexander beats Khan.