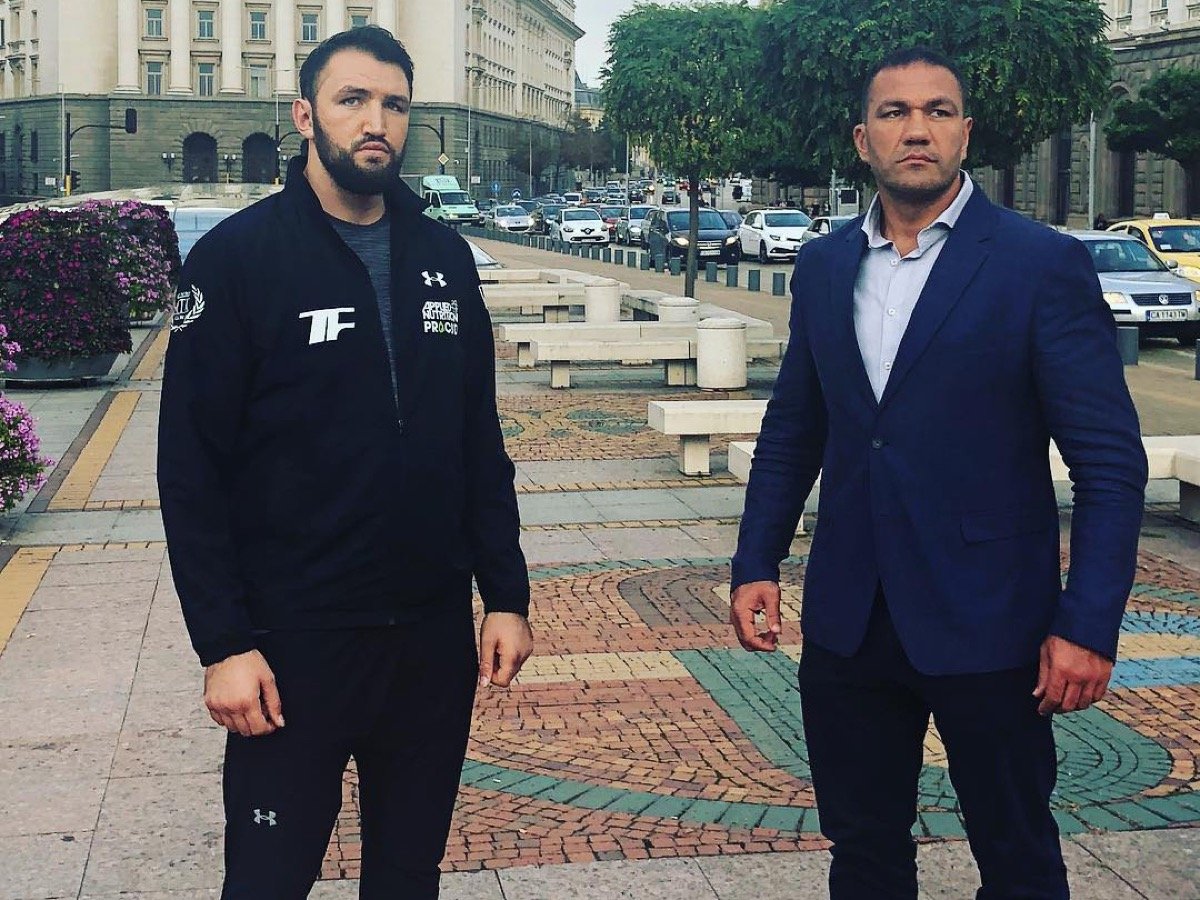 Trainer Peter Fury is relishing the prospect of unleashing his son Hughie on Kubrat Pulev when the pair collide in an IBF world heavyweight title final eliminator on October 27.

Hughie is bidding to earn a shot at IBF world champion Anthony Joshua by silencing Pulev’s fans in Sofia, Bulgaria and Peter Fury has reflected on a lengthy and fully-committed training camp.

Peter Fury said: “Pulev is technically very sound and you could argue that he’s the best technical boxer Hughie will have faced to this point but Hughie’s in fabulous shape.

“Hughie’s had a 13-week training camp and he’s ready for anything that Pulev brings. When you’ve had a 13-week camp, you’ve come to the end of the road. This is what camps are like.

“He had a slight graze across his eye about four weeks ago but that’s healed perfectly and is fine. He’s looking great.

“He did some sparring today and that’ll probably be the last spar now. It’s time for him to start resting up. He’s got a good 10 days to recover before fight night and get all that energy back.

“Now, it’s time for him to gain from what he’s achieved over the last three months.”

Britain’s IBF #5-rated heavyweight contender Hughie Fury is putting the final touches on a “torturous” training camp and, with his team, will arrive in Sofia, Bulgaria, this Saturday.

On Saturday, October 27, Fury (21-1, 11 KOs) will face Kubrat “The Cobra” Pulev (25-1, 13 KOs) in a 12-round elimination bout at the Arena Armeec in Pulev’s hometown of Sofia. The winner that night will become the first in line to face champion Anthony Joshua.

The event, entitled “Fire & Fury” will be presented by Ivaylo Gotzev and John Wirt’s Epic Sports and Entertainment, together with Fury’s promoter, Hennessey Sports, and will be broadcast live in the UK on Channel 5.

“I made a promise to beat Pulev in his own backyard and that’s what I’m going to do,” said a confident Fury. “Nobody else wanted this tough fight. That’s because they’re not future champions. I know what it takes and what you have to do to become the man. I don’t care if I fight Pulev in his own house. He’s in my way of what I want, and he’s got to go.”

Fury and father/trainer Peter Fury have been pushing it to the limit in their Manchester Gym, training twice a day, six days a week for up to three hours per session. But Fury, the current BBBofC British Heavyweight Champion, says all the work will soon be worth it.

“It will all be worth it when my hand is raised,” he continued. “There are no holes in my game right now. I’m at the top of my craft and once Pulev is eliminated, I’ll be coming for Anthony Joshua. He looked vulnerable in his last fight. I’m the one who will capitalize on those vulnerabilities!”

Despite his supreme confidence, defeating Pulev will be no easy feat for 24-year-old Fury. 37-year-old Pulev is one of the most popular athletes in all of Bulgaria, and a former two-time European and IBF International Heavyweight Champion. Pulev’s only career loss came in a challenge for the undisputed heavyweight championship against Wladimir Klitschko in 2014. Britain’s Dillian Whyte and Americans Jarell Miller and Dominic Breazeale all declined to face Pulev before Fury accepted.

“After I walk right into Pulev’s hometown and take him out, something no other heavyweight would even dare to try, everyone is going to be talking about me and Anthony Joshua. I can’t wait to get this job done and move on to the world championship.”

Trainer Peter Fury believes his son Hughie is capable of not only winning a world heavyweight title but unifying the division.

Hughie (21-1-KO11) heads for Bulgaria to take on Kubrat Pulev in an IBF final eliminator on October 27 with the winner advancing to a shot at WBA Super, WBO and IBF champion Anthony Joshua.

The 24-year-old has already challenged for a world title – suffering his sole career defeat with a controversial points decision to Joseph Parker at Manchester Arena in September 2017 – and Peter believes greatness beckons.

Peter Fury said: “I believe Hughie can unify the titles. He’s an exceptional talent and he’s getting better and better all the time.

“He’s already incredibly experienced by the age of 24. Anthony Joshua turned professional at 24 and Hughie has already been hard done by in a world title fight. He belongs on the world stage.

“Hughie turned professional at 18 and he’s already 21-1 with the loss a controversial defeat to a world champion. That’s a statement in itself. He’s an exceptional young man and I believe he’ll unify when he gets the chance.

“He isn’t a trash-talker. He doesn’t talk rubbish. He doesn’t have a bad bone in his body. All this stuff about hating other fighters is rubbish. He’s got respect for every human being. I’m proud of the way he conducts himself.

“I think if Hughie gets past Pulev then facing Joshua could happen next year. I don’t expect AJ to drop the IBF title or run from anybody.”

Marshall set for fourth pro-fight on Pulev vs. Fury card, live on free to air Channel 5 from 9pm GMT on Saturday, October 27th.

London, UK – Super-middleweight powerhouse Savannah Marshall will take on the determined, unbeaten Yanina Orozco in a 10 round intercontinental championship bout on the undercard of the ‘Fire & Fury’ event at the Arena Armeec in Sofia, Bulgaria on Saturday 27 October.

The 27-year-old Hartlepool native heads into the fight with a perfect 3-0 record and occupying seventh place in the women’s super-middleweight standings. Her Argentinian opponent also boasts an unbeaten record, although three places separate them in the division’s rankings with Orozco currently in 10th place.

With one unbeaten record sure to fall on the night, Savannah predicts a great fight for the fans. Speaking about her opponent Savannah said: “This is a great match up for me and for the travelling fans. Like me, my opponent is unbeaten so I’m excited to get out there, give it all I’ve got and get the win. There’s a lot at stake.

“I’ve been in camp now for 14 weeks which has felt like a long time. But I’m looking forward to finally getting in the ring and showing what I’ve learnt in that time. All the training will be worth it.”

Savannah trains alongside event headliner Hughie Fury at the Team Fury gym in Bolton under the watchful eye of Hughie’s father and trainer Peter Fury.

“Peter has so much knowledge and I enjoy the way he approaches training us,” said Savannah. “The way we train is all about learning, progressing and constantly moving forward, which has filled me with confidence going into this fight.”

In the main event of the evening, IBF #2-rated heavyweight contender Kubrat “The Cobra” Pulev will face Britain’s IBF #3-rated Hughie Fury in a 12-round final elimination bout at the Arena Armeec in Pulev’s hometown of Sofia, Bulgaria. The winner of this bout will become the mandatory challenger for Anthony Joshua’s IBF heavyweight title.

Women’s super-middleweight sensation Savannah Marshall will compete in her fourth professional bout on the undercard of the ‘Fire & Fury’ event at the Arena Armeec in Sofia, Bulgaria on Saturday 27 October.

Currently ranked seventh in the women’s world standings, Marshall will be looking to maintain her unbeaten record with a win against a yet to be named opponent.

The 27-year-old from Hartlepool, nicknamed ‘Silent Assassin’, started her professional career with a win over Sydney LeBlanc on the undercard of Floyd Mayweather vs. Conor McGregor in August 2017. Marshall has fought twice since then, securing knockout victories over Ester Konecna in May and Alejandra Ayala in June of this year.

“I’m really looking forward to getting back in the ring,” said Savannah. “We’re around five weeks away now from the fight and these last few weeks of training are going to be the hardest. I’m getting fitter and stronger each day and I’m excited about fighting again.”

She added: “I’ve had three fights and three wins so I’m looking to keep the momentum going and push forward. I also want to show that I’ve improved since those last three performances. It gives me confidence knowing how hard I’ve trained and I’m going to take that into the ring on October 27th.

Speaking about her potential opponent, Savannah said: “Of course it would help to know who my opponent is but at this stage of my career it isn’t crucial. I’ve only had three professional fights and I’m not on the world stage yet, so really, I’m just looking to improve as a boxer. I’m still in the early stages of my career and I’m concentrating on my own preparation.

Savannah trains alongside event headliner Hughie Fury at the Team Fury gym in Bolton under the watchful eye of Hughie’s father and trainer Peter Fury. She said:

“It’s been a great experience to train with Peter [Fury] and Hughie [Fury]. It’s been a different experience to when I was an amateur and part of the Team GB set up for eight years. I thought I’d seen everything at Team GB but some of the things Peter has us doing are really eye opening.”

She added: “I just want to be the best boxer I can possibly be. I would love to be a professional who walks away with something. A world title is the ultimate goal.”

Tickets for ‘Fire & Fury’ are now on sale via Eventim.bg. Fans in the UK will be able to watch the fight live on free to air Channel 5.