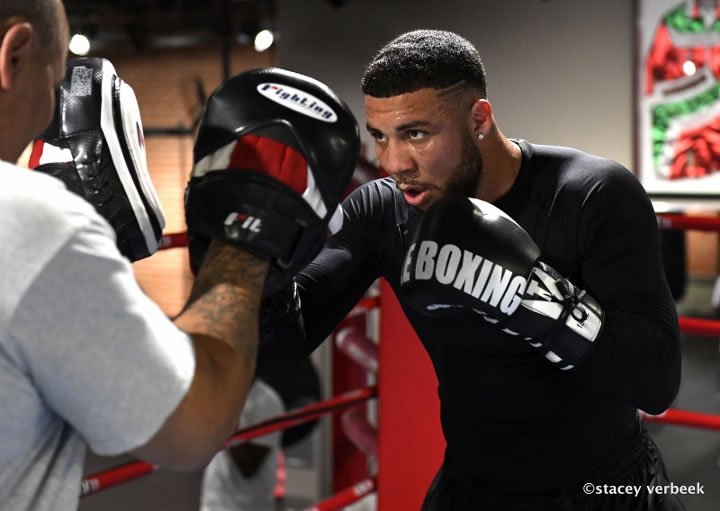 A laser-focused Samuel “Main Event” Clarkson (19-3, 11 KOs) will step onto the world stage on Friday, April 14, as the Uprising Promotions light heavyweight faces unbeaten prospect Dmitry Bivol (9-0, 7 KOs) for the Interim WBA World Championship. The bout will serve as the feature attraction of ShoBox: The Next Generation, with the fight taking place at MGM National Harbor in Oxon Hill, Md., just outside of Washington, D.C.

“Preparation for this fight has been awesome. I’m ready, and I’m excited,” said Clarkson, who moved his training camp to New York for this bout. “I will definitely owe this victory to New York City and of course Uprising Promotions, Ronson Frank and my dad. This was a very hard camp, but it has made me mentally become a stronger person. Physically, I’m definitely a stronger person. Going through life from this day forward, I’m just a different person.”

A Texas native, Clarkson and his father/head trainer, Samuel, Sr., opted to move this camp to New York where Uprising Promotions President Ronson Frank has been able to secure sparring with many of the top prospects in the region.

“Preparation in New York has been awesome,” Clarkson continued. “I’m not taking anything away from my people in Dallas, but I came out here and got exactly what I wanted. I stepped out of my comfort zone, and we’re ready for war now. All the hard work is just about done.”

Clarkson has gone unbeaten since joining Uprising Promotions and is currently riding a nine-bout winning streak. Among those victories included a decision over former world title challenger Cedric Agnew and knockouts of highly touted prospects Jerry Odom and Lavarn Harvell on ShoBox. The 26-year-old pugilist has been continually improving and showing significant growth since signing with Uprising Promotions in 2015, and a newfound dedication to his craft now leads him into the biggest opportunity of his professional career on April 14.

“Coming here and being out of our comfort zone has been great for two key reasons,” said Samuel Clarkson, Sr., who has worked alongside his son throughout his amateur and professional campaigns. “For one, this has enabled Samuel to fully prepare mentally. Two, the quality of sparring we have gotten has been tremendous. We have sparred with some top quality guys here in New York. Being embraced by all of these highly skilled fighters in New York has just made this whole thing a great experience. We’re really thankful to have this opportunity.”

Uprising Promotions President Ronson Frank, who initially started the promotion in 2013 to help himself get fights as an undefeated light heavyweight prospect, has aggressively build the foundation for his company over the past four years and feels very confident as its lead stablemate heads into this world title opportunity.

“Camp has been great, and everything has gone very smoothly,” said Frank. “We have a nice, strong game plan, and we have put in all of the preparation necessary to be ready for a fight like this. We are good to go and can’t wait until the fight.”

Standing opposite Clarkson on April 14 will be Bivol, who had an extensive amateur career that he finished off with a record of 285-15. The 26-year-old won the Interim WBA Light Heavyweight Title last May in Moscow with a unanimous decision over previously undefeated Felix Valera.

“We have some tricks up our sleeves,” Clarkson concluded. “Fans are definitely going to see an amazing fight. Anybody who knows me, you know I’m going for the knockout. If it shows up early, we’re taking it. If it’s later in the rounds, then that’s where we’ll take it. I’m just coming, and I’m going to be vicious. I’m always aggressive. I’m not afraid of this guy, so people are going to see a really exciting fight from bell to bell.”

Tickets for the event, which is co-promoted by Greg Cohen Promotions and Banner Promotions in association with World of Boxing and Uprising Promotions, are priced at $103, $73 and $48 and can be purchased at www.TicketMaster.com.

For more information on Uprising Promotions and to keep up with all of our latest news, keep it locked to UprisingPromotions.com and make sure to follow us on social media: @UprisingNYC

NOTE: In a matchup that was confirmed on Wednesday as the opening bout of the ShoBox telecast, Baltimore’s undefeated Glenn Dezurn (8-0, 6 KOs) will face unbeaten two-time national amateur champion Leroy Davila (5-0, 3 KOs), of New Brunswick, N.J., in an eight-round super bantamweight bout.

Tickets for the event, which is co-promoted by Greg Cohen Promotions and Banner Promotions in association with World of Boxing and Uprising Promotions, are priced at $103, $73 and $48 and can be purchased at www.TicketMaster.com.

“I upped intensity 1000 times for this camp,” said Clarkson. “I had better sparring, did more miles running and way more rounds doing bag work. Everything I’ve done has been intense and we added a lot more into it.”

Clarkson did half his training in his home state of Texas and the second half in Brooklyn, where he has sparred with some well-known names.

“I’ve been working with guys like Sean Monaghan and Joe Smith Jr. I’ve had over 110 rounds of sparring since coming to Brooklyn. I wanted to push my sparring to the max. I’m not saying there isn’t competition in Dallas, but I wanted different looks and to be out of my comfort zone. I got what I was looking for here.”

Clarkson says he can tell he’s in the shape of his life for this fight.

“I’m seeing new muscles,” said Clarkson, who has won nine straight fights. “The power was already there, but my speed is great now too. I will most definitely come in under weight. We’ve put a lot of focus on weight this time. The goal is to eat breakfast before weighing in. I have kept on a very strict diet – my dad cooks everything and we’re eating right.

Known for his aggressive style, Bivol (9-0, 7 KOs, 2-0 WSB) was a prominent amateur who is now determined to make his mark in one of boxing’s toughest weight classes. Clarkson (19-3, 12 KOs), of Cedar Hill, Texas, has won his last nine fights in a row and will make his third appearance on ShoBox.

In a co-featured matchup of undefeated welterweight prospects, former amateur standouts Juan Ruiz (18-0, 11 KOs) and Malik Hawkins (10-0, 7 KOs) will square off in an eight-round 147-pound bout.

In the telecast opener, Baltimore featherweight Glenn Dezurn (8-0, 6 KOs), who is trained by the renowned Barry Hunter, will take on an opponent to be named in an eight-round bout.

Tickets for the event, which is promoted by Greg Cohen Promotions and Banner Promotions in association with World of Boxing and Uprising Promotions, are priced at $103, $73 and $48 and can be purchased at Ticketmaster.com or by phone at 800.745.3000.

Bivol, who compiled an impressive amateur record of 285-15, is looking to break through in a division which features the likes of Adonis Stevenson, Andre Ward, Sergey Kovalev and Badou Jack. Last May in Moscow, the 26-year-old won the Interim WBA Light Heavyweight Title in only his seventh professional fight with a unanimous decision over previously undefeated Felix Valera.

Bivol has since won twice, both times on Russian soil, including a fourth-round knockout of Robert Berridge in defense of his interim belt.

“I am very glad that this will be my first fight televised in the U.S.,” said Bivol, who is fighting for the third time in America. “It’s great that this is main event because that motivates me. Clarkson is a good defensive fighter. He can be aggressive and I expect this to be a tough fight. I look forward to introducing myself to American fans with a great performance, and I plan to defend my title with an exciting victory.”

Clarkson has registered nine consecutive victories following a loss to the current unbeaten Jesse Hart (21-0). Clarkson moved up in weight to beat Cedric Agnew (27-1) in February 2015, and has ShoBox knockout wins over Jerry Odom (13-1) in July 2015 and Lavarn Harvell (15-1) in October 2015.

“This is a huge opportunity to prove my abilities to the world,” Clarkson said. “Bivol is a crafty fighter from Russia and had a very impressive amateur career, mostly at 165 pounds. He’s a good fighter and I definitely have to bring my A-game.

“I’m ready for the challenge because I do really well against European fighters. European fighters are slow and come forward a lot, and they’re not big on head movement. We are working hard and have a lot of guys in the gym who fight with a similar style. By fight time I’ll be ready for anything he has.

“I had to make up my mind if I wanted to be the lion or the lamb and, in the end, I decided I don’t like losing. I rededicated myself and now I can’t be stopped.”

The son of a former fighter, Ruiz is originally from Venezuela and fights out of Baja California, Mexico. He lost just eight times in 220 amateur fights, was a six-time Venezuela national champion and was part of the Venezuelan National Team. The undefeated Ruiz has won via knockout in seven of his last nine fights.

“This is a golden ticket for me to show what I’m capable of,” Ruiz said. “I will do my best to give the fans watching on TV and those attending the fight the best show possible.”

The 21-year-old Baltimore-resident Hawkins was 92-8 as an amateur and shares the same trainer – Calvin Ford – as stablemate and IBF Junior Lightweight Champion Gervonta Davis. Hawkins, who was the 2012 Bronze Medalist in the Junior Olympics, will face his toughest test to date in fellow undefeated Juan Ruiz.

“This is a huge chance for me to showcase my skills and show I belong among the best in the welterweight division,” Hawkins said. “There’s nothing he can bring I haven’t seen, and I plan on making him fight my fight.

“I get better when I fight talented fighters. To be honest, nobody I have fought so far has brought out the best in me, but I’m hoping that Ruiz does just that. A victory over him would put me in position to fight the opponents I need to fight to take that next step toward becoming a contender.”

The undefeated Dezurn, who was a three-sport star athlete in high school, was an amateur standout who compiled an 87-7 record in the unpaid ranks under the tutelage of Barry Hunter. The Baltimore native is married to female boxer and U.S. Olympic alternate Franchon Crews, who fought Claressa Shields in the amateurs and in her pro debut.