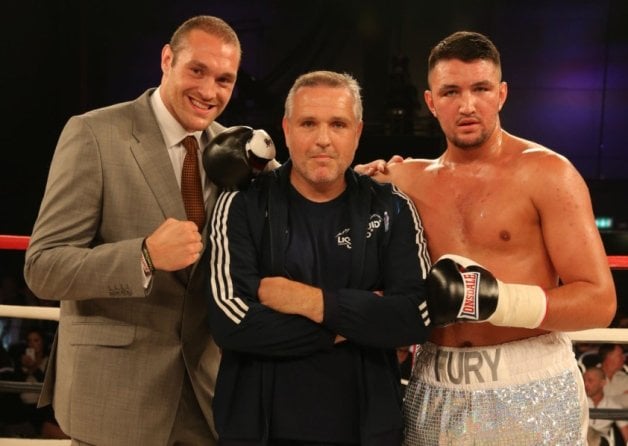 British Heavyweight Champion Sam Sexton is using the powers of hypnotherapy as he heads into his crunch showdown with Hughie Fury this Saturday (12th May) at the Macron Stadium, Premium Suite, Bolton, exclusively live on free-to-air Channel 5.

The Norwich star has been working with hypnotherapist Matthew Robinson from Boxnosis as he makes the first defence of the Lonsdale belt against a dangerous challenger in Fury, who’s having his first fight back since his controversial loss to Joseph Parker last September.

Sexton believes that mind over matter will take him to victory over big-hitting Fury and continue his winning run using the technique that has stretched his last nine fights.

“It’s nothing like you see in films with a swinging watch in front of your eyes and going into trance,” Said Fury.

“A lot of it involves focusing on key words, like power, strength, accuracy and making me believe that I’m more powerful and stronger that anyone else,”

“One day I might be tired coming into the gym from a hard session the day before and my mind is saying I’m too tired, but I can overcome that and put in a personal best session,”

“It’s about mental control and picking the information that I need to win the fight and not wasting my time on negative stuff in everyday life,”

“I’ve been through a lot in the last few years and sometimes my mind hasn’t been focused, but this has really helped me, It might not be for everyone but it works for me.”

“This is a massive fight for me against Fury, I’ve got my plans where I want to go, but I have to get past Fury first.”

Sexton v Fury is exclusively live on Channel 5 this Saturday from 9pm. Watch the undercard live on 5Spike from 7.30pm.

FURY ON ROAD BACK TO WORLD HEAVYWEIGHT TITLE SHOT – Hughie Fury is ready to punch his way back into world heavyweight title contention once he’s claimed the British Heavyweight crown.

Fury makes his long awaited return to the ring on Saturday 12th May at Bolton’s Macron Stadium, Premier Suite, when he challenges the reigning British Champion Sam Sexton for his title.

The fight will be broadcast exclusively live across the UK on Channel 5 – the first time in nearly seven years that a British Heavyweight title fight has been seen on terrestrial TV.

Manchester ace Fury is hungry to get back into the world heavyweight mix after his controversial points decision loss to WBO Champion Joseph Parker last September in his first world title challenge at just 23.

March is a busy month in the heavyweight division with WBC king Deontay Wilder’s thrilling win over Luis Ortiz last Saturday night and IBF/WBA Super Champion Anthony Joshua in a unifier against Parker at the end of the month, but Fury believes he can get himself into pole position, starting with a victory over Sexton.

“I’ve got the buzz back and I’m really excited to get back into the ring again.” Said Fury.

“The heavyweight division has really come alive and it’s the perfect time for me to get myself back into a great position to be challenging for a world title again in the not-to-distant-future, whether it’s against Wilder, Joshua or Parker,”

“Wilder had an entertaining fight against Ortiz and showed that he’s a dangerous man when he’s hurt to come back and knock out Ortiz like that. He showed that he’s not scared to face anyone and took the fight against Ortiz when nobody wanted to touch him. Fair play to Ortiz, though, he’s a tough man and showed plenty of heart and I’m sure he’ll be back,”

“With Joshua against Parker, I think that styles make fights and Carlos Takam gave Joshua plenty of problems last time out. Parker can’t stand still in front of him because Joshua can bang, he’s got to use plenty of movement and he could cause a massive upset.”

Fury has based himself in Bolton with father and trainer Peter as he prepares for the Sexton clash and is not underestimating the Norwich puncher who upset the odds to claim the Lonsdale belt against Gary Cornish last October.

He added, “Sexton wanted and called for the fight against me when no one else wanted it and I respect him for that. I’m under no illusions, this is going to be a hard fight and I know to get where I want to be and that’s challenging for a world title, I’ve got to beat him and take the British belt first. I’ve been locked away with my dad training hard and working on plenty of things and people will notice a major difference in me this time around.”

Hennessy Sports, Infinitum and Channel 5 are proud to announce that the prestigious British Heavyweight Championship* will return to terrestrial TV for the first time in nearly seven years when Champion Sam Sexton defends the title against Challenger Hughie Fury on Saturday 12th May at Bolton’s Macron Stadium, Premier Suite, exclusively live on Channel 5.

Promoter Mick Hennessy, returns to the network, to ensure that one of the most revered titles in British sport can once again be viewed by the nation for free.

Hughie himself is an alumni of Channel 5, where he commenced his professional career and learnt his trade from World Heavyweight Amateur Champion to World heavyweight title contender.

Now Hennessy returns with a mouthwatering domestic heavyweight clash that will headline an action-packed show which is set to whet the appetite of boxing fans and Channel 5 viewers as they battle it out for the Lord Lonsdale belt.

Sexton v Fury is the latest addition to an exciting line-up of free-to-air sports events in Channel 5’s extensive portfolio that currently includes Live Aviva Premiership Rugby matches (as well as a weekly highlights show), Live FIA Formula E, MotoGP and World Rally Championship highlights, weekly football highlights from across the EFL and the Carabao Cup, as well as international cricket highlights from all of the England Men’s and Women’s team’s home fixtures.

Hennessy said, “I’m delighted to bring the historic British Heavyweight Championship back to mainstream, free-to-air, television on Channel 5 where it will be seen by the biggest viewing audience possible due to their considerable reach and exposure. I can’t believe that it will be nearly seven years since the British Heavyweight title was last seen on free-to-air in the UK on Channel 5, which we also promoted. We’re back with a bang along with our partners Infinitum and thrilled to deliver a great fight for the fans between two proud and fierce warriors in Sam and Hughie and one that will make the whole country sit up and take notice. I’d like to thank Channel 5, Infinitum, Peter Fury and Graham Everett who were involved to make this happen and I can’t wait for May 12th.”

Caj Sohal, Head of Sport for Channel 5 said, “Live boxing is a key component of our sporting slate and we’re committed to delivering the most exciting bouts in the UK. We’re delighted to bring the British Heavyweight title to a wider audience and with two terrific heavyweight fighters stepping into the ring, this is a must-see fight for boxing fans.”

Sexton caused a massive upset when he travelled to Gary Cornish’s Edinburgh fortress last October and won on all three judges’ scorecards – despite a late onslaught from Cornish – to claim the vacant title and take it back home to Norwich.

Fearless Sexton now heads into Fury’s north-west hotbed to make the first defence of the title and is relishing the opportunity. He said, “I’m really excited to be boxing on a Mick Hennessy and Channel 5 show which is on free-to-air TV. It’s a great fight against a young world class opponent, but I believe I have the experience and ability to win and I won’t be at all phased going into Hughie’s homeland as I’ve proved in the past with Championship victories in Belfast, twice, and in Edinburgh.”

Sexton’s trainer Graham Everett, who’s developed four British Champions: Jon Thaxton, Liam Walsh, Ryan Walsh and Sexton, added, “There have been a number of offers for Sam, but this is the one he wanted. It’s a fantastic opportunity for Team Sexton and a great chance to boost our world ranking. We know that Hughie is a world class fighter and we want meaningful fights which is why Sam wanted to fight him.”

Fury heads straight back into title action in his first fight following his controversial points decision loss to WBO World Champion Joseph Parker last September and now aims to get back into world title contention.

At the age of just 23, Fury proved that he is a world class fighter and his best years are still ahead of him. The Manchester star is happy to get back into the ring again and aims to claim the British crown. He said, “I’m going to do what I always do and that’s perform to my best. I’m very excited to be back and facing Sexton for the British title and believe me I’m on a mission to claim back what should have been rightfully mine, the world title. I am the uncrowned world champion and come May 12 you will see why that is.”

Peter Fury, Hughie’s father and trainer, added, “We are delighted to be back in action on terrestrial TV in the UK on Channel 5 where Hughie has fought many times, challenging for the British title and delighted that it’s in Bolton. Hughie has proven he belongs on the world scene and what better way to have his comeback fight for the British title. Hughie has learned a lot from his controversial WBO World title fight and aims to be right back up there in good fights.”

Suzanne Speak, general manager of Bolton Whites Hotel, is thrilled to be hosting the big heavyweight showdown at the venue and said, “Bolton Whites is a unique and versatile venue and we are looking forward to staging the hugely anticipated contest between two renowned heavyweights.”