Ryan Garcia faces Javier Fortuna next Saturday night on DAZN in a Golden Boy card at the Crypto Arena in Los Angeles. The fight card begins at 8:00 p.m. ET live on DAZN.

The undefeated #2 WBC lightweight contender Ryan Garcia (22-0, 18 KOs) will be coming off a three-month layoff since his last fight against Emmanuel Tagoe in April.

It’s a quick turnaround for Ryan to be getting back in action this fast, but he didn’t take any damage against Tagoe.

It will be interesting to see how Ryan does against Fortuna because this is arguably the best or second-best fighter he’ll have faced in his career.

Fortuna has been around the sport a long time, and he’s got a lot of tricks up his sleeves that he can use to give Ryan problems, especially if he’s not for real like some think.

Ryan is picking an excellent time to fight the 33-year-old former WBA super featherweight champion Fortuna (37-3-1, 26 KOs), with him having lost to Joseph ‘Jojo Diaz last July and looking poor in that defeat.

However, the 23-year-old Ryan’s defense and chin are shaky, as we saw in him getting dropped hard by Luke Campbell in the second round of their fight last year.

Ryan looked like he lost consciousness for a split second while falling after getting tagged hard by a left hand from Campbell, and the British fighter isn’t known for having enormous punching power.

Fortuna arguably hits harder than the now-retired Campbell, and he could knock Ryan out if he can land enough shots.

It’s a strange move by Golden Boy Promotions to match Ryan Garcia up with Fortuna rather than Jojo Diaz, as that’s a fight that would make more sense.

If the idea is to increase Ryan’s popularity and show that he’s for real and not just a social media/YouTube boxer, he should be fighting Jojo Diaz or one of the top ten contenders at 135.

Fortuna returned from that defeat to stop the 39-year-old journeyman Rafael Hernandez (32-16-3, 25 KOs) by a first-round knockout last February, but that was a gimme fight designed for confidence-building.

It didn’t do anything to help boxing fans forge about how bad Fortuna looked in losing to Jojo Diaz last year.

The reality is that Fortuna is too small, too weak, and too old to be fighting Ryan Garcia at lightweight. This should be a slam dunk win for Ryan unless he gets caught with something.

“I think it’s exciting. I think the kid loves the sport,” said Antonio Tarver to ProBox TV about Ryan Garcia. “Many of us would have sat down and taken time to get well.

“Whatever it is he was going through. He said it was mental health issues. He has some growth and maturity about himself.” 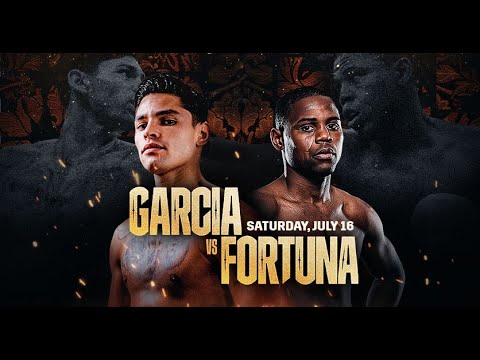