Vargas has much better options, and you hate to see him waste his star potential on the old toothless lion Santa Cruz.

Vargas schooled Magsayo, the featherweight division’s version of George Kambosos Jr. Like Kambosos, Magsayo took advantage of an injured champion [Gary Russell Jr] to capture a title that the otherwise wouldn’t have won last January with a 12-round majority decision.

Like Kambosos, Magsayo’s 15 minutes of fame ended in the first title defense of his WBC belt against Vargas, who had too much talent for him and exposed his poor ring IQ to win a comfortable 12-round decision.

“Now I want the unification bout,” said Rey Vargas at the post-fight press conference. “I want to fight Leo Santa Cruz. We’ve already talked about it with my team, and I’m ready.”

Magsayo’s fans are crying about wanting Vargas (36-0, 22 KOs) to give him an immediate rematch, but there’s no point in that. Vargas needs to move on to bigger & better things to make money and increase his fame.

Santa Cruz (38-2-1, 19 KOs) was a good fighter during his day, but he’s not done anything for many years now, and it’s useless for Vargas to waste time choosing to fight him.

Magsayo never gave Gary Russell Jr a rematch after beating him, so Vargas shouldn’t feel guilty following his path in not rematching champions.

It’s an unusual choice for the 29-year-old Vargas to choose Santa Cruz as the guy he wants to face next, as many fans view Leo as over-the-hill at 33 after watching him get blown out of the water in six rounds by Gervonta ‘Tank’ Davis last October, and witnessing his struggle to beat primary contenders Miguel Flores and Keenan Carbajal. Santa Cruz 9

At this point in Santa Cruz’s career, he’s a guy that is living off of his fame from 2000+ yesterdays ago. Rey Vargas would be better off taking advantage of the spotlight that’s on him now by facing one of these talented fighters: 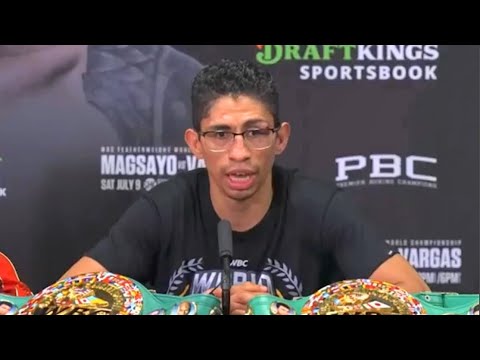