Unbeaten Ryan ‘Kingry’ Garcia (23-0, 19 KOs) obliterated an overmatched Javier Fortuna (37-4-1, 26 KOs), stopping the old veteran in the sixth round on Saturday night at the Crypto Arena in Los Angeles, California.

Fortuna was down three times in the contest, once in rounds 4, 5 & 6. The fight was stopped after Fortuna was dropped by a left hook from Ryan in the sixth and was counted out on one knee.

The way Fortuna sprang to his feet after being counted out suggests that could have continued fighting, but the heart wasn’t there. He wasn’t throwing punches and looked sluggish at the weight. The time of the stoppage was at 0:27 of the sixth.

After the fight, Ryan called out Gervonta ‘Tank’ Davis, saying he wanted him next. We’ll see if that fight happens or not.

Given that Tank fights on Showtime and Ryan on DAZN, it’s unlikely to take place because it’s not big enough yet for it to bring in huge numbers on two networks

In the chief support bout, hard-hitting welterweight contender Alexis Rocha dominated his opponent Luis Alberto Veron (19-5-2, 9 KOs), beating him by a 10-round unanimous decision. The fight resembled a cat chasing a mouse, as Vergon was on the run the entire time, doing little on offense, and trying not to get hit.

The southpaw Rocha appeared to hurt Vergon, 29, a number of times with his hard body shots, but he couldn’t put him down. Veron’s mobility was too good for Rocha to finish him.

Roach used his jab, and boxed smart, keeping Rodriguez on the outside, unable to land his shots. The judges scored it 117-111, 116-112, and 116-112. The victory for Roach makes him the WBA mandatory challenger to champion Roger Gutierrez.

The 27-year-old De La Hoya flurried on the 33-year-old Bernache in round four, resulting in referee Corona doing the sensible thing by halting the bout. The time of the stoppage was 2:51 of the fourth.

In the first, Bernache suffered a cut over his left eye from a clash of heads. That was the least of his problems, though, as De La Hoya was teeing off on Bernache with big shots and having an easy time of it.

The victory for De La Hoya was his second since losing to Ronny Rios by a sixth-round knockout in July 2019. Given the less than stellar opposition that De La Hoya has fought in the last three years, it’s impossible to know if he’s improved since his loss to Rios.

In other action on the card, lightweight Miguel Gaona (3-0, 2 KO) defeated Abdiel Padilla (1-3, 1 KO) by a first-round knockout. Gaona dropped Padilla twice with hard body shots. Referee Jack Reiss then gave Padilla a count and waved it off at 1:20 of round one. 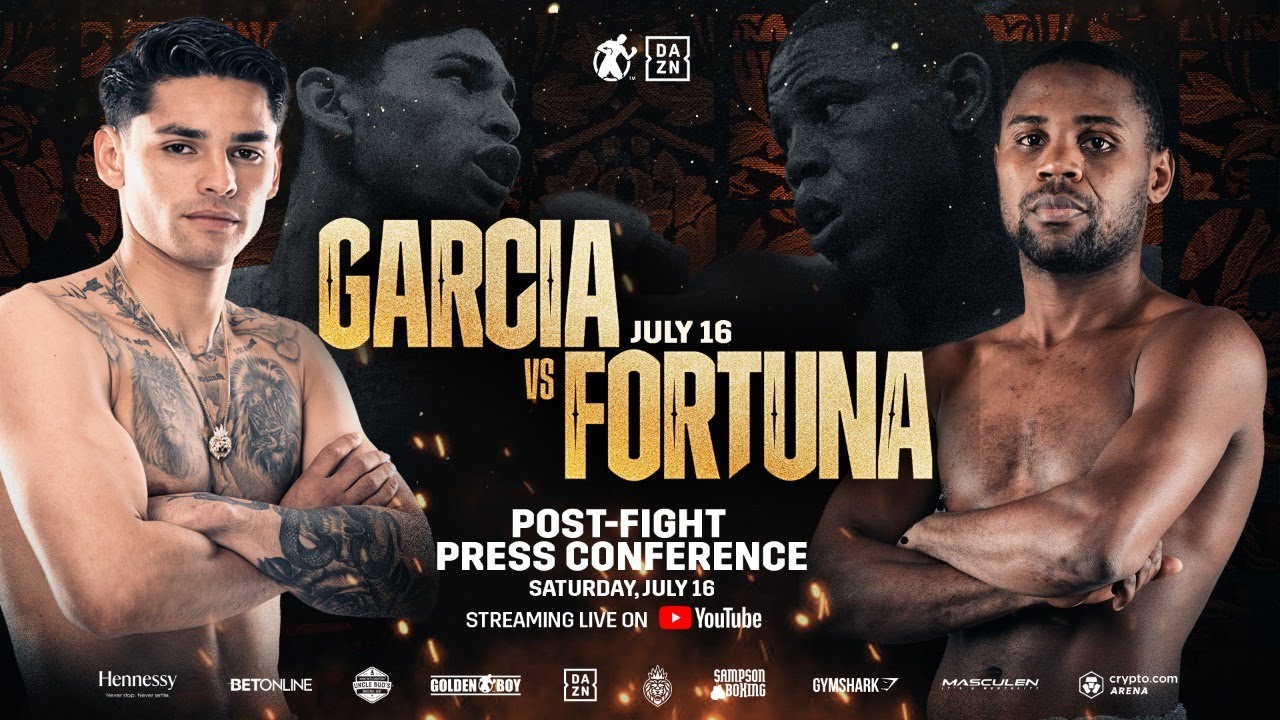 What’s interesting about the Garcia-Fortuna fight is how little time #2 WBC ranked lightweight contender Ryan has spent hyping it up.

The Golden Boy promoted KingRy has spent more time talking about a potential title shot against WBA ‘regular’ 135-lb champion Gervonta ‘Tank’ Davis than he has about Fortuna.

That could be a strategy for Ryan to get boxing fans interested in a fight that many fans felt was another dull mismatch involving the Golden Boy star.

Fortuna was already beaten last year by Joseph ‘Jojo’ Diaz by a 12-round unanimous decision, which made it kind of silly for Ryan to be fighting him afterward.

“Body style-wise, there’s a little bit of Oscar [De La Hoya] type of body physique in him, but I think Oscar was better. But he’s got a speed base, which is Oscar’s speed power base.

“If I wouldn’t see him and I just heard him on audio, the way he speaks English doesn’t come off to me in that. Granted, he’s not from East LA. There’s a certain accent they spoke with.

“I have a Bensonhurst accent. There was an LA Mexican Chicano accent. Ryan doesn’t speak that way. Don’t get me wrong. The Italian New Yorkers of this generation don’t really speak like me either. The accents are disappearing.

“I don’t know how many relations you give him for the Mexican thing. I just think he’s a social media guy who can fight, and if he wants to fight and chooses to fight, he probably has a lot of possibility of success.

“It’s nothing I haven’t seen before,” Ryan said to K.O Artist Sports about Fortuna getting mad during their final press conference.

“You had Braulio Rodriguez acting like this, and even [Emmanuel] Tagoe. I hit him, and he started shaking his head. These guys all try and play mind tricks like that, as if that actually works. It doesn’t work.

“It doesn’t do anything. It doesn’t instill fear in me. Actually, it kind of gets me excited because that’s what fans like to see. They like to see a little back-and-forth action.

So to me, I’m looking at a business and fan perspective. I’m happy for everybody. I’m not attached to it emotionally at all. So it’s all good.

“I felt the energy. He started screaming in my face. He’s the boogeyman. I said I’m the boogeyman slayer, and nobody cares. I don’t care if you called yourself King Kong. Mother f****, I’m the people that came to the island that captured your a**.

“I’m always going to have an answer for you. You’re not going to win. I wouldn’t say I’m guaranteeing them anything,” said Ryann Garcia when asked if he’s guaranteeing a knockout of Fortuna.

“I don’t want people to expect anything. Expect that I train hard, and I’m going to fight to my best ability. I don’t like to do that because it puts salt on the fight because you think about that.

“All I’m thinking is I’m going to deny that and just do me. I hope in my heart intentionally wise is that I want to hit him with a shot that sends shockwaves to the sport. I envision that. I want that to happen. I’m meditating on that.

“If you look at the pattern of my career, most of the time, I do get a great knockout. Hopefully, we shall see it again,” said Ryan Garcia.

Ryan Garcia moves up in weight to the 140-lb division to take on the always tough Javier Fortuna in a 12-round bout on DAZN in what should be a compelling contest from start to finish.

Garcia vs. Fortuna will be taking place at the Crypto Arena in Los Angeles. This is a fight that Ryan (22-0, 18 KOs) wanted to take a year ago in July, but the contest was delayed 12 months due to a mental health issue for KingRy.