Ryan Garcia is vowing to knockout Gervonta ‘Tank’ Davis later this year after he defeats Javier Fortuna next month on July 16th.

Like with his past fights, Ryan (22-0, 18 KOs) is choosing to look ahead to bigger contests rather than focusing on the task in front of him against veteran Fortuna (36-3-1, 25 KOs) on July 16th in the main event on DAZN at the Crypto Arena in Los Angeles.

Ryan, 23, says he wants to make a “statement” with his knockout win over Tank Davis, and he feels he’ll become the new “face of boxing” if he gets the victory.

The undefeated Golden Boy promoted Garcia is predicting his fight with Tank Davis will be bigger than the Errol Spence Jr. vs. Terence Crawford and Canelo Alvarez vs. Gennadiy Golovkin III.

If Ryan is correct, there will be a lot of money for him to make, and he could walk away from that fight with a lot of money, even if he loses.

“That’s where my head is focused on,” said Ryan Garcia to Fighthype about his desire to face Gervonta ‘Tank’ Davis after his next clash against Javier Fortuna.

“After this fight, when I beat Fortuna, I’ll go after Tank Davis, and I’ve said it before, I’ll be very transparent during the negotiations, anything we can share legally, and to really prove that I’m not here to lie.

“I’m here to make a statement in beating Tank Davis, and moving forward and who wins that fight will be the face of boxing after that. I truly believe that.

“Yeah, it’s bigger than both,” said Ryan Garcia when asked if his fight against Tank Davis is bigger than Errol Spence Jr. vs. Terence Crawford and Canelo Alvarez vs. Gennadiy Golovkin III.

“Just me combined with Tank, combined with the culture, and there’s so much hype around it. Even though it’s not that big right now that during the promotion, it would get so big that it would be like a wildfire. There would be no control over it.

“Our personalities combined, it’s just facts. It’s going to be a wildfire and is going to blossom to something that we can’t contain,” Ryan Garcia continued about his fight later this year against Gervonta Davis.

“It seems that way [a slugfest], but I think it’ll be a dangerous chess match for either one of us. I’ll hit him a lot more times than he hits me, I’ll tell you that,” Ryan said about Tank.

“If he really wants to get careless, I’ll sleep him. Right before his little chinny-chin, chin opens up, I’ll hit him so fast that he won’t even see it coming.

“He’ll be slept, gone, I promise you that or he’ll take a beat down to the point where they have to stop it. One of those are going to happen, and I know he’s going to be firing and trying to knock me out.

“Again, I have a lot of experience with hard punchers, and I’ll be very well prepared when I fight him. That fight is important for the fans and for myself. I’m going to be shooting. It’s not going to be my fault if he doesn’t want to do it,” said Ryan Garcia. 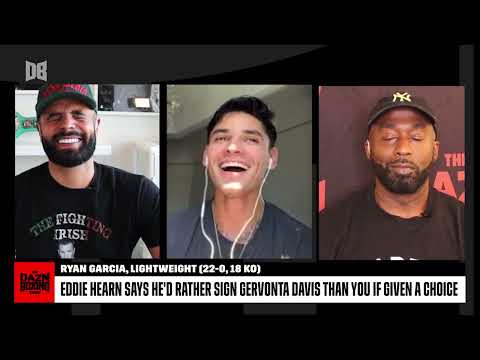