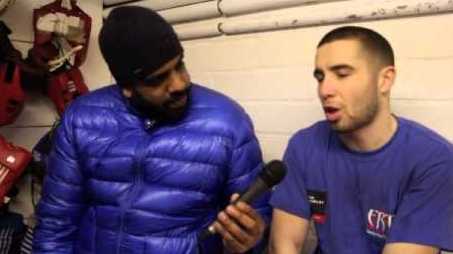 Much like his weight class contemporaries, current interim IBF Bantamweight champion Lee Haskins, Ross Burkinshaw and to a lesser extent – these days at least – multiple World champion and reigning WBA ruler Jamie McDonnell, he will do so with a level of anonymity seemingly reserved in Britain for the 118lbs weight class.

Farrag himself remains unconcerned by the lack of television coverage and home advantage that will accompany the biggest night of his career. Having been steeped in old school values instilled in him from the moment he stepped foot in the Everton Red Triangle gym, to him notoriety is earned.

“To me, it makes no difference that I have to travel for the opportunity, the way I see it, it’s just another ring. Of course, I expect a few boo’s, but that’ll just spare me on, I’m looking forward to the experience if I’m honest.”

“I like the fact that it is a difficult opportunity, everything I get I like to earn, I don’t want anything handed to me, I never have. Everything is more rewarding, when you have worked hard for it.” Said Farrag.

Farrag had looked set to burst onto the scene a little over 10 months ago when he demolished Ashley Lane in 7 rounds, 9 months after dismantling former World title challenger Jason Booth in 4-rounds, just 4 month’s after Booth had taken now World champions Haskins the 12-round distance.

It was less the level of opponent, more the manner with which Ryan Farrag dealt with opposition intent on winning rather than surviving. Farrag was ruthless and looking every bit a fighter destined for better things.

Fight cancellations, niggling injuries and politics have seen the 27-year old frustratingly held back, for a period that in the opinion of the young scouser has only made him a stronger fighter.

“Situations like the last 10 months either make you or break you. Every time there is a setback, it would be easy to throw the towel in and become bitter.”

“I’ve just stayed in the gym and carried on my education, fine tuning and staying sharp, improving every day with Mick and Paul [Stevenson] and I feel a better fighter for it.” Confirmed Farrag.

In the shape of Stephane Jamoye, Farrag faces the acid test that arrives for every fighter with designs on success, when theory is put into practice. The Belgian who has the pedigree; having shared the ring with exceptional World champions Shinsuke Yamanaka, Scott Quigg, Leo Santa Cruz and Jamie McDonnell, will be looking to recapture his 2012 form which seen him dispose of both Lee Haskins and Ashley Sexton in 8 rounds.

Whether or not Jamoye retains that relentless desire to impose his will on an opponent that made him such a formidable opponent remains to be seen, one thing is for certain, Jamoye presents a target that Farrag – who found ideal sparring with Kazakh bantamweight Zhanat Zhakiyanov at Ricky Hatton’s gym in Manchester – will not have to go looking for.

“I hope Jamoye comes at me all night, because that will play into my hands as a counter puncher. But, if I have to go looking for him I will, I am prepared for all possibilities. It won’t be my power, or skill that will win me this fight, it will be my boxing brain, I am the smarter fighter and can’t wait to prove it.”

“I couldn’t have had better sparring than I had with Zhakiyanov, a strong, tough man challenging for the interim WBA title in his next fight. They were good competitive spars that have filled me with the confidence. I couldn’t be better prepared.“ Farrag declared.

It has the makings of an intriguing fight, which most will struggle to see, as is tradition with an upwardly mobile British bantamweight. But, Ryan Farrag is used to the shadow of anonymity, assured that should he execute to the fullest of his abilities the lights which he will have more than earned are just around the corner.