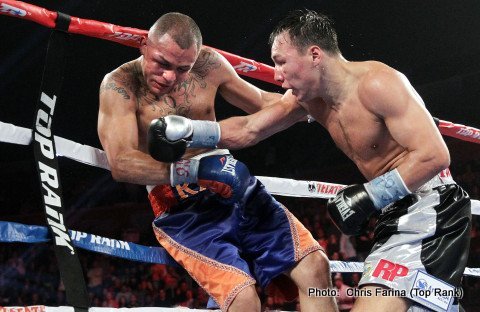 Ruslan Provodnikov is not the type of boxer that lets a loss force him to abandon dedication and hope. His fights are far from dull, with Provodnikov forcing the action bell to bell. May it be his stamina or will, Ruslan comes to not only win, but showcase. He isn’t a fighter that most would consider technical, accurate, or even ring-smart for that matter (ring I.Q. is not something that many fighter can master), but he makes up for all those things with providing raw entertainment for those looking to watch a fight.

Currently he is 24-4-0, with losses against Mauricio Herrera, Timothy Bradley Jr., Chris Algieri, and Lucas Matthysse. Most share the opinion that it was the Bradley fight that created a huge fan base for Provodnikov, as he forced the non-stop explosive action which surprised not only the people watching the bout, but sent a shock through team Bradley as well, ending the fight with much controversy.

Now Provodnikov says that he is once again inspired to make the trek to the top, and will start with the dangerous Jesus Alvarez Rodriguez (14-0-0).

“My next opponent, is young, motivated fighter, and is undefeated. Rodriguez, is the kind of fighter that keep hitting, and for him a fight against me, is a big step forward. I need a good and bright return, because I have made it my goal to become a world champion again. The most direct way is to come out and beat everyone. Plus I want to grow and progress. This is exactly why I got a new trainer. All the doors for TV aired bouts are open for me, all is well there. Thank god that fighters like myself will always have a chance,” said Provodnikov in a recent interview with sport.ru