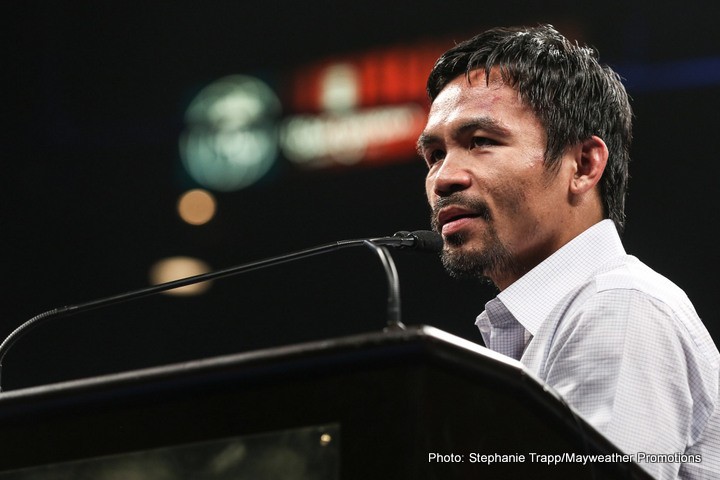 In recent news, various sources suggested that Manny Pacquiao will be retiring after one more final fight. Next year, likely in the month of April, right around the time when the brand new gigantic MGM AEG arena will open its doors in Las Vegas, Nevada, Pacman is looking to close the doors to his career. The finality is always as important as the entrance, and leaving the sport of boxing with a bang is something that can certainly elevate a champions stock in history.

In a recently posted video, Manny Pacquiao says the following: “I don’t know who is my opponent next. We’re still negotiating right now about the rematch with Floyd Mayweather, so hoping for that.”

Despite the fact of Bob Arum’s constant denial of such talks, there might be something significant going on behind the curtains. Pacquiao not only wants this rematch, but more importantly needs it. He needs it for his own closure, he needs it for his fans, and he needs it to close the book on his exhilarating career.

Is it a coincidence that there were some rumors about Mayweather Jr. coming back for his 50th fight in May of 2016? What a better way for Floyd to truly leave the sport in a blockbuster fashion than to round off his wins to 50 in a brand new, state of the art 20,000 seat arena.

Of course those rumors were also recently shut down by Leonard Ellerbe via Twitter, posting: “Floyd Mayweather is RETIRED, end of discussion.”

If Pacquiao would be willing to take a smaller cut, there is no reason for this rematch not to take place in the AEG arena next year. Imagine the hype, with both fighters crossing the ropes for the very last time. Both already legends, with an army of fans behind them, history books filled with their achievements, and most importantly a chance to finish with fireworks.