Roy Jones Jr is volunteering to be the opponent for Oscar De La Hoya to face when he makes his comeback on July 3 in an exhibition fight on Triller pay-per-view.

The highly popular ‘Golden Boy’ De La Hoya (39-6, 30 KOs) is expected to bring in a tremendous amount of revenue from pay-per-view, and he must pick an opponent that will interest fans.

However, many boxing fans felt angry afterward, complaining that Jones and Tyson looked like they were intentionally taking it easy on one another, throwing punches slowly and not landing with power. It was such a poor fight. I know it was an exhibition, but it was godawful to watch.

If the Tyson-Jones exhibition was free, that’s one thing, but it was a bad product for pay-per-view. It’s doubtful that De La Hoya will want part of that. He needs to entertain the fans, not anger them by giving them a bad product.

The eight-round exhibition looked like a choreographed movie rather than a fight, and it was a letdown for boxing fans. Many fans complained bitterly afterward that the Tyson vs. Jones Jr exhibition looked staged. 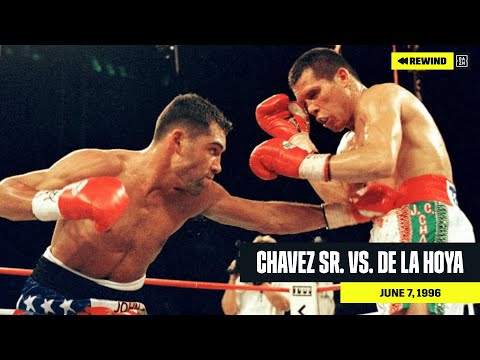 If De La Hoya is comfortable with the backlash that he could receive by fighting Jones Jr in the same type of match, he should pick him as his opponent, but it would probably destroy fan interest in his future exhibition matches.

If this was just a one-and-done thing for De La Hoya, he could fight Jones in a slow-motion fight similar to the Tyson-Jones match, but the fans would likely feel ripped off and unwilling to purchase Oscar’s future fights.

For that reason, it’s probably a good idea that De La Hoya NOT fight Jones because he needs someone that will make it a real fight, not a repeat of the boring Tyson vs. Jones Jr eight-round exhibition match that fans saw last November.

“I spoke to Roy today and he is feeling great, and is willing to fight Oscar De La Hoya,” said Alfy Smith, Roy Jones Jr.’s trainer.

“Now would be the perfect time to give the fans a great fight that they’d thought they would get to see.

De La Hoya has one of the greatest left hooks in boxing history, Roy has a devastating hook as well, we shall see who will be the real “Captain Hook.”

Given how disappointing the Mike Tyson vs. Roy Jones Jr fight last November, De La Hoya go in a different direction towards a fight with Conor McGregor or Manny Pacquiao for his July 3rd fight.

We already saw how bad the Tyson-Jones exhibition was. De La Hoya doesn’t need that. He needs to make the boxing public believe it’s a real fight, even if it is an exhibition. McGregor or Pacquiao would be perfect for De La Hoya.

“The fans all over the world love Roy Jones Jr and Oscar De La Hoya, continued Smith. “This is a great fight, an exciting matchup where you would only dream it up in a video game, now we have a chance to make it a reality. Roy is still active and training every day, he’s in tremendous shape and his speed is still crisp.”

It would be anything but exciting if De La Hoya were to face Roy Jones Jr in an exhibition match.  What De La Hoya needs is a rematch with Pacquiao or maybe someone like Mikey Garcia.

De La Hoya is 48, and it’s important that his opponent not be someone who is too old to interest the younger boxing fans.