WBO super featherweight champion Jamel ‘Semper Fi’ Herring has plans on taking on one of the other 130-lb world champions in a unification next if he’s successful in his title defense against Carl ‘The Jackal’ Frampton this Saturday, March 4th at the Caesars Palace Dubai, Dubai.

Herring, 35, might not get a chance to fight any of the other belt-holders at super featherweight, as he’s viewed as the underdog against former two-division world champion Frampton (28-2, 16 KOs).

It’s a toss-up fight that either guy can win, and it wouldn’t be a massive surprise if the taller 5’10” Herring is able to pull off the victory.

The champion at super featherweight that both Herring and Frampton are clearly targeting is WBC champ, Oscar Valdez. A fight against the unbeaten Valdez would be huge for either guy.

WBO mandatory Shakur Stevenson hopes that he’ll get the Herring vs. Frampton fight winner, but it’s not looking good for him. Frampton has already said he wants Valdez if he captures the WBO title on Saturday, and now it appears Herring has the same idea.

The 23-year-old Shakur is young enough to wait until he eventually gets his shot at the WBO belt.

He’s likely only going to need to wait for one fight before he can battle for the WBO 130-lb title, be it against Frampton, Herring, or Valdez.  Herring may vacate the WBO title and go up to 135 to challenge for a title.

With Herring’s WBO title, he can use the strap to become mandatory for WBO lightweight champion Teofimo Lopez.

If Teofimo were to force it into a purse bid situation as he did with his IBF mandatory George Kambosos Jr, Herring could get a big payday if a Triller bids.

This is guesswork at this point. We don’t know that Herring will win on Saturday, and if he does, he might choose to go after Valdez rather than move up to 135 to take on Teofimo.

“You know, that has popped up. I talked to my advisers over at MTK. They looked at me like, ‘You’re a massive dude. You’re a big guy.

“Maybe we can go make a run at lightweight'” said Herring to The Athletic about possibly vacating his WBO super featherweight title and moving up to challenge for a world title at lightweight if he beats Frampton on Saturday.

“But if it were up to me, my dream is to become the lineal champion in the [130-lb] the division. We live in an era where there are so many belts.

“Being honest, there are too many belts. So you always get a debate, ‘who is #1?’ And if you want to be known, you’ve got to fight the man up top and I believe for that lineal title.

“That’s just something I believe in. Like I said I believe as a throwback fighter.

“That’s just who I am. I don’t want to leave the division without possibly [unifying] because I been chasing unifications since I got the WBO belt.

“Hopefully, if things go my way, I would love to fight any unification match-up. If not, my goal is to still grab another world title, even if I have the opportunity to become a two-division world champion,” said Herring.

Whatever pays the most money is what Herring should be focusing on. If he can make more money fighting Oscar Valdez than moving up to challenge Teofimo Lopez, so be it.

How to watch Herring vs. Frampton 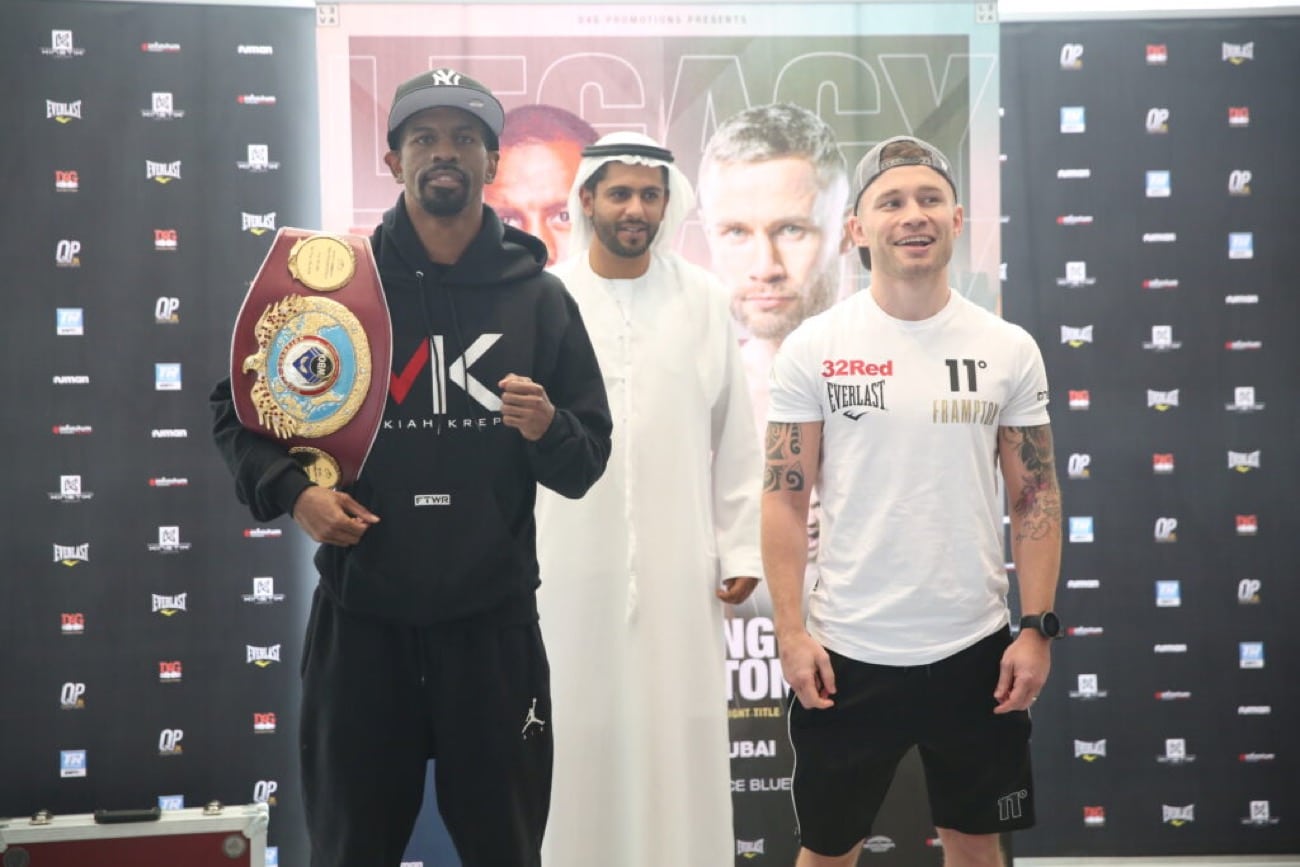 For boxing fans that don’t have ESPN+, they can live updates of the Herring-Frampton fight right here at Boxing247 on Saturday.

Weights from earlier on Friday at the weigh-in: