But one of Duran’s sweetest victories came on his birthday back in 1983. As fans know, Duran turned 70 today, the greatest living fighter still an imposing figure as well as a man of relevance, and tributes have been coming in.

It was back on the evening of June 16, 1983, when Duran, just six fights removed from the “No Mas” disgrace (with two of these fights being losses), challenged young and unbeaten WBA 154 pound champ Davey Moore.

Duran was 32, he was still haunted by his “cowardly” actions, he was past his best, and he was moving up in weight. Moore from The Bronx was just 12-0, and he was just 24 years of age. Moore’s inexperience would hurt him badly in the Duran fight.

In actual fact, it was not a fight; it was a beating. A beatdown. A mugging disguised as a boxing lesson. Moore never had a chance. 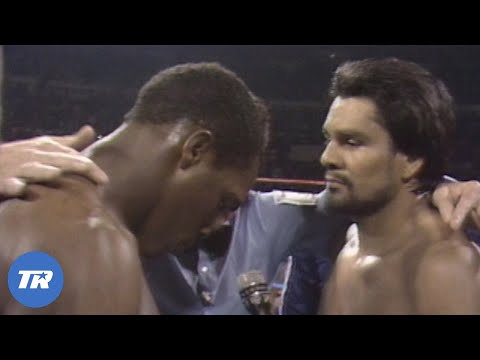 Duran had regained his once terrifying snarl, his dark eyes back on fire. Moore gave it his best shot, but he was very possibly the victim of the nastiest version of Duran the world ever saw.

Duran did it all: he raked Moore with the laces of his glove, he thumbed him in the eye, and he hit him pretty much any place he wanted. And that was just the illegal stuff. Duran was also a master of slipping shots on this night, while his body punching was murderous.

Moore, his right eye slammed shut and his mouth hanging open, showed amazing heart and guts – heart and guts the referee (and Davey’s own corner) never should have allowed him to show.

For by round six or seven, Moore was a thoroughly beaten man. Moore took a serious beating before he was finally sent crashing in round seven.

Moore, his head having been slammed around, went down hard. The fight should have been called right there and then. Instead, the defending champ staggered back to his corner and was then, quite disgracefully, allowed to come out for more.

Round eight saw the sneering Duran show zero mercy. Moore took more punishment, the fight being hard to watch, before, finally, Davey’s corner threw in the white towel of surrender.

The bloodthirsty crowd had enjoyed the carnage (most of them at least, some in attendance had been screaming for the fight to be stopped for quite some time) – and then Duran was treated to a spontaneous rendition of “Happy Birthday.”

The born fighter of all born fighters was king of the world once again. “No Mas” never quite went away, but it was placed firmly in the rear-view mirror on this night at Madison Square Garden.

Sadly, Moore died in a freak auto accident in 1988. He was just 28. Moore had finished with an 18-5(14) record, Davey having gone 6-4 after the Duran beating; included here a quick stoppage win over Wilfred Benitez.

As for Duran, well, how did he celebrate his career-reviving win? With a challenge of the great Marvelous Marvin Hagler in his very next fight, that’s how. They sure don’t make ’em like Roberto no more.