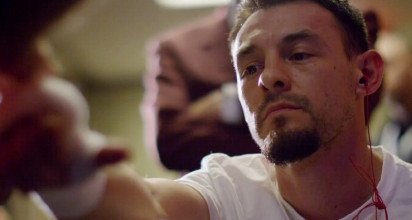 With the various problems that have beset him outside of the ring during his career – notably the illness of his wife, who battled leukemia – Robert “The Ghost” Guerrero has not been as active as he would like to have been over the last few years and has told ThaBoxingVoice.com that now – under Al Haymon – regular, quality fights are no problem – and that inactivity should no longer harm his career.

Guerrero, who headlines the PBC broadcast from Carson, California on Saturday against Aaron Martinez, topped the inaugural event back in March when he dropped a decision to Keith Thurman over 12 hard fought rounds.

This upcoming 10 rounder is something of a must win if the (legitimate) 2 weight champ, who also held interim titles at 135 & 147, is to reignite his career. Something he is acutely aware of.

After the hard slog against Thurman, many questioned the wisdom of being out again so soon, yet he has been matched carefully against the inactive Martinez – who being polite, is now 34 and a good couple of levels below ‘The Ghost’ in terms of class.

A confidence builder to bounce back, that’s for sure.

“I haven’t been that active in the last couple of years, so – me and my team sat down and (realised) that’s what’s been hurting me. Not being sharp, not being active – with all the lay-offs, half year layoffs. I’ve done it before but I’m not 25 anymore you know?”

Clearly stating his intention to fight regularly, especially given he is now 32, he said;

“(I need to be) Staying active and keeping my tools sharp – shaking off that ring rust, it takes a couple of fights. You may think that you’re feeling good in the gym but everything changes when you’re in an actual fight in that ring.”

Giving an insight it to why so many fighters seem to seek the ‘advice’ of the elusive yet seemingly omnipotent Al Haymon, he said;

“With Al Haymon now the fights can be made, you know, very quick – and there ain’t no back and forth arguing or (any) bad stuff going on – it’s just everything’s so smooth and everybody’s happy, so it makes life a lot easier. Inside the ring AND outside the ring.”

Guerrero v Martinez is on NBC in the US/Boxnation in the UK on Saturday.