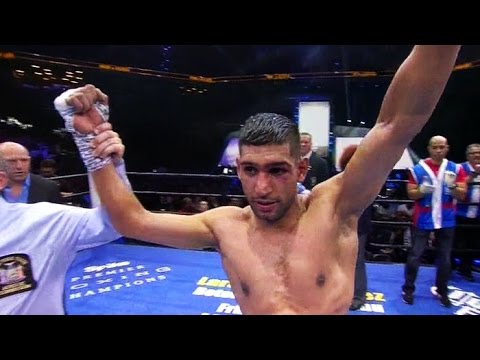 Amir Khan improved to 31-3 when he was awarded a unanimous decision victory against Chris Algieri this past Friday at the Barclays Center in Brooklyn, NY. Two of the judges (Benoit Roussel and Joseph Pasquale) scored the bout 117-111 for Khan, in a bout that seemed far more competitive than those tallies suggest. Don Ackerman’s score of 115-113 for Khan seemed much closer to the mark. With the loss Algieri’s record drops to 20-2, having now lost 2 in a row since making a name for himself with his upset victory against Ruslan Provodnikov one year ago.

In the post fight interview Khan made his intentions clear as he stated unequivocally that he is interested in facing the pound-for-pound king, Floyd Mayweather Jr, who is coming off a career defining victory against Manny Pacquiao one month ago. Mayweather intends to fight again in September, and Khan is hoping the victory over Algieri will put him on a short list of possibilities for opponents angling for a career high payday that comes with winning the Mayweather sweepstakes.

A lot of fans are under the impression that Khan poses a serious threat to Mayweather’s unblemished record as a result of his speed, athleticism, and ability to throw fast combinations. Other fans disagree and contest that Khan brings nothing new to the table that Mayweather hasn’t already encountered and beaten before. Does Amir Khan pose a real threat to Floyd Mayweather Jr? Or is Khan just in this for the payday and the attention that comes with facing Mayweather? This edition of Rummy’s Corner attempts to answer these questions and more!

Does Amir Khan deserve a fight with Floyd Mayweather Jr?

Check out this video to get one man’s take on the situation.