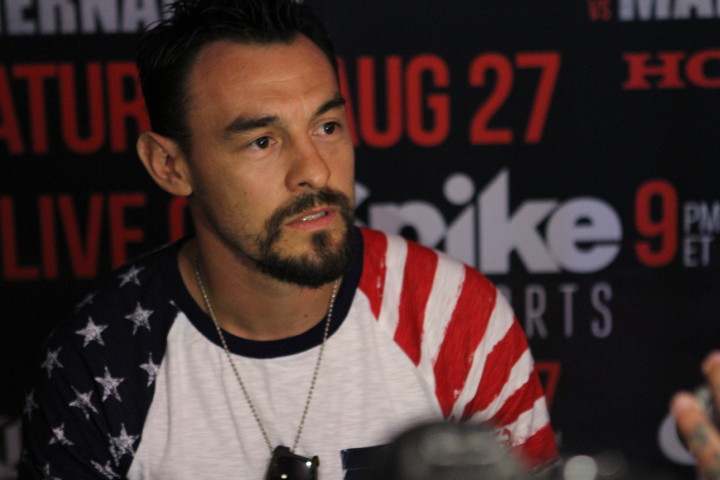 Fighters competing on Saturday’s Premier Boxing Champions on Spike card took part in a media workout Wednesday to officially begin fight week for the back-to-back nights of combat sport action on Spike as boxers joined Bellator fighters at RCVA Gym in Costa Mesa before they step into the ring at Honda Center in Anaheim, Calif.

Tickets for the August 27 event, which is promoted by TGB Promotions, are priced at $31, $58, $108 and $203, plus applicable fees, and are on sale now. Tickets are available via ticketmaster.com, Ticketmaster retail locations or by calling 800-745-3000. Tickets are also available at the Honda Center Box Office.

Fighters prepared for their impending bouts and spoke to media about their matchups, the exciting weekend of action in Southern California and more. Here is what the fighters had to say:

“Peralta is a tall guy but I’m used to it. Kamegai was bigger than I thought he’d be, but I handled it. I have to feel him out and go from there.

“I’m going to try and execute my game plan. We want to put pressure on him. I’ve had really good sparring for this and I’m ready to go.

“My opponent is kind of a laid back fighter. He’s going to wait for me to come to him and try to counter. I saw a lot of him laying on the ropes, so I’ll come inside and try to give the fans a great performance. I’m excited to get in there.

“I’ve worked on a lot of things during camp. I’m working on staying more on my toes and breaking some of the bad habits I’ve had. I like to just go forward but there is a lot more to my game. I have to work behind my jab and I think I’ll have success.

“I’ve had so much repetition in the gym and that’s been key to my game. I have to work hard in the ring. I can’t just mow everybody down.

“I’m ready for a world title shot now. I want the Danny Garcia rematch. I feel like I won the fight. He had some flashy shots but he didn’t want to fight. It is what it is and it motivates me to get back to that position.”

“I’m physically and mentally prepared for this fight. Robert Guerrero is a great fighter and a great champion. I’ve seen everything he’s done and I think this is my time.

“The United States is a beautiful place and I’ve enjoyed being here very much. I’m going to give a very hard fight on Saturday night. I’m going to leave it all in the ring and come out with a victory.”

“I have the same hunger and passion that I had in the beginning of my career. ‘The Dog’ was asleep for a couple of years but he’s woken up now.

“Right now the only goal is to win this Saturday. I’m hoping that next year I can contend and fight for a world title. I have always fought the toughest fighters and I’ve never been afraid of a challenge.

“I feel strong and my weight is good. I hope my opponent had a great training camp. I want him to be at his best so that we can put on a great show for the fans. We are both tough Mexican fighters so you can expect us to stand and throw punches.

“It’s very important for me to fight for the fans. This is a huge fight for my career. I want to live up to what the fans expect from me.

“There have been a lot of changes in my career. I’ve gone through different trainers but now I have some stability with Romelu Quirtate. I feel very stable and confident with him. There are a lot of good fighters in camp and we push each other.”

“I had a good training camp and I’m going to surprise people in this fight. I know that I need a victory here to continue fighting at a high level.

“Everyone knows my style and everyone knows Angulo’s style. We both like to throw punches and we fight with our hearts. It’s going to make it a great fight Saturday night.

“I feel very strong at this weight and I think I have more to give to this sport. I’m going to leave my soul in the ring. I’m looking to hurt Angulo.”

“I’m liking the fights and the opportunities that I’ve been getting. This guy is a tough competitor and it’s a chance to show the world how good I am.

“I’m ready for anything my opponent brings. I know that he is going to bring pressure. I won’t back down. It will bring out the best in me.

“I want to keep working towards bigger fights. But I’m focused on this fight and I’m going to find a way to win.

“My camp has been focused on working my jabs, being smart and moving. I’m staying in great shape and I’ll be ready to go Saturday night.

“I’m ready for any opponent. I feel right now like I can fight for world title and Saturday is my opportunity to show people that. I’m going to prove myself.”

“I’m coming into this fight with a lot to prove. I’ve known Gausha for a long time and I definitely think I have the tools to beat him and do it convincingly.

“This is a great opportunity for me and I’m very thankful for it. I have the chance to breakthrough to the next level with a victory here. I’ve worked too hard not to get a win.

“My training camp was very long and we worked hard from start to finish. Now all that’s left is to get in the ring and I can’t wait.

“There’s nothing better than coming to an opponent’s home and getting a victory. He’s comfortable out here now but I’m going to make him real uncomfortable Saturday night.”