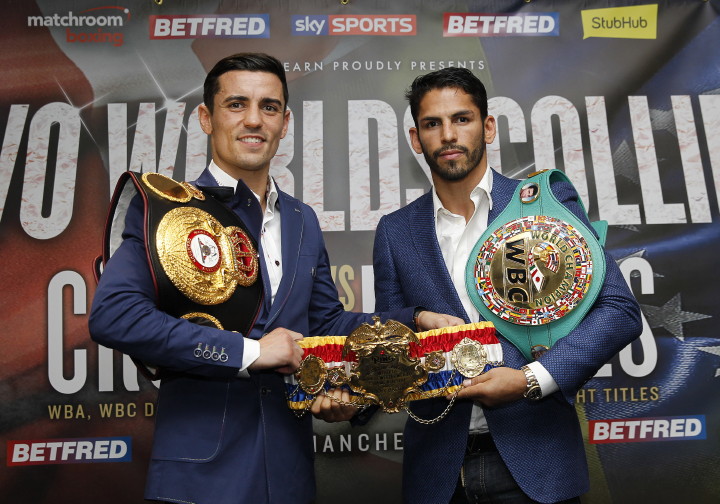 WBA king Crolla is hunting a third knockout win in world title fights at his hometown fortress having landed brutal body shots to first rip the title from Darleys Perez in their November rematch. He previously destroyed the avoided Ismael Barroso in his first defense in May.

Venezuelan star Linares is no stranger to English soil having beaten Kevin “Mighty” Mitchell in London in an epic battle for his WBC strap last May, and the 31 year old is delighted to be back in the UK and looking to add more hardware to his impressive collection.

Below are what the fighters and their teams had to say:

“This is a legacy fight for me. Every young kid wants to become a World Champion and I’ve done that now. I don’t want people to think I’ve settled with that, I’m hungrier than ever and I like the huge nights way too much to let it go now – I’m happy to win the belts and go to Vegas for the rematch though!

“Sometimes I have to pinch myself to see myself at how I’ve got here. Everyone in the gym are fans of Jorge Linares – Callum Smith isn’t sure who to cheer for on the night! I think he’s a great fighter, but on the night that respect goes out the window and we’re fighting for one of the great prizes in the sport.

“The Arena is going to be rocking and that’s my house, and I want to keep those three belts in Manchester. We’re working so, so hard in the gym because Jorge Linares is a phenomenal fighter, and I’m honoured to be fighting him in my house.

“I’ve done that ring walk so many times in front of a huge crowd and you can’t beat that feeling, the energy the crowd will give me is going to help me produce the career-best performance I will need to beat Jorge Linares.”

“It’s another big fight and big event that I’m grateful to be a part of.

“It’s my second time in the UK, and I really enjoy fighting here. The UK has some of best boxing fans and it’s always great to come out and perform for them in the packed arenas.

“Crolla and I have similar styles, there’s lots of respect between us and we’re working very hard because I know it’s going to be a tough fight. But I want to win those belts and be the unified lightweight champion of the world. I am ready for the challenge and ready to claim my crown.”

“These two fighters are great world champions and I am delighted The Ring Magazine Title has been added, it is one of the most sought after belts that fighters really want to get their hands on.

“It’s a pleasure to work with Robert Diaz and Golden Boy Promotions – he shares the passion of the best fighting the best. Jorge Linares is a three-weight world champ and the best in the division – at the moment. Jorge Linares deserves great respect for coming over, and he’s already done so against Kevin Mitchell in a wonderful fight this past year.” 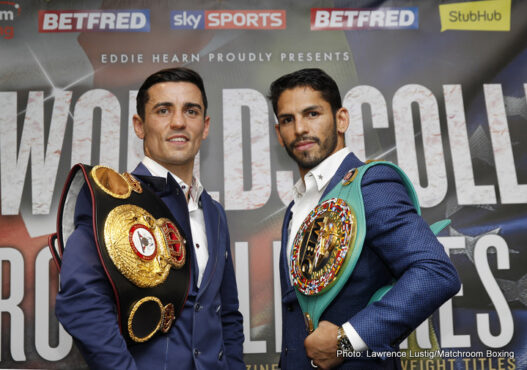 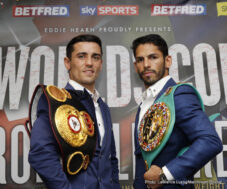 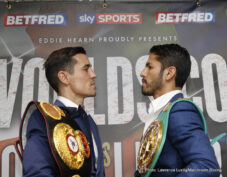 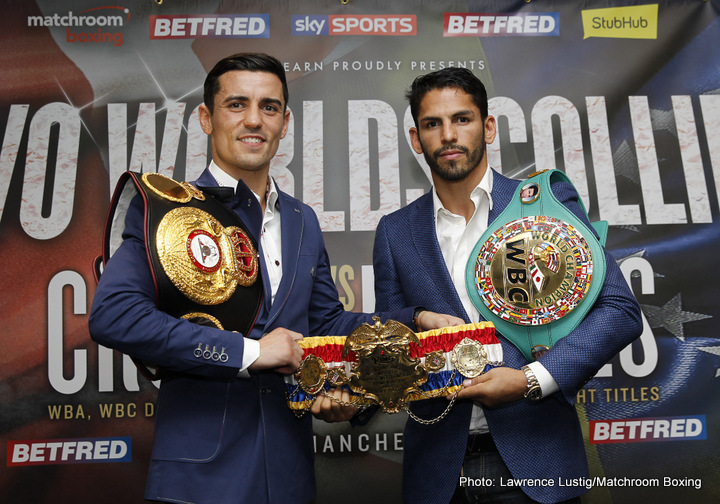 “As Eddie said, this level of fights is not done as often and made as easy as this. We got this done in a couple of days because the two fighters are similar.

“Anthony Crolla is a tremendous fighter and person, and he improves with every fight. I applaud him for wanting to fight the best.

“Jorge Linares is similar to Anthony Crolla. He has been to England to fight Kevin Mitchell, and I said to him ‘you are going to Manchester and the fans are loud,’ and he said ‘I will wear headphones.’ Jorge Linares wants to get that WBA belt, and he’s determined to get the victory on September 24.”

JOE GALLAGHER, 2015 Ring Magazine Trainer of the Year and Trainer to Anthony Crolla:

“I have huge respect for Jorge Linares and Robert Diaz for both taking the fight and coming to the press conference too. I’m used to fights with trash talk but there’s lots of respect here.

“Both men are at the peak of their careers right now and coming into the fight on the back of great victories, these are the two best fighters in the division and we’ll find out who the best is. Both men are a credit to the sport and it’s going to be an honour to share the ring with Jorge Linares, a world class fighter. But Manchester is going to be bouncing on the night, and Jorge Linares will witness something special.

“Anthony Crolla nearly lost it all and that became a sharp reminder how you can lose everything in a heartbeat, and his performances since then have shown that. He’s hot right now and that’s why we’re taking on the best in a row because the better the opponent, the better he fights.

“Jorge Linares can box, can fight inside and at range, so Anthony Crolla has to raise it again – and that’s what he’ll do. Anthony Crolla beat the most dangerous man out there and now he’s going to beat the best.

Anthony Crolla vs. Jorge Linares is a 12-round fight for the WBA, WBC Diamond and the Ring Magazine Lightweight World Championships presented by Matchroom Boxing and Golden Boy Promotions in association with Akihiko Honda’s Teiken Boxing Gym.