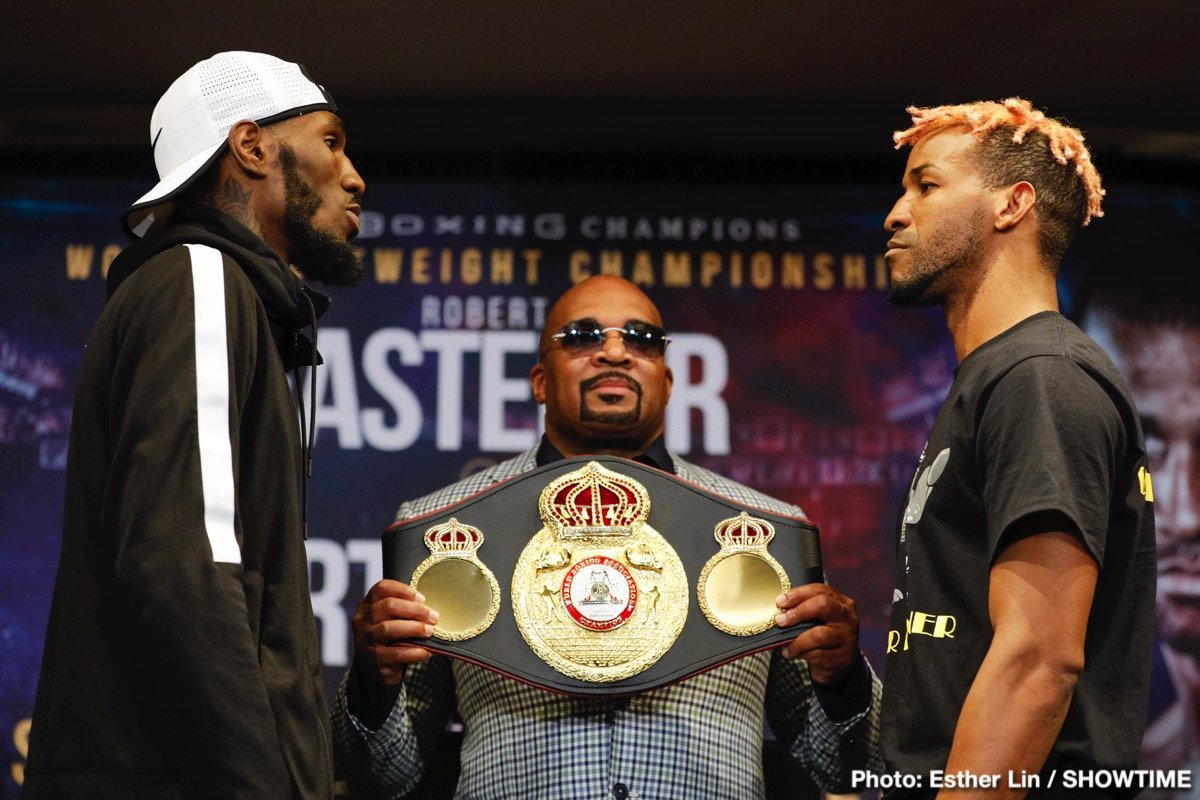 Former lightweight champion Robert Easter Jr. and former two-division champion Rances Barthelemy went face-to-face Thursday at the final press conference before they meet for the vacant WBA Lightweight title this Saturday live on SHOWTIME (10 p.m. PT /7 p.m. ET) from The Chelsea inside of The Cosmopolitan of Las Vegas and presented by Premier Boxing Champions.

Also squaring off Thursday were former champion Viktor Postol and France’s Mohamed Mimoune, who battle in a WBC Super Lightweight Title Eliminator, plus rising heavyweight sensation Efe Ajagba and Germany’s Michael Wallisch, who meet in a 10-round attraction.

Here is what the press conference participants had to say Thursday from The Cosmopolitan of Las Vegas:

“I’m not here to talk about any past or future fights. Right now I’m focused on this fight against Rances. Come Saturday you’re going to see what I’ve put myself through during this camp.

“Not only have I learned a lesson from fighting Mikey Garcia, but I also learn something new after every fight. I went back home to Toledo for this one and got back to basics with my dad and Mike Stafford. We put in the hard work and you’ll see it on display Saturday.

“This fight is going to be a lot of action and I don’t think it’s going to make it to the final bell.

“I’m highly confident right now coming off of the hard work in training camp. The connection with my dad is so great and all the time we spent in camp is going to pay off Saturday.

“We had a tremendous camp. I’m hungrier than ever right now to get back in the ring and show everyone that I deserve to be at the top. The only dance I’m going to be doing on Saturday night, is to the bank.”

“I’m excited for this new opportunity that I have in front of me and I’m not going to let it go to waste. I’m taking that belt with me on Saturday night.

“I always have good fortune fighting here at The Cosmopolitan and I believe I’m going to take home the victory Saturday night.

“I take nothing away from Robert Easter Jr., because he’s a great champion. But I can do everything. I can fight on the inside, on the outside, I have power and I’ve fought against great opposition.

“I never dreamed of making it this far, especially coming from where I did. The dream of professional boxing didn’t exist. To be in this position already, it makes me want to keep chasing bigger fights and leave behind a big legacy.

“I have a very competitive fight in front of me. I’ve worked with Joel Casamayor, who has great experience combined with mine. We have great chemistry and I’m ready for everything to come together on Saturday night.

“I thank Robert Easter Jr. for taking the challenge, but I’m going to make him dance to the rhythm of the ‘Cuban Salsa’ on Saturday night. It’s going to get caliente.”

“My team and I had a great camp and I’m excited to be here and see what my opponent is going to bring for Saturday’s fight. I’m ready for a great fight.

“I trained hard like I always do. I have the experience against top fighters and I’m ready to prove that I’m still one of the best.

“I want to become world champion again. I’ve fought much better opponents than Mimoune and it will show on Saturday. My plan is to box, break him down and if the knockout comes, I’ll take it.”

“I’m very excited to fight here in Las Vegas and I want to tell the American fans that I guarantee a great fight on Saturday night. I’m coming to win.

“It was a very good camp, and it fully prepared me for war on Saturday night. I’ve worked hard to be in the best shape of my career.

“Every fighter is different, so we’ll see if he’s my toughest opponent once I’m in there. I respect him and I know that he’s a good boxer, but he doesn’t have anything I can’t handle.

“I’ve studied Postol closely and I’m ready to fight. I have the strategy and game plan prepared to get the win. I’m focused 100 percent on getting this win.”

“This is my first time in Las Vegas and I’m very excited to be here. I’ve been studying my opponent and I know he’s a good fighter. I can’t wait to get in there on Saturday and show off my skills.

“Every time I fight I go back to Texas and start training again. I’m facing a good fighter, but I’ve been preparing for him. I have a powerful jab that I’m looking forward to showing off.

“In one year, or maybe two. I think I’ll be fighting against top guys. We’re going to keep stepping up. This is my first time fighting on SHOWTIME so I’m looking forward to that step.

“It’s up to my opponent how long the fight lasts. I never say I’m going in to knock him out. I have to feel it and find the moment and see what he gives me.”

“I come from Germany to bring a show to the fans. I love this city already and I want to win so I can come back again. I’m fighting a tough guy on Saturday, but I’m also very tough. May the best man win.

“I had a little less than a month’s notice for the fight but I had already been training and sparring very well. I think that I’m going to bring that great work into the ring on Saturday.

“I think for sure I’m the toughest opponent of Ajagba’s career. I will be the first rock that he has to climb. At heavyweight, everybody has power. We will see on Saturday what he has.

“I trained very hard with Alexander Dimitrenko, who is another tall fighter. It prepared me well and I think we’re going to go toe-to-toe for as long as it lasts.”

“We were really focused for this camp. We stuck with what we know and went right back to how we started in this sport. Robert loved the camp.

“Robert is hungry. He’s always been a hungry fighter. The loss was a huge lesson for him. He treats every fight like it’s the last fight. I see the fight going our way.”

“I’m very happy to be working with Rances. He’s a great fighter and we’ve been working together to perfect his boxing style. His improvement in a short time has been outstanding.

“We are going to give the fans a surprise. We are winning by knockout. It’s going to be ‘Easter Dinner’ on Saturday night. He better be ready. Rances is bringing the knockout.”

ROY JONES JR. (on working with Mohamed Mimoune leading up to the fight)

“I like a lot of things about Mohamed. He’s a high-energy fighter and because of that, he can do anything that he wants to do. I’ve explained to him that he needs to go out there and be who he is, and not let Viktor Postol be who he wants to be.

“Mohamed needs to take control of the fight and keep control. If he gives control back to Postol, he’s going to feel like he can dominate. You have to hold on to that momentum.

“It’s a very good matchup stylistically. Both guys are tall and long. I think Mohamed beats him in the end because he’s smarter and hungrier. He hasn’t been beat in a long time, and if he dictates the pace, he’s going to win.”

“Ajagba wants to learn everything in the gym. He wants to be the best heavyweight out there. He just turned 25 on Monday, so right now we’re just picking our spots and letting him develop. We’re not trying to force anything. Slowly but surely he’s moving along.

“He’s still young in the game, but I think he could compete with a lot of the top guys right now. It’s a learning process. He needs to take those steps one at a time. We’re at a good pace right now that we’re both happy with. Within another year, he’s going to make some noise.”

“What a terrific card we have this weekend from top to bottom. It’s exciting to see young fighters on the rise, former world champions and more making up this great card.

“It’s not too often you get fights like these, with former world champions still in their prime. I’ve seen Robert Easter Jr. mature through the ranks and fight on the big platforms. He came up short in his last bout against another great champion in Mikey Garcia, but I think he took invaluable experience from that fight.

“Anytime you fight on that stage and come up short, you know going forward that you have everything to lose. Robert has a chip on his shoulder and he’s coming to prove that he’s still the man in the division.

“I can’t say enough about Rances Barthelemy. He’s already a two-division world champion with eyes on eventually winning a title in a third division. He knows on Saturday night he has his hands full. These two young guys are fighting for the same thing. They’re both world class fighters coming to show who the better man is.”