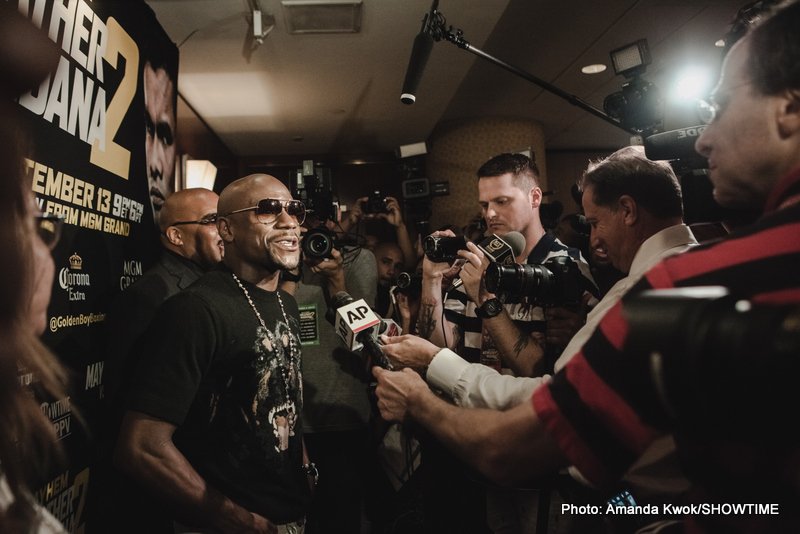 As fight fans may or may not have read, Richard Schaefer is back with a new promotional outfit, the former Golden Boy CEO set to launch Ringstar Promotions soon. And Schaefer, in speaking with Fighthub and Secondsout, said that the world of boxing “needs Floyd Mayweather back.”

Schaefer, with whom Floyd is both friendly and on good terms with as far as mutual respect goes, says he feels boxing is missing an ingredient today, and that the star power of “Money” would satisfy fans who have, as one-time Schaefer partner Oscar De La Hoya put it last week, endured “one of the worst years in boxing history” in 2016 – if he returned for a 50th fight.

“I think the more time passes, people are starting to realise, even those who did not like him….if they’re honest, I think we really miss him a little bit,” Schaefer said of Mayweather when speaking with Fighthub. “Of course, some miss him more than others, but I think we are realising how great Mayweather was for the sport of boxing. I would love for him to come back. But at the same time, I’m respectful of the fact that it’s his life. If Floyd were willing, we would make it the biggest global boxing event in the history of the sport. Bigger than Mayweather-Pacquiao.”

Bigger than “The Fight of The Century?” Mayweather-Pacquiao pulled in amazing 4.4 million pay-per-view buys last May and it’s crazy to think those numbers will ever be topped. But maybe, just maybe, if Floyd did come back in an attempt at scoring an historic 50th ring victory, fans would go crazy for the event – especially if Mayweather took a genuine risk in choosing his opponent (Gennady Golovkin, anyone! How monstrous would that fight be if it happened?)

But will Mayweather fight again, has he the urge and the desire to do so at the age of 40 (in February?) If Floyd does look to have one more fight, he might work with Schaefer in promoting the potential blockbuster. Schaefer certainly hopes so.

“I would be so freaking passionate about it,” Schaefer said.

But would the paying fans be as passionate?