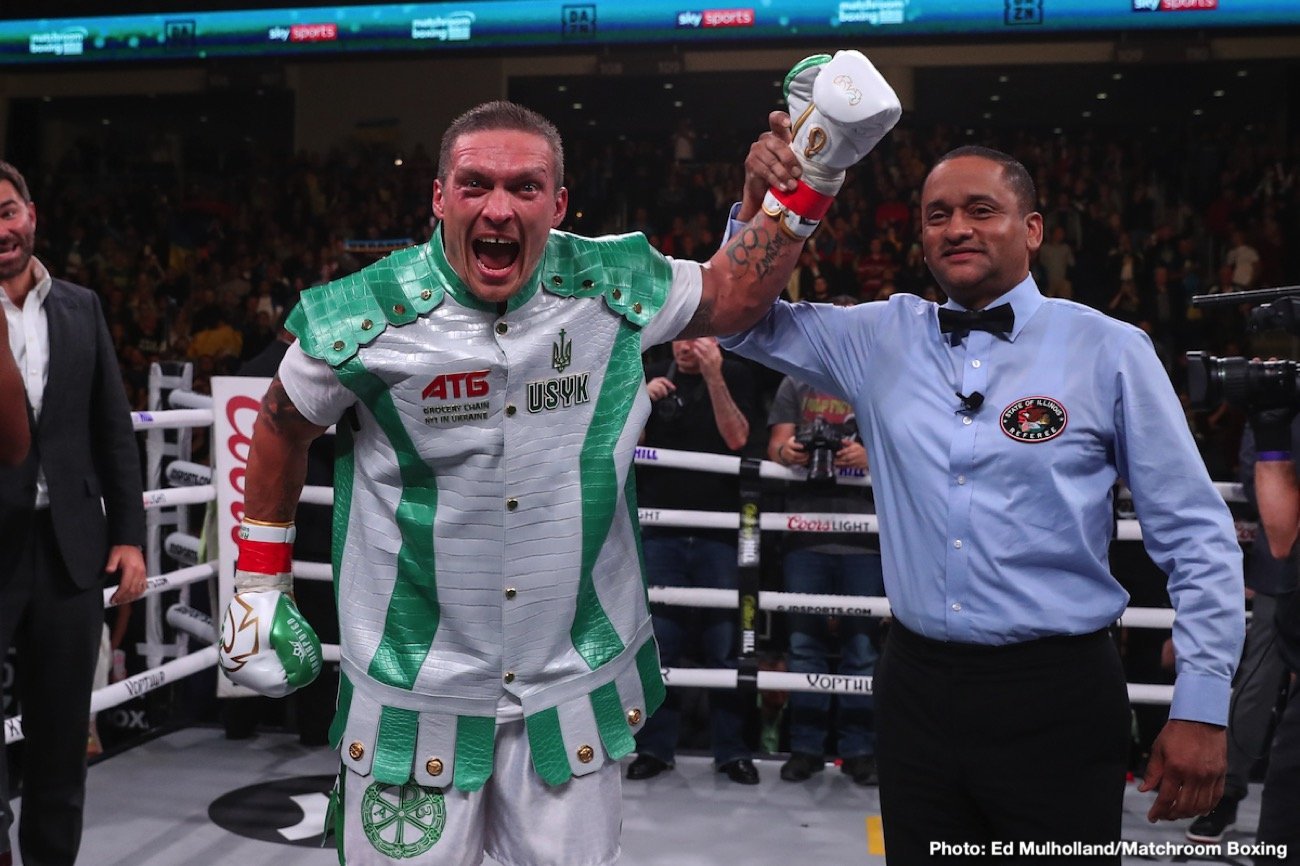 In front of a packed crowd of 9,073 at the Wintrust Arena in Chicago, former undisputed cruiserweight world champion Oleksandr Usyk (17-0, 12 KOs) turned in a commanding performance in his first professional fight in the heavyweight division. Usyk notched a technical knockout victory at the end of the seventh round over the battle-tested Chazz Witherspoon (38-4, 29 KOs). In the co-main event of the evening, Russia’s Dmitry Bivol (17-0, 11 KOs) made the sixth successful defense of his WBA World Light Heavyweight Title with a dominating unanimous decision victory over Lenin Castillo (20-3-1, 15 KOs).

Earlier in the evening, Otha Jones III (4-0, 1 KO) bested Eric Manriquez (7-9-1, 3 KOs) via majority decision in a tight four-round affair. Chicago’s Jessica McCaskill (8-2, 3 KOs) successfully defended her WBC and WBA World Female Super Lightweight titles in front of her hometown crowd with a majority decision victory over Erica Farias (26-4, 10 KOs). Arthur Biyarslanov (5-0, 4 KOs) bested Tyrome James (4-6-1, 1 KO) via unanimous decision in a back-and-forth affair which tested the mettle of the young prospect out of Toronto. Anthony Sims, Jr. (20-0, 18 KOs) extended his perfect record with a sixth-round knockout victory over Morgan Fitch (19-4-1, 8 KOs). In the first fight of the night on DAZN, Charles Conwell (11-0, 8 KOs) stopped Patrick Day (17-4-1, 6 KOs) in the 10th round.

Below are post-fight quotes and official results from this evening’s action on DAZN.

On his performance: “Listen, thank all of you people. I was waiting for this moment, we had some little difficulties because we have to change opponents. I didn’t show to nobody but I had some bad thoughts float into my head. I just prayed a little bit, I asked Him to help me and it looks like he helped me.”

On difference at heavyweight: “Yes, there is a little bit of difference but I used to fight as a heavyweight. But yes, it was different.”

On whether he could’ve finished the fight sooner: “I did what my trainer told me to do. I just follow their orders and that was to box. And I did box but if I had the opportunity, I would take that opportunity.”

On whether he is ready for Anthony Joshua, Andy Ruiz or Deontay Wilder: “I am ready, I am ready to fight whoever. If they give me the mandatory then of course I am ready to take it.”

On fighting in Chicago in front of a pro-Usyk crowd: “I love all of these people and I am fighting for them.”

On his performance: “First of all, I want to say thank you to everyone who supports me and watched the fight. Maybe there are people who say, ‘You are a boring fighter,’ or something like this. But I try to win and I won. Who wants to fight me? Who wants to try to beat me?”

On his 6th round knockdown: “I saw his fights before. He is really good at counter attacking. All five rounds before that, I tried to land that punch.”

On her performance: “Felt like a WWE wrestling match but I just wanted to come out here and brawl. I wanted to put on a good show for the fans and I don’t feel like they got a lot of that. I apologize but I am glad we got the win. Shout to my mom, shout out to Chicago!”

On the excessive holding: “The first fight was a lot of brawling, banging, boxing and movement. I thought that was what I was going to get tonight but I just realized that she was tired, she gassed a lot and complained a lot. She held me when my arms were in. She was tired and couldn’t really put on a performance tonight. I wish I could’ve given the crowd a lot more.”

On the scoring: “I was never concerned it was going to go the other way. I was not fully surprised at the draw. Like you said, it is difficult to score a fight like that but we got the majority win.”

On what’s next: “We are always looking for what’s next. McCaskill vs. Taylor 2. All the other belts. We are looking for names like Amanda Serrano. Big shout to Amanda for that win, I was out there in New York to support her. We’ve already been talking to her team about that fight. I am sure you would all like to see McCaskill vs. Serrano. We just want to keep the momentum in women’s boxing going and deliver high level fights.”

On his performance: “It was about 70%. I’ve been out for six months, I haven’t had a fight. I have a new team. But now I want to fight the big names. Rocky Fielding, if you are watching this – I want you next. Rocky Fielding in the U.K., mate.”

On potentially fighting Callum Smith: “Absolutely, but stepping stones. He is a champion for a reason and I want to make sure I build my way to that.”

On stopping the fight: For those that don’t know, it is one thing to watch a fight as a fan but it’s a different thing being in here. This fighter needs to get back to his family, to his kids, to his job. So if he doesn’t need to take any more punishment than necessary, get it over with. But a hurt man is a dangerous man so I have to do what I have to do.”