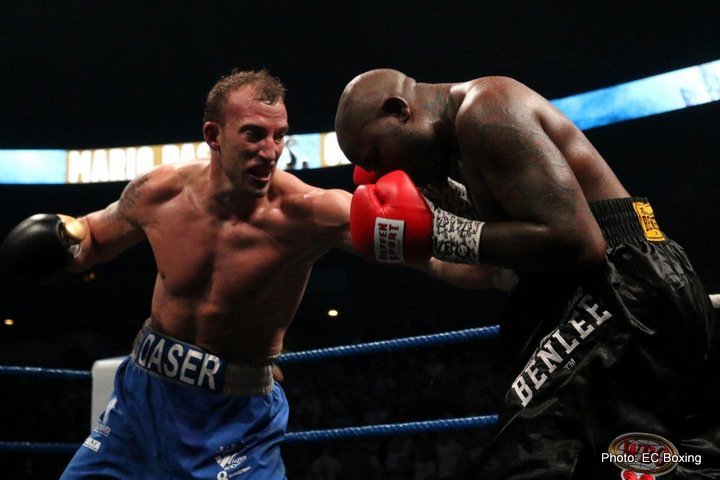 Afolabi took a knee and looked like he was getting ready to get back up. However, just at that moment, Afolabi’s corner came into the ring to have the fight stopped. Referee Frank Michael Maass then halted the fight at that point. The official time of the stoppage was at 2:00 of round 3.

Daser also knocked Afolabi down in round 2 with a left to the body.

Afolabi was pinned against the ropes at the time and just covering up like a sparring partner without throwing anything back at Daser. There were plenty of openings for Afolabi to land his shots if he had wanted to. Daser was leaving himself wide open for counter shots with the way that he was just wailing away at Afolabi with body punches one after another. It looked like Daser had gassed out at the time that he dropped Afolabi in round 2.

This was a strange fight to watch. Daser was just unloading on Afolabi with nonstop punches mostly to the body from the very beginning of the fight. The way that Daser was committing only to throwing body shots, it looked like he believed that this was the best and perhaps only way of hurting Afolabi. In Afolabi’s past fights, he’d never been attacked with body shots the way that Daser was attacking him. Even in Afolabi’s grueling fights with Marco Huck, he mostly dealt with head shots from the German fighter.

Daser took a different approach to beating Afolabi. He ignored Afolabi’s head and threw almost nothing but body shots. It was pretty impressive to watch. Daser reminded me of Aaron Pryor in the way that he used to attack his opponents. Pryor was a nonstop puncher who would gamble that he could knockout his opponents with nonstop punching before he would ever gas out. It paid off for Pryor most of the time, as he would work over his opponents with power shots until he knocked them out. Daser took the same approach in beating Afolabi.

This was Afolabi’s first fight since losing to Marco Huck last year in February 2016. Afolabi looked shot in that fight in getting stopped in the 10th. It was not the same Afolabi we’d seen in his previous fights against Huck. He didn’t seem nearly as inspired as he’d been in the past. In fighting Daser, Afolabi was coming off of a 15-month layoff. Afolabi didn’t look in great shape. He looked kind of soft and unmotivated.

It’ll be interesting to see where Daser goes from here. Does he challenge a top contender in the cruiserweight division? Daser vs. Huck would be a good fight. Huck would be a real problem for Daser, because he likes to fight guys that come straight at him the way that Daser did against Afolabi. Personally, I’d like to see Daser fight WBC cruiserweight champion Mairis Briedis. That would be an interesting match-up. However, I think it would end badly for Daser, but the German boxing public might like to see the fight.