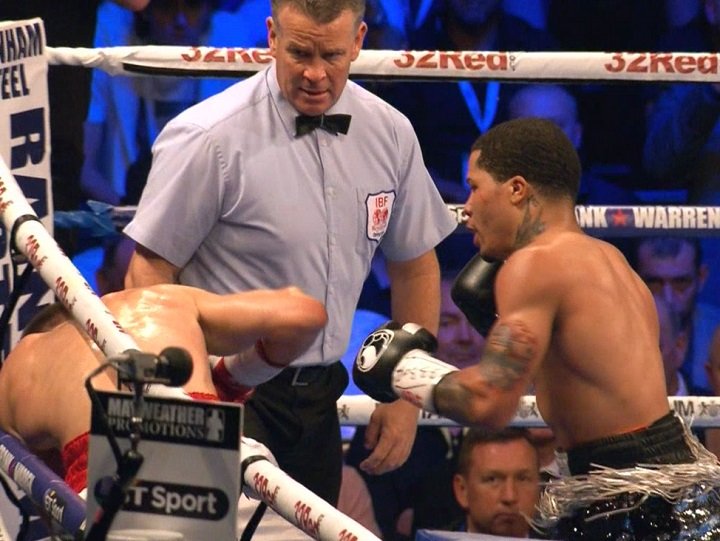 IBF World super featherweight champion Gervonta Davis (18-0, 17 KOs) showed off his class and punching power tonight in smashing Liam Walsh (21-1, 14 KOs) in destroying him by a 3rd round knockout in his first defense at the Copper Box Arena in London, England. The fight was quickly stopped after Davis flattened Walsh with 2 lefts to the head.

A shaken Walsh got back up and was hit several times by Davis with lefts. Referee Michael Alexander stepped in at that time to stop the fight at 2:11 of round 3. Walsh was none too pleased at having the fight stopped the way it was. He felt he was never given a sufficient amount of time to try and get through this rough period.

Walsh had a good point. The referee was quick on the trigger in stopping the fight when he did. Walsh hand taken a few shots, but he didn’t look like he was that hurt. and he was trying to get his arms around Davis to stop him from throwing punches.
There’s no word on whether there will be a rematch between the two. I suppose there won’t be enough controversy over the results of the fight for a rematch to take place.

There honestly wasn’t much to separate the two fighters before Davis hurt Walsh in round 3. Boxing 247 scored the 1st round to Walsh and round 2 to Davis. Going into round 3, they appeared to knotted up at 1 round a piece. Things suddenly went sour for Walsh in the 3rd round when he got clipped by a left hand from Davis that turned his legs to jelly.

Walsh’s first instinct was to pull back and cover up. However, Walsh was too slow to keep Davis from hitting hit with a follow up left hand that knocked him down. It was a swift, chopping shot that would have been difficult for Walsh to block given how hurt he looked. Walsh didn’t have his wits about him when Davis separated him from his senses with that beautiful left hand. It was a shot that Walsh did not handle too well. When Walsh started to get back up from the canvas, he looked like a drunken man who hand one too many drinks.

The looks of Walsh told me all I needed to know about his chances of survival after he got back up. Had Walsh done everything right after getting up, he might have made it out of the ring, but he didn’t do everything right. Walsh did everything wrong. He backed up to the ropes, cringed, and then took three big lefts from Davis to the head. The referee Michael Alexander had little choice but to stop the fight rather than waiting for the probable outcome.

“He was very smart and very quick,” said Walsh. “I’m gutted. I believe I should have been given another chance. It was stopped too quick. You’ve got to give him credit. The game plan was to get him in the middle rounds. I was bigger than him. I’m gutted. I’m far from being done. I’m so much better than that. I’m sorry. He hit me behind the ear,” said Walsh.