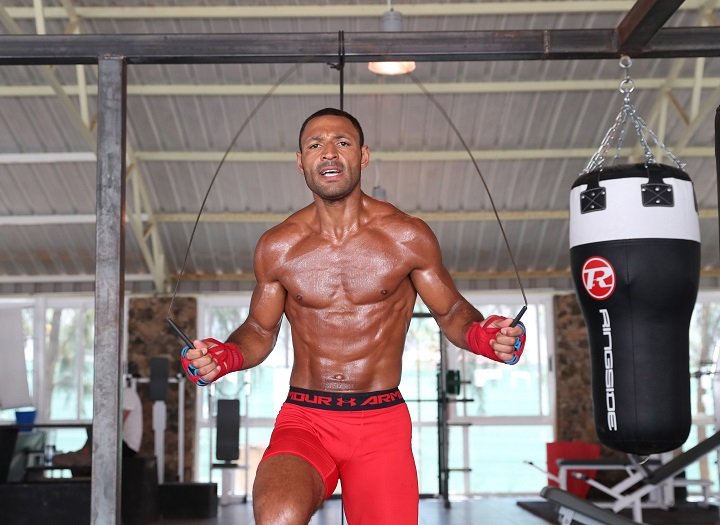 IBF welterweight champion Kell Brook didn’t bargain for how much work would be involved in getting down to 147 pounds for his fight against Errol Spence Jr. on May 27. Brook has been cutting for weeks and weeks since he started training camp following his 5th round knockout loss to Gennady “GGG” Golovkin on September 10 last year. Brook will have the hometown advantage over Spence in facing him at Bramall Lane in Sheffield, England. However, that may work against the 30-year-old Brook because the boxing fans might motivate him to brawl with Spence. If Brook is weight drained, he’s not going to last long against a puncher like Spence. Brook could be Chris Algieri 2.0.

Brook may have made a costly mistake in moving up to middleweight in more ways than one. Brook not only wound up with an eye injury from the Golovkin fight, he also put on a lot of weight that he’s had to battle hard to lose for him get back down to welterweight to defend his IBF title.
Brook has been working with his nutrition helper Greg Marriot to lose weight without weakening himself.

As of a week ago, Brook was down to 153. He’s likely dropped even more weight since then, and he should be able to make the 147 pound limit. Brook is looking thin right now as he drops weight, but he should be considerably heavier after he rehydrates for the fight. There’s always a possibility that Brook could weaken himself and end up like Julio Cesar Chavez Jr. did in his loss to Saul Canelo Alvarez on May 6.

Chavez Jr. was over 200 pounds when he started training camp for his fight against Canelo. Chavez Jr. was successful at cutting down to the 164.5 pound catchweight for the fight, but he was just a shell of himself by the time the fight started. Canelo had an easy time beating the thin-looking Chavez Jr. in a fight televised by HBO PPV. The question is does the same fate await Brook in his title defense against Spence?

“First, we put him on a strictly-controlled keto diet for a couple of weeks which burns fat. Then, at Sheffield Hallam University, we test his blood to see how many carbs he’s using. Then he goes on a low-carbohydrate high-protein diet,” said Marriot to skysports.com about the diet he’s had Brook on to get him ready for the Spence fight.

As good as Brook is, he might not be good enough to beat Spence no matter how well he makes the 147 pound limit for the fight. Brook didn’t look that great in his fight against Shawn Porter in 2014 in using calculated holding to keep the American fighter from getting his shots off. That was Brook’s toughest fight at welterweight, and he didn’t really prove that he could win without holding. S

pence is considered the next star in the welterweight division by many in the boxing world. Brook is seen in that same light and neither is Porter. Brook might not have the talent to beat someone like Spence no matter what the circumstances are for the fight. Even the best Brook might not be good enough to beat Spence. But it doesn’t look like Brook is going to be at his best for the Spence fight.

With Brook coming off an eye injury in his loss to Golovkin, it doesn’t look good for him to be fighting a dangerous young lion like Spence. The weight that Brook has to lose to get down to 147 for the Spence fight makes it even tougher for him. Things are kind of stacked against Brook in this fight. If he wasn’t coming off of an injury and if he didn’t lose all that weight, he might stand a better chance of beating Spence. I don’t know if Brook would, but he’d have a better chance than he does now.

There’s a real risk that Brook will be too thin and weak to handle the punching power and the immense pressure that the younger, stronger Spence will be putting on him on May 27.