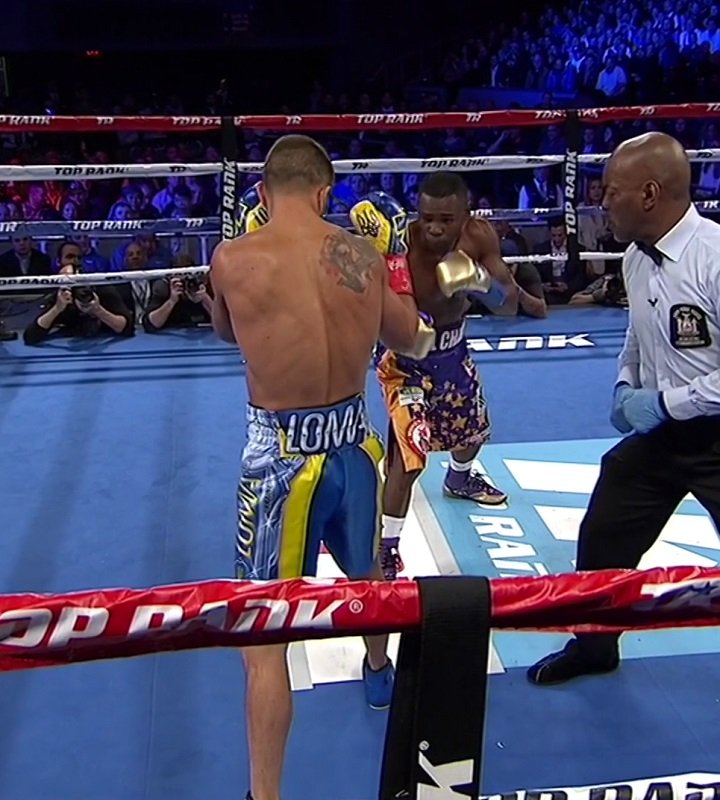 Lomachenko looked at least 20 pounds heavier than Rigondeaux. There was no way Rigondeaux was going to win the fight based on Lomachenko’s size advantage.

Rigondeaux chose to not come out for round 7 after complaining of an injury to his left hand. Rigondeaux was getting totally out-boxed by Lomachenko before the stoppage. It appeared that Rigondeaux was afraid to let his hands go in the fight for fear of being countered.

In round 6, Rigondeaux was docked a point for holding.

Lomachenko had predicted that Rigondeaux would pull a ‘no mas’ at some point in their fight, and I turned out to be the case. It’s not a good thing though for the many boxing fans that took time out in their lives to watch the fight and see the fight play out the way it did. Boxing fans want to see entertaining fights. Lomachenko vs. Rigondeaux was never at any time entertaining. It was more of a time waster with Lomachenko clowning, throwing weak punches to make contact, and using his size to push the smaller Rigondeaux around the ring for 6 rounds. Rigondeaux spent most of the fight trying to hold Lomachenko to prevent him from throwing shots. After the fight was over, Rigondeaux revealed that he had injured his left hand, which is his power hand, the 2nd round. Rigondeaux rarely used his right hand, so he was helpless after the injury occurred.

Lomachenko admitted after the fight that Rigondeaux was competing out of his weight class in fighting him at super featherweight rather than at super bantamweight, which is where Rigondeaux normally fights at.

“This is not his weight, so it’s not a big win for me,” Lomachenko said. “But he’s a good fighter. He’s got great skills. I adjusted to his style, low blows and all.”

Lomachenko didn’t mention his fouling, such as hitting after the bell, hitting after the break, and head-butting, to name a few. Lomachenko was just as guilty of fouling as Rigondeaux was. They were both stinking up the joint with fouling and not letting their hands go. The fight was never remotely entertaining to watch. It was difficult for this writer to resist flipping the channel to watch the far more exciting fight between super featherweights Orlando Salido and Mickey Roman.

“I think [Lomachenko is] the most unbeatable fighter I’ve ever had,” said Lomachenko’s promoter Bob Arum. “The only one that was different was [Muhammad] Ali before the 3½ years [he was idle].”

Lomachenko has already been beaten though by a prime Salido, so he’s obviously not unbeatable, as his promoter Bob Arum says. If the idea is to entertain the boxing fans, Lomachenko got a failing grade against Rigondeaux. Lomachenko was NOT Muhammad Ali like in the entertainment department. Arum needs to keep his eyes on the big picture. The boxing fans want to be entertained, and Lomachenko didn’t do his job against Rigondeaux. Lomachenko is an exciting fighter like Ali or Gennady Golovkin. He’s more of a showboat fighter in the Pernell Whitaker mold.

Overall, the Lomachenko-Rigondeaux fight was a disappointment. It wasn’t exciting to watch, as their was very little action. Rigondeaux never landed more than 3 punches in a round, and Lomachenko was mostly throwing weaker, speedy shots meant to just make contact. This was not Gennady Golovkin at his finest. Lomachenko was boxing, and using his size to wrestle Rigondeaux and walk him to the ropes. Lomachenko would use his head and stick it in the face of Rigondeaux each time he would clinch. Lomachenko also threw a lot of rabbit punches that he got away with in the clinch. The referee gave Lomachenko a lot of breaks for his fouling. The referee didn’t do the same for Rigondeaux.