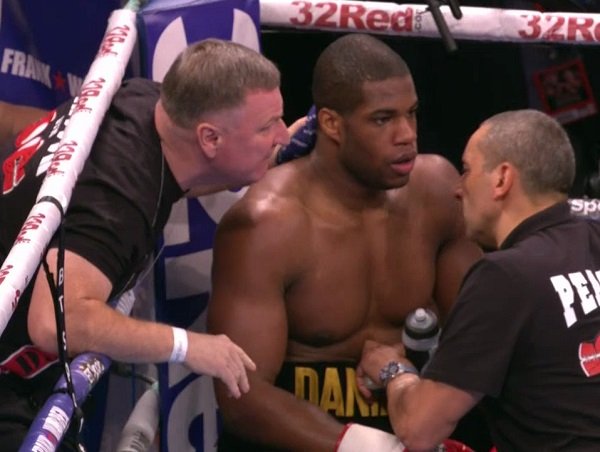 Unbeaten Heavyweight prospect Daniel Dubois (6-0, 6 KOs) picked up his 6th consecutive knockout in stopping journeyman Dorian Darch (12-6-1, 1 KOs) in the 2nd round on Saturday night at the Copper Box Arena, London, England. Dubois, 20, knocked Darch down 4 times in the fight with 3 knockdowns coming in round 3. The fight was halted after the 3rd knockdown in round 3.

Late in round 1, Dubois knocked Darch down with a big right hand.

Seconds into round 2, Dubois knocked the 33-year-old Darch down with a scorching right hand. Darch walked into the shot, and that made it a lot more devastating in power. Dubois had little respect for Darch’s power.

Once he had Darch hurt, Dubois was like a shark in attacking him with combinations. Less than 10 seconds after the first knockdown of round 2, Dubois knocked Darch down for a second time with a right hand. Darch was slow in getting up after this knockdown. The referee asked Darch to walk towards him to make sure he was okay, but he clearly wasn’t. The referee gave Darch a break by letting the fight continue. Dubois then landed one final right hand that dropped Darch for the third and final time in the round. The referee decided he’d seen enough at that point and halted the fight. I guess he could have let the massacre continue, but it would have been a comedy at that point. Darch would have kept getting back up until he was finally seriously hurt by Dubois.

Only 20-years-old, Dubois looks like a real threat to champions Deontay Wilder, Anthony Joshua and Joseph Parker. Dubois looks good enough fight now to beat top contenders like Dillian Whyte, Jarrell Miller, Alexander Povetkin, as well as champion Joseph Parker. Dubois appears to be a real talent. His promoter isn’t going to throw him in with any of those top fighters yet, but it won’t be too long before he finally steps him up. It’s important to have Dubois fight Joshua while he’s still on top, because the guy that replaces him might not be the same money guy as him.

Joshua defeated Darch 3 years ago by a 2nd round knockout, but he didn’t look nearly as impressive in stopping him as Dubois did tonight in flattening him 4 times in the bout.